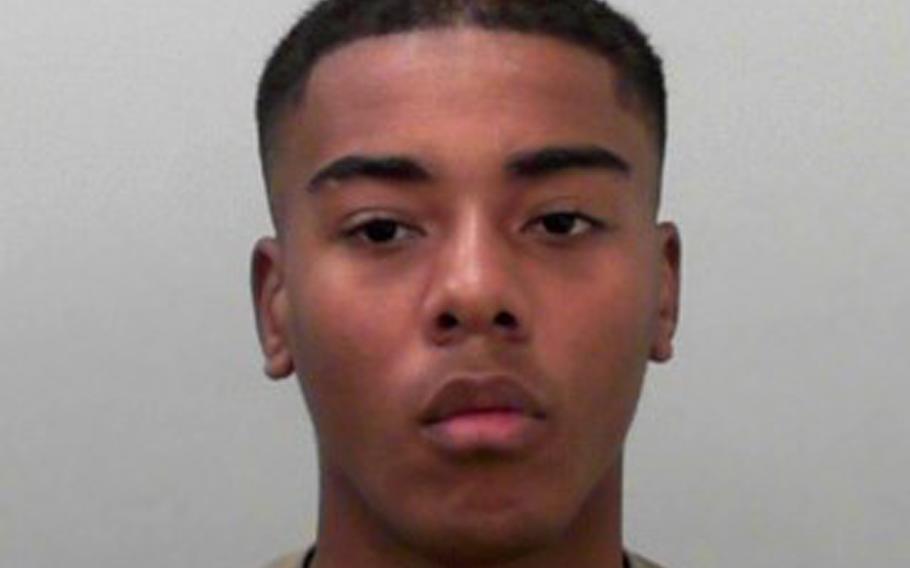 Through DNA evidence, witness testimony and information from a co-worker, investigators with the Killeen Police Department and Texas Rangers were able to link Spc. Cory Grafton, a 20-year-old assigned to Fort Hood’s 1st Cavalry Division, to the murder of 32-year-old Chelsea Cheatham, according to the law enforcement agencies and base officials. (Killeen Police Department)

AUSTIN, Texas — A Fort Hood soldier was charged with murder Tuesday in the death of a woman whose body was found more than a year ago at a motel in Killeen, Texas.

Through DNA evidence, witness testimony and information from a co-worker, investigators with the Killeen Police Department and Texas Rangers were able to link Spc. Cory Grafton, a 20-year-old assigned to Fort Hood’s 1st Cavalry Division, to the murder of 32-year-old Chelsea Cheatham, according to the law enforcement agencies and base officials.

A witness told detectives that Grafton was at the Days Inn on Central Texas Expressway when Cheatham died at about 11:35 p.m. on June 3, 2019, police said.

On the day that Cheatham died, police were called to the Days Inn at about 10:39 p.m. in reference to a woman who was unconscious and not breathing, according to police. Officers performed lifesaving measures, but Cheatham was pronounced dead about an hour later.

At that time, police were uncertain about her cause of death, but an autopsy ruled her death a homicide. Police provided no further details about the autopsy results.

Texas Rangers began assisting Killeen police on the case in September 2020 through a Department of Justice grant to expedite advanced DNA testing on sexual assault kits to help solve crimes such as Cheatham’s death, according to the Texas Department of Public Safety, known as DPS. After reviewing the investigation, Grafton was identified as a possible suspect. Investigators interviewed the soldier and collected a sample of his DNA.

“One of Grafton’s co-workers provided a statement to police that Grafton confessed to him about killing Cheatham,” according to the news release from DPS.

Investigators matched Grafton’s DNA to DNA found on Cheatham at the crime scene and obtained a warrant for murder on Tuesday, according to DPS. Grafton was arrested just after 4 p.m. and transported to the Killeen City Jail. Police did not say how Grafton knew Cheatham.

Killeen is located just outside the gates to Fort Hood in central Texas. About 36,500 soldier are assigned to Fort Hood, according to information from the Fort Hood Public Affairs Office.

After several high-profile crimes linked to the base earlier this year received national media attention, Army Secretary Ryan McCarthy visited Fort Hood and said the base has a higher number of violent felonies than other Army bases.