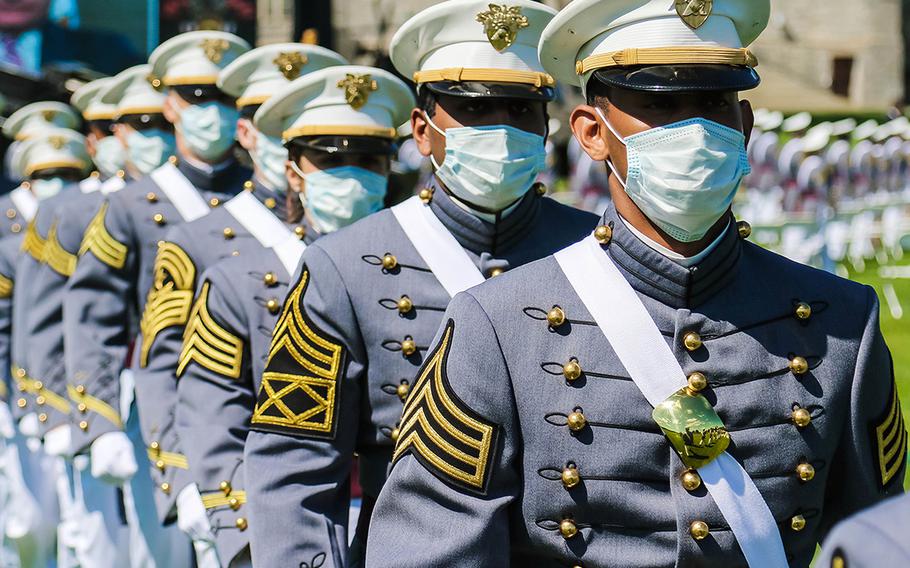 WASHINGTON — Recent U.S. Military Academy graduates implored leaders at the West Point, N.Y., institution to strongly condemn racism and institute a zero-tolerance policy in a letter that revealed some of them were victims of racist acts while attending the school.

In the June 25 letter to West Point and Army leaders, nine graduates of the academy from 2018 and 2019, including the top ranking cadets and graduates from both classes, condemned racism at their alma mater and urged leaders to introduce a curriculum meant to address race and diversity directly. The now-Army lieutenants, in a 40-page policy proposal included with their letter, documented such racist incidents including a noose left on a Black cadet’s dormitory desk “as a joke” by a white roommate, a top cadet leader’s photo altered to portray her as a monkey, and reports by dozens of Black cadets subjected to racial slurs by their classmates in recent years.

The policy proposal calls for West Point leaders to take specific steps to address “systemic racism [which] continues to exist at West Point,” and for the institution to teach anti-racism and provide space specifically for minority cadets on the campus.

“By failing in these areas, West Point ultimately fails to produce leaders of character equipped to lead diverse organizations,” they wrote. “In other words, West Point is failing to accomplish its mission.”

The authors ask that West Point leaders take a stronger public stance against racism, voice support for the Black Lives Matter movement, investigate any racial disparities in its disciplinary system, hire a full-time diversity chairperson, and publish 20 years of climate surveys that detail issues cadets report anonymously about their units.

They also called on the removal of Confederate-linked images on the campus, including honors erected in recent decades that list the names of West Point graduates who joined the Confederate cause. The policy proposal would strip West Point of “names, monuments and art honoring or venerating Confederate figures,” including a dormitory named for Gen. Robert E. Lee and artwork depicting Lee and Gen. Pierre Gustave Toutant-Beauregard, both West Point graduates.

The proposal also calls for a commission to study whether to “contextualize or remove” other symbols or depictions of “slavery, the Confederacy, and white supremacy” at West Point.

West Point officials said Tuesday that academy leaders had received the letter and policy proposal and the school’s inspector general had begun a “comprehensive review of all matters involving race at the academy.”

“The academy expects all cadets to be treated with dignity and respect. We take seriously all forms of racial inequality that marginalize or devalue members of our team,” said Lt. Col. Christopher Ophardt, West Point spokesman. “West Point does not accept, condone, or promote racism.”

But the authors of the letter – who include white and Black alumni -- argued Black cadets’ assertions of racist incidents went ignored and that, in at least some cases, Blacks faced harsher punishment for minor violations than their white peers.

Army 1st Lt. Simone Askew, one of the authors, detailed an act of racism that she faced just after she was named the first-ever Black, female top cadet in West Point’s history in Fall 2017. Askew wrote she came back to her dorm room one evening to find a photo of her altered with a monkey over her face.

"Though I was aware of the historical precedence of portraying Black people as monkeys, I wondered if the depiction suggested something deeper about my leadership," she wrote in the policy proposal. "Racing through my mind were all the presentations and conversations that I had given in the past 14 days as First Captain and whether I had made any mistakes. This self-interrogation fueled in me a paralyzing fear.”

Askew, a Rhodes scholar, wrote the incident left her feeling she could make no mistakes in her leadership. During her senior year, Askew was regularly made available by the academy for high-profile media engagements. She wrote her experience with racism led her to question what support West Point was providing other minority cadets who were not being “paraded by the academy as a model to follow.”

Another West Point graduate wrote in the policy that the academy failed to ready her to respond to civil unrest that spread throughout all 50 states in recent weeks after the May 25 killing of a handcuffed Black man by Minneapolis police.

“In the days following the killing of George Floyd and the resulting protests, I realized just how unprepared I was to have conversations about this with my soldiers,” wrote 2nd Lt. Ashley Salgado, a 2019 graduate from Puerto Rico and co-author of the proposal. “I had received plenty of instruction on how to brief and operations order or how to occupy a patrol base but West Point failed to train me on how to have important conversations about race within a diverse Army.”

The policy proposal’s authors wrote they took inspiration from the “Black manifesto” penned in 1971 by Black West Point cadets who successfully stopped a proposal by former President Richard Nixon to build a new Confederate monument at the institution.

They also wrote the proposal was meant as a quick response to a request issued last month by Defense Secretary Mark Esper for service members to provide his office actionable proposals to address racial injustice within the military.

Their proposal came as the Army has signaled it is open to a conversation aimed at renaming 10 of its southern installations named for Confederate generals. Legislative proposals introduced in both chambers of Congress aim to strip those post of those names, but President Donald Trump has threatened to veto any measure that would force such changes.

Meanwhile, Pentagon leaders have signaled they could soon issue an across-the-board ban on the display of the Confederate battle flag on military installations, ships and other sites. The Marine Corps earlier this year issued such a ban and the Navy is in the process of implementing its own. Army leaders said last month that they were working with Esper’s office on the issue, but would not immediately implement their own unilateral ban on Confederate imagery.

The West Point graduates wrote their policy proposal was a “call to action” and “now is the time for action.”

“To be sure, West Point has come a long way,” Askew wrote in the proposal. “Nevertheless, the reverence that West Point holds for racist figures is antithetical to the claims it makes about the next generation of Army leaders… If Black lives really do matter to the military – then that should be known. And, if they do, then that ought to be undoubtedly clear, as well.”