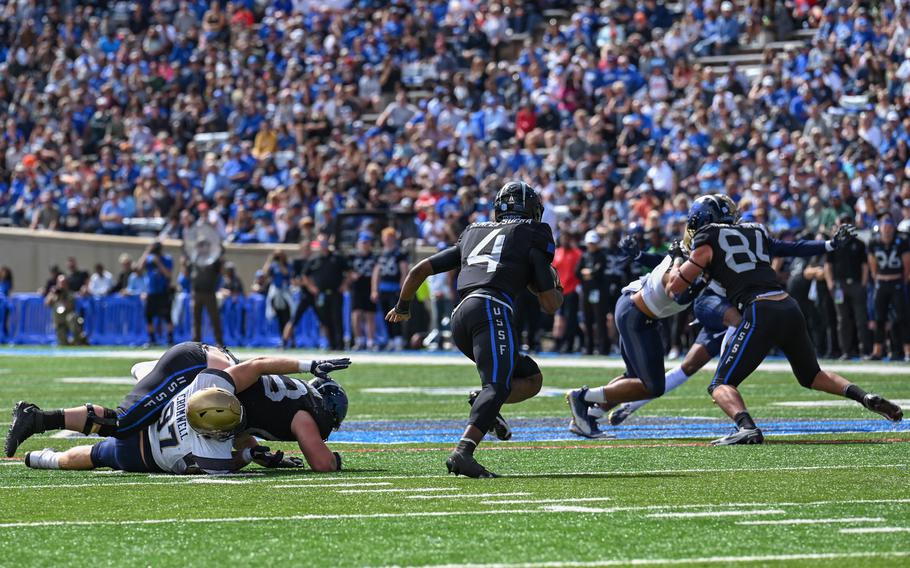 (Tribune News Service) — A tackle gone awry inside Falcon Stadium against Army in 1977 created a direct path to shovels hitting the dirt outside that same venue on Tuesday morning at the Air Force Academy.

That tackle, delivered with the crown of Jack Kucera's helmet, left Kucera unconscious on the field and with stress fractures to three vertebrae that were crushed straight down at top of his back. Kucera recovered fully, but the injury took away his pilot training spot. Two weeks before graduation, a medical council decided he was not commissionable.

With military service no longer an option, Kucera immediately entered the business world. His success, beginning with air conditioning and later including manufacturing and energy services, allowed Kucera and wife Vianne — the couple started dating two weeks before Jack entered the academy in 1974 — to donate $10 million to spearhead extensive renovations to the east side of Falcon Stadium.

"A lot of things I've been able to do for the Air Force Academy happened because I was fortunate enough to go here," Kucera said during a frigid groundbreaking ceremony in front of the stadium. "I do give the academy a lot of credit, and I'm glad to give back. I'm proud of it, but not in a boisterous way."

The renovations, which should be completed by the start of the 2024 season, will see the aluminum bleachers atop the bowl on the east side replaced by an enclosed club that will stretch from end zone to end zone with indoor seating, merchandise areas and open-air hospitality decks. There also will be a heritage plaza, new restrooms and concessions on the east concourse, and a new look to the stadium's entrance.

Athletic Director Nathan Pine noted that, in addition to hosting football and lacrosse games, graduation, concerts and special events, the stadium is the first thing that many people see of the academy as they look west on Interstate 25. This $90 million project, $35 million of which will be funded through philanthropic support and $55 million in debt taken on by the Air Force Academy Athletic Corp., will modernize the look of what he calls the academy's "front porch."

The assumption of debt is a departure from Air Force Academy norm and was a wrinkle that required approval from the academy superintendent on up to the Pentagon and secretary of the Air Force.

It has been a project more than a decade in the making.

"I'm the one here in this time when we get the shovel and get going, but a lot of people have worked a number of years very hard to get us to this point," Pine said. "I certainly won't be the one to take credit for that, but I take a lot of pride in renovating this stadium. It is going to be the revenue generator that drives our athletic department for the next generation. Football is that piece in every athletic department at the FBS [Football Bowl Subdivision] level."

"As a former Falcon football player, this is everything we can ask for from our school to support our athletic programs, our cadets, our fans, and I'm just thrilled, and very appreciative of our partners that have put in so much of their resources, their time and their energy to make it happen," Clark said. "So it's very exciting.

"The stadium hasn't changed dramatically since its inception, since it was built. Now I think people are going to walk in and the look that they're going to get with the backdrop of the mountains and a modern stadium in the setting of the Air Force Academy is just going to let people know what kind of an institution we are. We are first class. We are Division I. I think it will be representative of what we are as the Air Force Academy."

The short-term cost will be a 2023 season played in an under-construction stadium. The Falcons have already moved their 2023 game against Army to Denver, but will play the other five games (four Mountain West home games and the opener against Robert Morris) around the work being done on the east side.

Coach Troy Calhoun noted that Oregon State played this past season while its stadium's west side was undergoing a similar project, and the Beavers went 10-3 with a key home win over rival Oregon.

"It's an investment," Calhoun said, "but a small investment.

"It's gigantic in the sense that (recruits) realize how committed we are at the Air Force Academy in every endeavor that we pursue."

It's that bigger-picture approach that has motivated Kucera in his support of the academy. He became a pilot at age 52, and the next year he began flying Air Force football coaches on recruiting trips. He recently took Calhoun on 20 flights in five days to visit recruits.

Kucera's reasoning is simple: The academy changed his life, and he wants to help in any way he can to present that opportunity to others; particularly, those from underprivileged circumstances who find their way to the academy through athletics.

"Frankly, the lessons learned here, the leadership lessons you learn here, prepare you," Kucera said. "They prepare you for good times and hard times, so you know how to bear down when the pressure is on.

"If we had a country full of people who were trained in service before self, integrity, excellence in all we do, we'd be a better country."

And when it comes to pinpointing this project and deeming it worth an eight-figure gift, Kucera, who has found ways to repay the academy despite not being able to serve on active duty, offered another simple explanation.