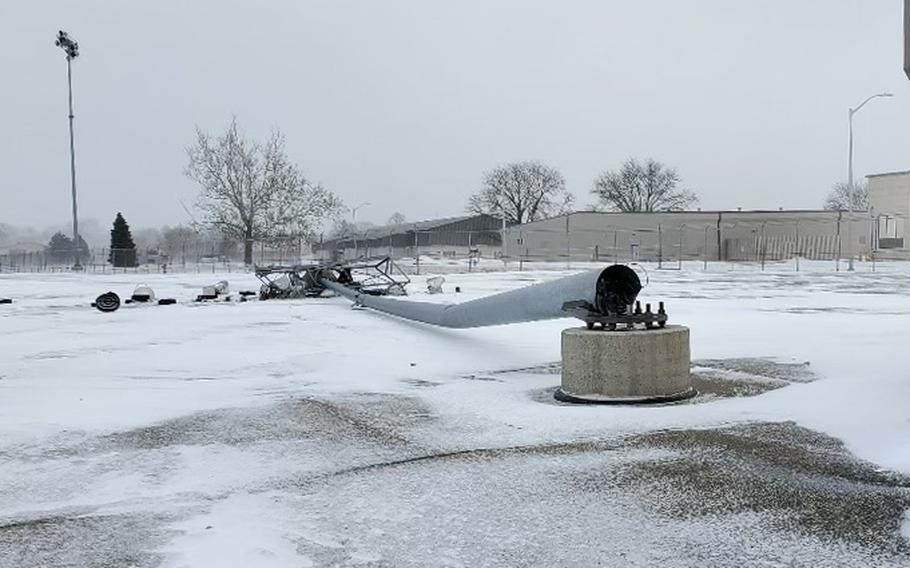 A light pole lies on the ground near Wright-Patterson Air Force Base’s flightline after it was blown over by high winds during a winter storm Dec. 23, 2022. The storm caused nearly $4 million in damage across both areas of the installation. (U.S. Air Force)

(Tribune News Service) — Last month's ice and snow storm caused about $4 million of damage at Wright-Patterson Air Force Base, with record cold and damaged pipes forcing the days-long evacuation of five buildings, the base said this week.

In all, the base's 88th Civil Engineer Squadron responded to calls at nearly 40 buildings on the installation, as the base described the situation in a new account.

The winter storm just before Christmas "wreaked havoc on Wright-Patterson Air Force Base infrastructure," the base said on its website. "The frigid cold and high wind gusts over multiple days caused nearly $4 million in damage across both areas of the installation."

A recounting of the damage on the base's website features photos of water leaking into the Wright Field Fitness Center lobby and base building 10. Photo captions attributed the damage to burst pipes.

Another photo shows a downed light pole near the base flight line.

The base account said personnel refrain from lowering thermostats at night during times of extreme cold. But burst pipes nevertheless resulted, as they did for many buildings elsewhere. Even the Ohio Statehouse in Columbus suffered extensive water damage last month.

The Dec. 23 winter storm broke a 50-year record in the Dayton region when a temperature of minus 9 degrees was recorded at Dayton International Airport, breaking a previous record low for that date in 1960, according to the National Weather Service in Wilmington.

A boiler at the base's Visiting Officer Quarters stopped working during the extreme cold, the base said. Personnel were forced to drain water systems and evacuate the buildings for multiple days.

Most calls reported freezing pipes but a light pole was also blown down, the base said.

The "uptick" in emergencies required deployment of additional personnel in order, the base said. Nearly half of the 88th Civil Engineer Squadron was running full-time during Christmas weekend responding to calls from both areas of the base, Daniel Jessup, squadron deputy, said in the base's account of the events.

The base statement credits the squadron's "preparatory actions and rapid response to mitigate damage, that dollar amount could have doubled or even tripled."

The base said it recorded its fastest six-hour temperature drop (39 degrees) and fastest 12-hour drop (52 degrees) since 1947.

Questions were sent to a spokeswoman for the 88th Air Base Wing, the host unit responsible for Wright-Patterson.

With two geographic areas separated by Ohio 444, Wright-Patterson is the largest single-site employer in Ohio, with more than 30,000 uniformed and civilian employees.

Last month’s ice and snow storm caused about $4 million of damage at Wright-Patterson Air Force Base, with record cold and damaged pipes forcing the days-long evacuation of five buildings, the base said this week. (U.S. Air Force)