Air Force nurse convicted at court-martial for groping another officer 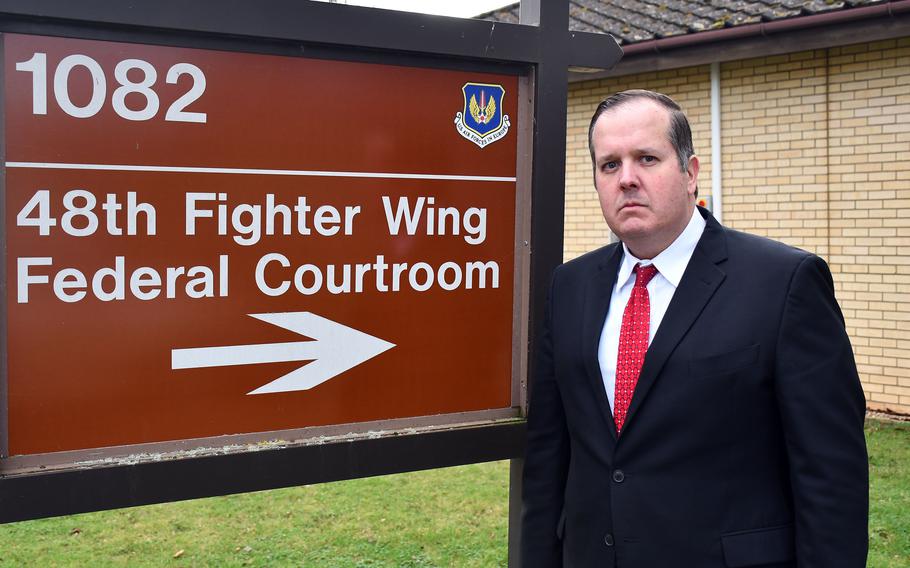 Defense attorney Sean C. Timmons outside the courtroom at RAF Lakenheath, England, Jan. 13, 2023, following the conclusion of Maj. Jorge A. Arizpe's trial. Arizpe was found guilty of charges related to groping a colleague and using unprofessional language while stationed at the base in 2021. Timmons said his client will appeal. (Kyle Alvarez/Stars and Stripes)

RAF LAKENHEATH, England — An Air Force officer who was found guilty Friday on charges related to groping a colleague two years ago will be reprimanded and spend just over a month in jail.

Military judge Lt. Col. Lance Smith ordered an official reprimand, forfeiture of $2,400 in pay and 35 days of confinement as punishment for Arizpe, who has been an Air Force nurse for 18 years, according to his civilian attorney, Sean Timmons.

The case against Arizpe resulted from two episodes in 2021, the first at a barbecue he hosted at his house in Bury St. Edmunds and the second a remark he made to a woman who is 20 years younger and married to a service member.

In the first instance, as the barbecue was winding down, Arizpe grabbed a female guest on one of her buttocks, the woman testified.

The woman, also an officer, pushed him away and said, “that’s enough.”

She testified that Arizpe chuckled and told her “I had to try” before trying to hug her.

“Maj. Jorge Arizpe violated me not only as a woman and colleague, but also irreparably broke my trust with my brothers and sisters in arms,” the woman testified Friday before sentencing.

A few months after the barbecue, Arizpe and Samantha Mindack, wife of an active-duty service member, were discussing their respective activities from the previous weekend.

Mindack testified that she said she had gone dancing with her husband in London and that she showed Arizpe photos and videos.

She testified that Arizpe then told her, “I’m going to say something that might be cringe, but you are the type of girl I usually go for. But I know there’s a line.”

Prosecutors argued that Arizpe knew what he was doing in both situations and that his disregard or lack of remorse immediately afterward indicated that his actions were intentional.

After sentencing, Timmons said his client shouldn’t have been put on trial. He added that this was the first time in his 15-year career that he’s seen a conviction under the article of the Uniform Code of Military Justice related to sexual crimes that resulted in a such a relatively mild sentence.

“The fact that the judge did not dismiss (Arizpe) from the Air Force after a conviction is a clear message that the government’s evidence was insufficient,” Timmons said.

Timmons said he intends to appeal the verdict.