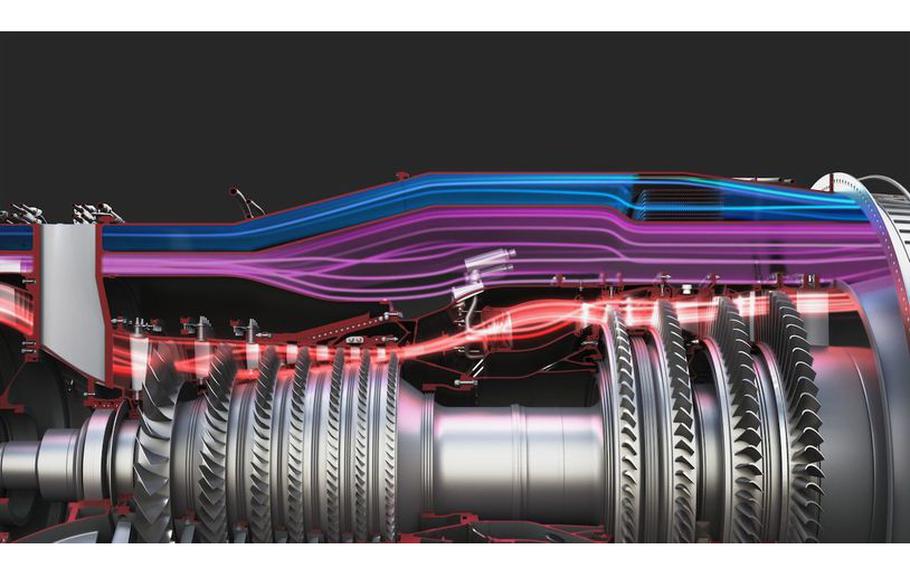 A GE representation of the XA100’s three-stream architecture. (GE Aerospace)

(Tribune News Service) — GE Aerospace is getting an Air Force Life Cycle Management Center contract with a value of up to $203 million for work on new jet engine technologies, the Department of Defense said last week.

General Electric has been issued an “undefinitized contract action” with a ceiling of $203 million for “technology maturation and risk reduction services,” and a $99.5 million cost-plus-fixed-fee contract for research and development, the DOD said.

The award came about four months after the Air Force picked five companies to develop prototypes of a next-generation fighter jet engine, with General Electric being among them at the time.

GE’s iteration of the engine is the XA100. The company says it is engineered to switch easily between high-thrust and high-efficiency modes, allowing it to adapt to just about any situation a military jet could encounter. The engine has been designed for use in the Lockheed Martin F-35A and F-35C.

GE’s engine is one of two in the program’s crucial testing phase, with Pratt & Whitney’s XA101.

Work will be performed in Cincinnati, and is expected to be completed Dec. 31, 2024.

The contract came from the Air Force Life Cycle Management Center at Wright-Patterson Air Force Base.

GE Aerospace is a big employer in Southwestern Ohio. Pre-pandemic, the company had about 1,500 employees working in four Dayton-area facilities, sites which saw a $1 billion total annual investment. About 9,000 Ohioans work for the company in total.

Also last week: Air cargo carrier ABX Air Inc. in Wilmington received another military contract, named as one of the companies being awarded a modification to increase the program value of the “global heavyweight service” contract by an estimated $67,198,500.