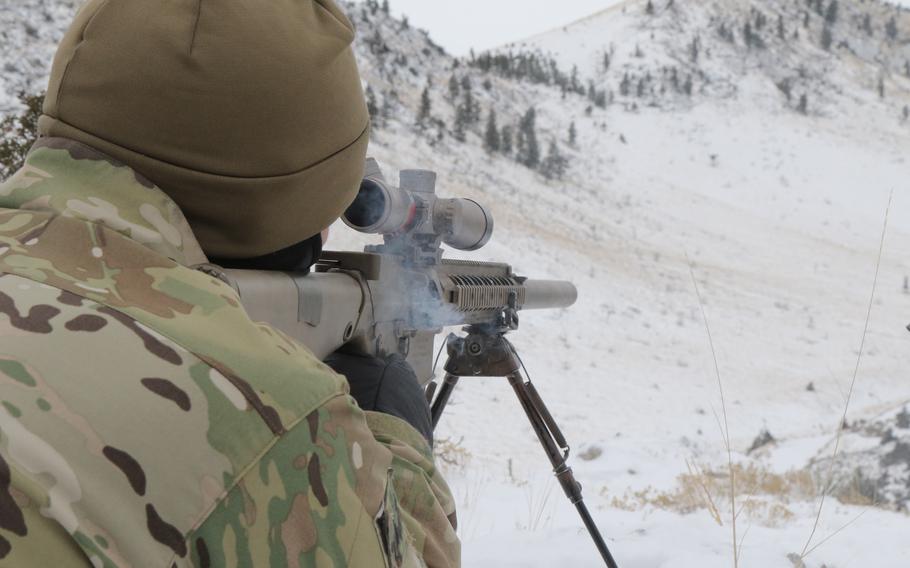 A Special Forces operator assigned to 3rd Battalion, 10th Special Forces Group (Airborne) fires a round at a target hundreds of meters away during sniper training Feb. 8, 2017, at Limestone Hills Training Area at Fort Harrison, Mont. The public comment period has been extended to Jan. 13 for a proposal to increase the use of the Limestone Hills Training Area to allow aerial gunnery practice by Malmstrom Air Force Base and Montana Army National Guard helicopters. (Craig Cantrell/U.S. Army)

(Tribune News Service) — The public comment period has been extended to Jan. 13 for a proposal to increase the use of the Limestone Hills Training Area on the east side of the Elkhorns in Broadwater County, Mont., to allow aerial gunnery practice by Malmstrom Air Force Base and Montana Army National Guard helicopters.

The environmental assessment, in which the U.S. Air Force is the lead agency, also calls for the creation of special use airspace restricted area for when military drills are underway.

An earlier deadline of Dec. 5 was extended when members of the public said there was not sufficient notice of the proposal.

A 348-page environmental assessment filed in November and done in cooperation with the U.S. Army Corps of Engineers has found the proposal to have a "finding of no significant impact," also known as FONSI.

But the head of the Montana Pilots Association says the calls for restricted air space could pose problems for private pilots who unknowingly violate the order due to insufficient notice.

As the operator of the Limestone facility, the Montana Army National Guard has requested the FAA establish a joint-use restricted area airspace to authorize helicopter aerial gunnery training for "multiple" Department of Defense service branches.

The assessment notes Malmstrom's 40th helicopter squadron and 341st Missile Wing Security Forces Group are tasked with the defense of the Minuteman II Intercontinental Ballistic Missile complex and there are no aerial gunnery ranges in Montana where they practice.

They now fly 480 miles from Malmstrom to Utah to get to the nearest range to practice, officials said. This brings costly out-of-state deployments and limits training due to costs, distance and impacting "the home mission."

The notice states Limestone Hills is the only federal training range near Malmstrom and that Montana Army National Guard aircrews also train out of state and could benefit from a range closer to home.

Katie Rediske, National Environmental Policy Act (NEPA) manager at Malmstrom, said the proposal does not expand the training area and the military would be restricted to 140 days a year, due to the nearby big game wintering range. She said they are working with the FAA on limited airspace. The airspace would be limited to two- to three-hour allotments during the 140 days

Proximity to Montana facilities is a key reason why they want a range so close, Rediske said, adding that personnel can fly down in one day, do their training and fly home. The report notes participants can fulfill their training within a 12-hour period.

The final decision rests with the Wing commander.

However, Bozeman resident Michael Vivion, who heads the nearly 400-member Montana Pilots Association, said the environmental assessment was not well researched, adding those who compiled it did not talk to aviators outside the Federal Aviation Administration.

And Vivion, a retired wildlife biologist who spent much of his career in Alaska, said the extra firing of military rounds could send thousands of pounds of lead into the environment and in the proximity of the Missouri River.

He said the report makes no mention of how to remediate it.

Vivion said the noise would also impact Townsend residents, who live within five miles of the facility.

But he said he was most concerned about the restricted airspace and proper notification to pilots of such an order. He said many pilots fly without filing flight plans.

"How do you find out if it's active?" he asked.

Vivion said they need to put some kind of radio broadcast in the Townsend area and near the shooting range to say if restricted airspace is active or not.

"All they have to do to keep pilots happy is to put something like that out of Townsend," he said, adding it's a "good neighbor" gesture. "When the helicopters are flying, flip a switch and send out a message."

He said most pilots would then not have a problem with restricted air space.

Vivion also questions the air traffic estimates. He said the assessment states about 24 general aviation aircraft fly through that airspace each year.

He said according to his log books, he has flown through that immediate area seven times in 2022 en route to Helena.

He believes the number to be in the hundreds and that the report looked at high-altitude flights and not any traffic at altitudes that general aviation typically flies.

Vivion also said the assessment did not consider other alternatives, such as other bombing ranges in eastern Montana.

"Why fly 200 miles from Malmstrom when they could probably do something in their own backyard?" Vivion asked, adding the "500-pound gorilla in the room" is there are places they did not even consider.

He also fears that military based in other states will come to the range.

"There is no guarantee this will be the only use," Vivion said, adding that provision needs to be added.

Rediske said there has been a mix of comments, with some people in support of the proposal.

But she said officials decided to extend the comment period when people said there was not enough public notification.

Like Vivion, he also said there was a lack of public notification and questions the content and thoroughness of the assessment.

Korn said he stumbled across the news that the EA (assessment) had been released only by serendipity, glancing at the legal notice section of the Sunday IR classified pages back in early November.

Korn said the document is likely something that, with some modifications, can be accommodated, "but only if it is properly analyzed, considered and designed."

Copies of the assessment have reportedly been placed at libraries in Helena, Townsend and Great Falls.

Read the environmental assessment for the Limestone Hills Training Area.