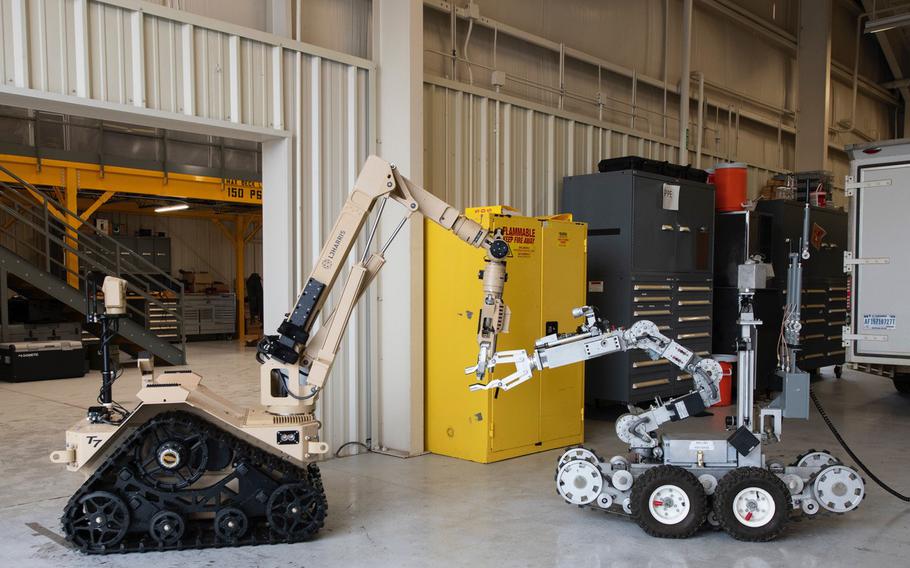 The T7, left, the newest explosive ordnance disposal robot in the Air Force, operates next to its predecessor, the F6A, at Eglin Air Force Base, Fla., on Aug. 25, 2022. (Ilka Cole/U.S. Air Force)

The 1st Special Operations Civil Engineer Squadron at Hurlburt Field, Fla., was the first to train with the new robots in August at Eglin Air Force Base, Fla.

“The world’s most capable robot for challenging EOD tasks where speed and precision is required, the T7 will help safeguard Air Force EOD operators as they mitigate explosive threats around the globe,” Ed Zoiss, president of L3Harris space and airborne systems, said in the release.

L3Harris Technologies, headquartered in Melbourne, Fla., is one of the biggest defense contractors in the United States, according to ExecutiveBiz.com, a news site that covers the contracting business. It provides advanced defense and commercial technologies across space, air, land, sea and cyber domains. It has more than $17 billion in annual revenue and 47,000 employees, with customers in more than 100 countries, according to the L3Harris website.

Nearly every feature of the T7 has been improved upon from its predecessor the Remotec Andros F6A, Dennis Carson, the EOD logistics program manager at the Air Force Civil Engineer Center, said in an Air Force news release Aug. 29. Remotec is a subsidiary of Lockheed-Martin. 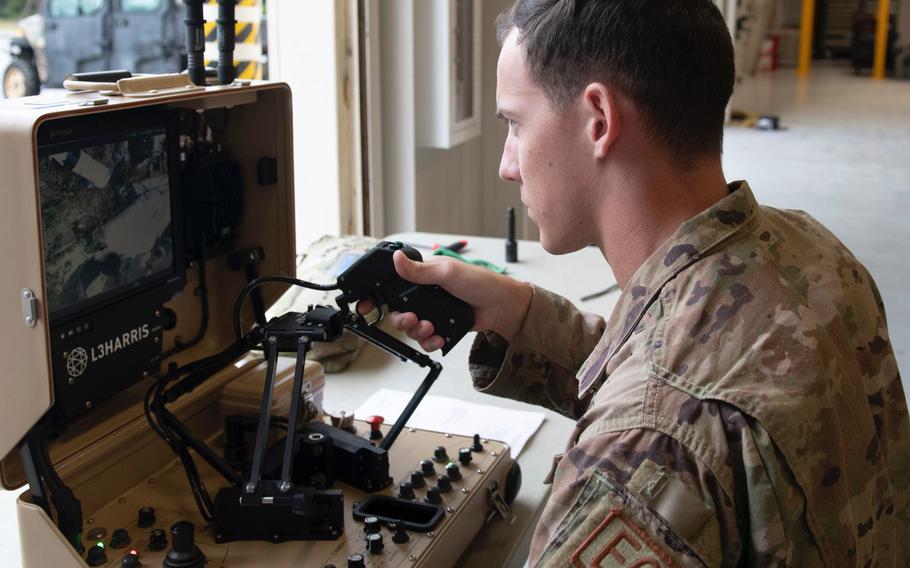 The T7 is twice as fast at top speed and has twice as many higher resolution cameras than the F6A, according to the Air Force. The robotic arm is capable of lifting objects five times heavier with increased vertical and horizontal reach. The T7 battery lasts four times longer than its predecessor and its radio has 10 times the reach.

“All of these features allow the EOD operator to deal with larger hazardous devices in less time than before, which ultimately improves the safety of EOD personnel,” Carson said in an Aug. 31 Air Force release.

The T7 also offers a more modular design that allows users to repair it by swapping subassemblies rather than individual parts, an issue that plagued the previous robot, according to an Air Force news release Oct. 18, 2021.

“We’re keenly aware of what’s at stake for these operators and constantly refine and enhance our robotic systems to minimize risk and maximize utility during these dangerous, no-fail missions,” the company quoted Zoiss as saying.

This year alone, the Defense Department has awarded L3Harris more than $30 billion in contracts that included optical-infrared sensors for the Navy, portable communications gear and overwatch aircraft for Special Operations Command and satellite communications equipment for the Army, according to ExecutiveBiz.com.