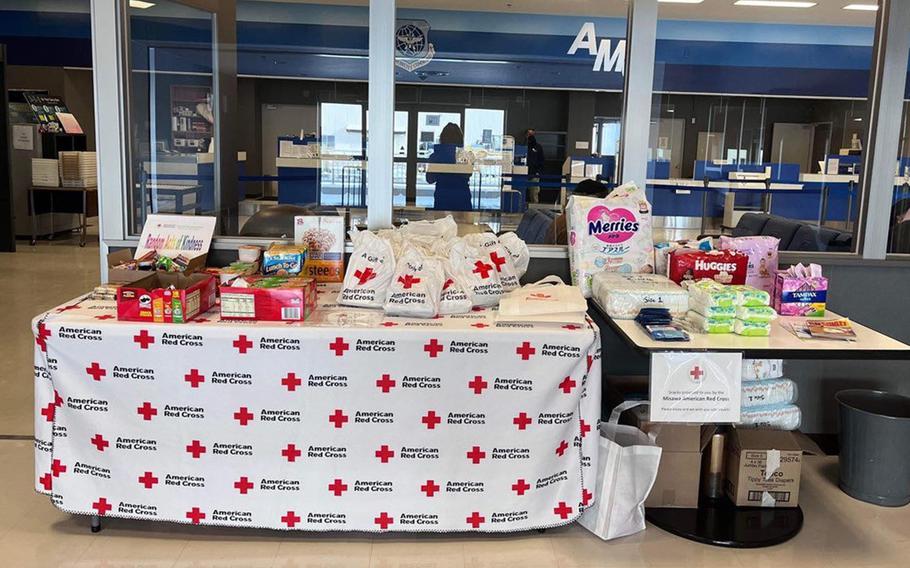 “When they got to us, their crew duty day ended here,” he said.

The Patriot Express is the government-contracted air service that flies service members and their families between the United States and its overseas bases in Europe and Asia.

A crew duty day is the maximum amount of time that crewmembers are allowed before a required rest period, according to the Electronic Code of Federal Regulations website.

On Wednesday, bad weather and problems deicing the airliner caused another delay, according to Coombs.

The aircraft made it as far as the end of the runway before turning back, he said.

“It was snowing pretty heavily,” he said. “The pilot called it because it was coming down too much, so he canceled and turned around and came back.”

The American Red Cross at Misawa mobilized volunteers and other agencies to provide the stranded passengers with basic hygiene kits, diapers and snacks provided by the commissary, Lorie Warchol, the Red Cross station manager, told Stars and Stripes by phone Friday.

“There were almost 200 people that the base had to try and accommodate,” she said.

The Patriot Express finally departed at 5:58 p.m. Thursday, Coombs said. He said the Misawa First Sergeants visited the passengers that day with cookies.

“They were able to get out last night, but it was a really long three or four days for those families that came out of Osan that didn’t have anything,” Warchol said. “We are going to partner going forward with Military Family Readiness Center and the commissary to have some donation points around the base so when things like this happen, we have stuff stocked and ready to go.”