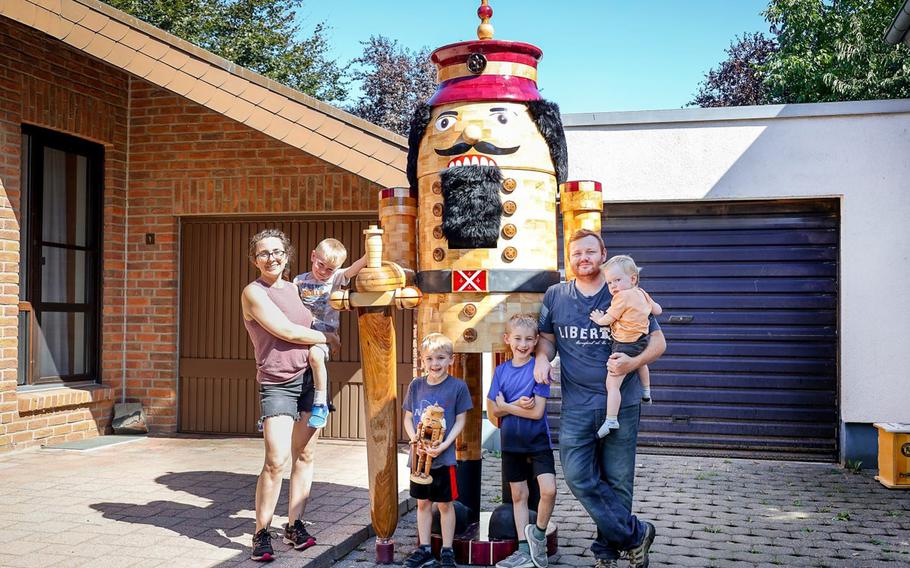 Air Force Capt. John Miller, his wife, Jenna, and kids, left to right, Samuel, Flynn, Davy and Harlan, stand next to the giant nutcracker Miller built while assigned to Geilenkirchen Air Base in Germany. (John Miller)

KAISERSLAUTERN, Germany — It stands over 9 feet tall and can smash just about any fruit or nut in its wooden mouth.

The giant nutcracker built by U.S. Air Force Capt. John Miller might frighten the Mouse King, but it’s already delighted kids at Geilenkirchen Air Base, who used it to crush pumpkins for Halloween.

And on Friday, it will be unveiled at the Christmas market in Huecklehoven.

Miller painstakingly crafted the giant toy soldier in his garage for 14 months while juggling time in his job as an air battle manager on NATO Airborne Warning and Control System aircraft.

He presented his handiwork to Rurich, the village near Huecklehoven where he and his family have lived since January 2020. Huecklehoven will store the nutcracker and display it at holiday festivals for years to come.

“Our neighbors were always fantastic and cordial,” Miller said. “We knew right away that we would build something for them as a token of our gratitude, but it was a bit tough to think of something they could use or cherish.”

Miller, 37, learned how to work with his hands from his dad, who was handy with house repairs.

He didn’t discover his knack and love for woodworking, however, until about eight years ago, when he and his wife were expecting their first child, the first in a line of four boys, each two years apart. Miller made a bassinette from wood with hand tools.

“It’s a passion that’s just grown from there,” he said.

Since then, he’s built the hull of a 21-foot flats boat, a bike trailer and a clock, among other things.

Along the way, he and his wife started a foundation to financially support families looking to adopt. Its Instagram handle is @makersforadoption.

Miller himself was adopted, and he has donated profits from his projects to families trying to adopt. He also has partnered with other woodworkers to raise money. 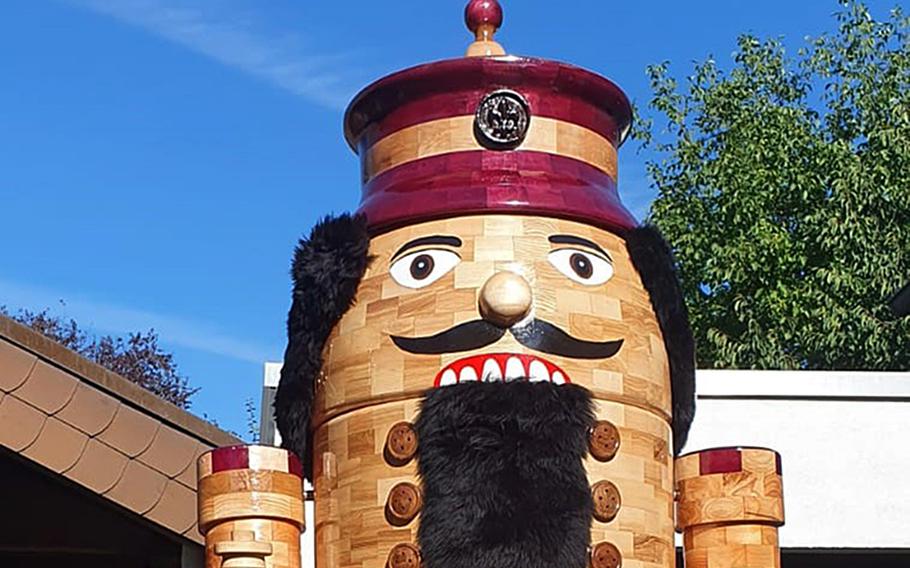 This giant nutcracker built by Air Force Capt. John Miller will be displayed during the city of Huecklehovens annual holiday festivities, including the Christmas market, which opens Nov. 26. (John Miller)

Miller modeled his nutcracker on a secondhand one he bought in the Netherlands. He borrowed some techniques from a woodworker he found on YouTube who built a 6-foot nutcracker. He decided to make his bigger, but he didn’t have a blueprint for how to construct it.

He knew he didn’t want to build one solid piece.

“There was a lot of time sitting back drinking a beer with a friend, trying to figure out how we would build this to where you could actually take it apart and put it back together again,” so it could be easily transported, he said.

The different-colored wood gives the nutcracker a natural contrast. Only a few pieces were painted.

It’s weather-resistant, with sheep’s wool for hair and a beard. The body is reinforced with fiberglass, and epoxy was applied to the surface.

Friend and fellow woodworker Lt. Col. Kurtis Kuschel, an air battle manager at Geilenkirchen, pitched in on some of the more intricate pieces.

Kuschel used a lathe to turn the hands and the decorative balls on the sword, and with a special computer-driven machine, he crafted the belt buckle, buttons and crown emblem, Miller said.

In between the sawing and gluing in Miller’s garage were deployments.

“It was about half-built when everything kicked off in the east,” he said, referring to Russia’s full-scale invasion of Ukraine in late February. “It was definitely a challenge and very time-compressed.”

Miller estimates 400 hours of work went into the project, much of that time spent waiting for the glue to dry.

The biggest challenge was giving the towering toy soldier a low center of gravity so it wouldn’t topple over. The initial result did not appear promising, despite Miller’s assuredness in the accuracy of his calculations.

He solved the problem by adding steel plates to the bottom and filling the legs with rocks.

His nutcracker withstood its first real-world test when kids took turns smashing pumpkins with it at Geilenkirchen’s Trunk or Treat earlier this year.

“It just shifted maybe 6 inches on the ground,” he said. “It’s pretty stout.”

The project ended up costing in the range of 5,000 euros, about twice what Miller estimated, but he’s pleased to see it finished before his family moves back to the U.S. next month.

The recipients are excited to include the nutcracker in their holiday festivities as a symbol of the partnership with the Americans in and around Geilenkirchen, said Holger Loogen, a spokesman for the Hueckelhoven mayor’s office.

“It’s a perfect fit for our Christmas market and our fall light festival, where it will be presented for six weeks,” he said.

The progress on construction of the nutcracker is shown in videos on Miller’s Instagram page at https://www.instagram.com/dfswoodworksllc/.