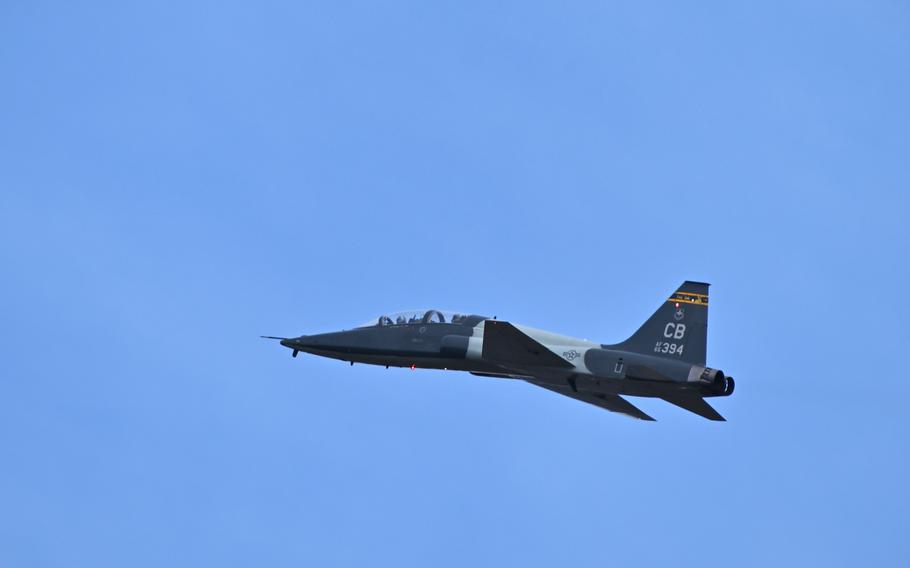 An Air Force training jet crashed Monday afternoon near Columbus Air Force Base, officials at the Mississippi base said.

The pilot of the T-38C Talon experienced an “in-flight emergency” about 20 miles south of Columbus AFB before safely ejecting from the aircraft, according to a statement from base officials. The cause of the incident was under investigation as of Monday afternoon, officials said.

The pilot was transported to a local hospital for evaluation, they said.

“We continuously train our pilots to react appropriately for all emergency situations such as the incident that occurred today,” Col. Jeremy Bergin, the vice commander of the Columbus AFB-based 14th Flying Training Wing, said in a statement. “We’re thankful the pilot ejected safely, and we appreciate the continued support of the Columbus community and our community partners.”

Columbus Air Force Base is in eastern Mississippi about 150 miles northeast of the state’s capital Jackson. The pilot-training base falls under the Air Force’s Air Education and Training Command, and student-pilots assigned to the base’s 14th Flying Training Wing fly the T-38, T-6A Texan II and the T-1A Jayhawk aircraft, according to the service.

The T-38 is a twin-engine, high-altitude, supersonic jet trainer that the Air Force uses to train pilots to fly its front-line fighter and bomber aircraft including F-15, F-16, F-22 and F-35 fighters, A-10 attack jets and B-1 bombers, according to the Air Force.

Air Force flight students have flown the T-38 since the 1960s. The service in 2019 announced the jet’s replacement, the T-7A Red Hawk, would begin replacing the antiquated T-38 in 2023.

Air Force officials have said the T-38 lacks the modern capabilities of the newest Air Force jets such as the F-35. Top service officials said such problems will be fixed with the more modern trainers being sent to flight schools.

The service’s T-38 fleets have been plagued by crashes in recent years. A student pilot was killed in November 2021 when two T-38s from Laughlin Air Force Base in Texas crashed into each other. Two Columbus AFB-based pilots — an American instructor and a Japanese student — were killed in a T-38 crash earlier that year, when their jet crash landed at Montgomery Regional Airport in Alabama.

Air Force officials have reported at least six other T-38s had crashed since November 2017.