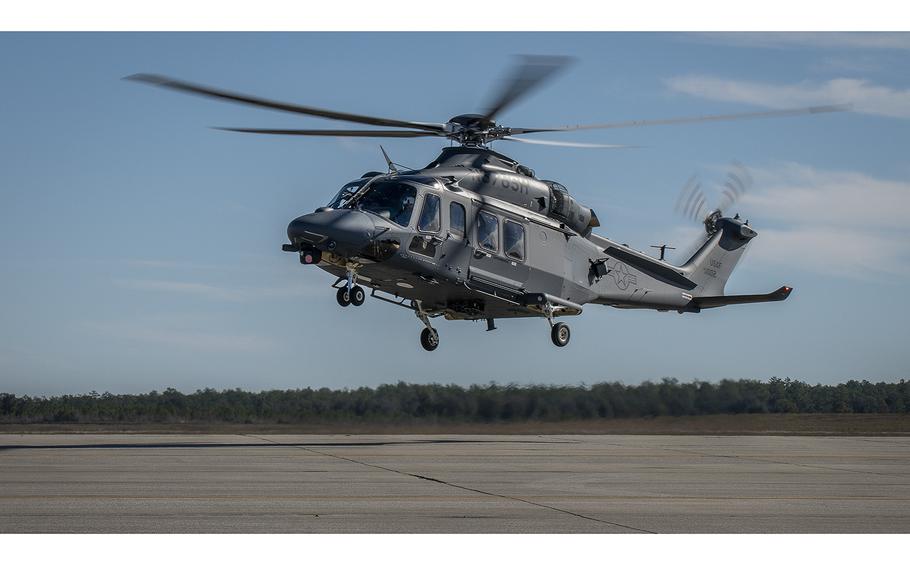 The MH-139A Grey Wolf lands at Duke Field, Fla., Dec. 19, 2019, before its unveiling and naming ceremony. The aircraft is set to replace the Air Force’s fleet of UH-1N Huey aircraft and has capability improvements related to speed, range, endurance and payload. (Samuel King Jr./U.S. Air Force)

Stops were also made at Warren Air Force Base in Wyoming and Minot Air Force Base in North Dakota — on the way back from flight testing in Colorado, officials said, adding that military personnel were able to check out the new aircraft bound for their bases in the not-so-distant future.

Boeing was awarded a $2.4 billion contract in 2018 for 84 helicopters, training systems and associated support equipment.

The Grey Wolf is a multi-mission aircraft — based on the proven commercial AW139 helicopter — designed to protect intercontinental ballistic missiles and transport U.S. government officials and security forces.

They will replace the Vietnam-era Bell UH-1N Hueys that now protect the ICBMs. Boeing officials said the Grey Wolf has a 50% increase in cruising speed and range, 30% larger cabin and an additional 5,000 pounds of lift capability than its predecessor. It also has state-of-the-art avionics with full autopilot mode, advanced flight deck functionality and lower operating and support costs. It also has better flexibility and improved safety.

Funding for the helicopters was through the 2017 National Defense Authorization Act and the Defense Appropriations Bill. It is the first major acquisition for the command in its 10-year history, Air Force officials said.

The Air Force dubbed the MH-139A helicopter the “Grey Wolf” during a 2020 naming ceremony at Duke Field, Florida.

It was derived from the wild species that roams the northern tier of North America, which also encompasses the intercontinental ballistic missile bases, Air Force officials said.

Visit the Independent Record at www.helenair.com