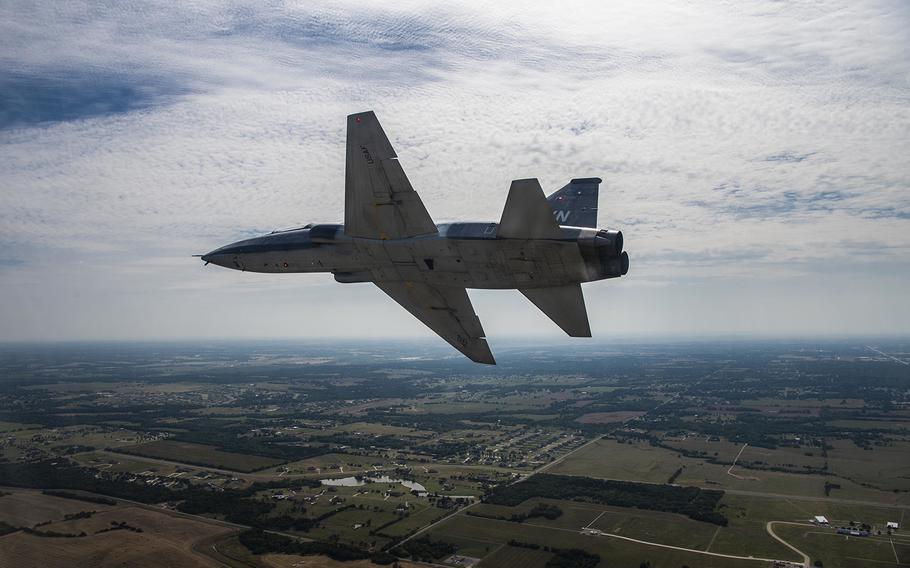 A pilot from the 71st Flying Training Wing soars through the sky in a T-38C Talon, July 26, 2019, over Oklahoma. The T-38 Talon is a twin-engine, high-altitude, supersonic jet trainer used in a variety of roles across the Air Force. (Taylor Crul/U.S. Air Force)

One upcoming change involves the aircraft used at the pilot training base.

Johnson also talked about some of the challenges that Vance has seen of late. He said the type of planes that are used to train pilots are starting to be phased out for newer aircraft.

Pilots currently train on the T-6A Texan II, the T-1A Jayhawk and the T-38C Talon. The Air Force, though, is phasing out the T-1A, and the T-38C will be replaced in the coming years by the T-7A Red Hawk. Vance will be the third Air Force base to receive the T-7A, Johnson said, but won't receive them until around 2031. He said the current planes will be in use for the next few years, but when they start to have less of them on the base, it will change the jobs that are available.

Trying to work through the change in aircraft, as well as factoring in the use of simulator training, creates some hurdles for Vance as it tries to work toward accommodating pilots for the T-7A, he said.

Johnson also said the Air Force is investing hundreds of millions of dollars into Vance, which also directly impacts the Enid community.

A revamp of Enid Woodring Regional Airport will allow for the Vance mission to be enhanced, he said, as their civilian airport effectively serves as a fourth runway for Vance, which will allow for more efficient training and resource management. The Woodring project consists of three major upgrades costing approximately $7-8 million. Around $4.5 million has been approved for the reconstruction of Woodring's center runway, and another $2.8 million has been approved for reconstruction of the south ramp and hangar, a new joint-use hangar and radar system.

There also is a $26 million project to update all the water piping on the base, Johnson said, with most of that infrastructure being in place since the 1940s.

Base officials also are trying to get more funding to pay bonuses to personnel who receive specialized training. More funding to pay these types of bonuses could keep people working at Vance, Johnson said, as opposed to elsewhere in the Interstate 35 aviation corridor.

Johnson has been at Vance since 2018, having served as 71st FTW vice commander until February 2021 when he became commander.

"No commander at Vance has been more involved in the Enid community than Col. Johnson. The partnership between Vance and Enid has never been stronger," Enid Mayor George Pankonin said.

Johnson said he was proud to represent all who are based at Vance, and said base personnel see first-hand what a strong relationship between the community and the base is supposed to be like.

"Our goal at Vance Air Force Base is to show what right looks like," Johnson said, "and that's both on base and off base. For many at Vance, it's their first real duty station. So from the very beginning, they get a look at what a relationship between the community and the base is supposed to look like."

The Flight Partnership Program is an example of what can be achieved with a strong relationship between the community and the base, Johnson said. The program helps groups of pilots be introduced to the Enid community by partnering them with non-military individuals, businesses and organizations. Each group consists of 25 pilots, he said, and it is encouraged that one event be held for the groups each quarter. The program can serve to further student pilots' professional development and strengthen the bond between Enid and Vance.