Man conned US military into buying $20M in fake uniforms and gear from China, feds say 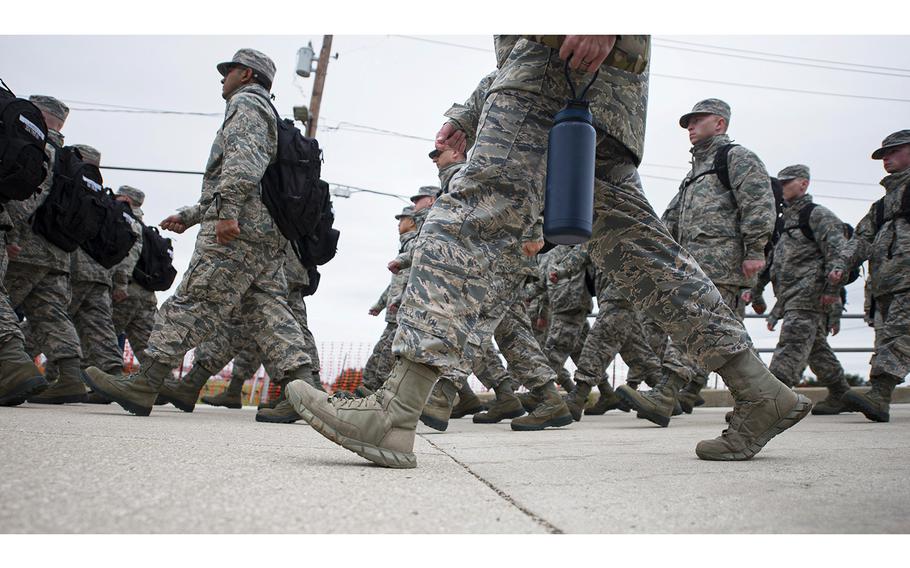 (Tribune News Service) —  The U.S. military was conned into buying $20 million worth of fake, unsafe uniforms and gear by a man who is now going to prison, prosecutors say.

Tens of thousands of fake jackets, flame-resistant hoods that weren’t actually flame-resistant and more pieces of military apparel were issued to U.S. Air Force bases worldwide to be worn by deployed Airmen, according to the Justice Department.

While the gear and uniforms were “passed off as genuine American-made products,” they were made in China and put the service members who wore them in danger, prosecutors say. Many of the products lacked safety features and were not up to U.S. military standards.

Now a judge has sentenced the leader of the conspiracy, Ramin Kohanbash, 52, a Brooklyn wholesaler, to three years and four months in prison, according to an Oct. 13 news release from the U.S. Attorney’s Office for the District of Rhode Island. He previously pleaded guilty to conspiracy to commit wire fraud and trafficking in counterfeit goods in 2019.

Kohanbash was also ordered to pay back $20 million he made in sales, the release says.

McClatchy News contacted Kohanbash’s attorney on Oct. 14 and was awaiting a response.

“American servicemen and women risk their lives every day in defense of the nation,” U.S. Attorney Zachary Cunha said in a statement. “But the risks they face should never come from the uniforms they wear, and the equipment they carry.”

Other victims of Kohanbash’s conspiracy to sell counterfeit military apparel include several businesses that make clothing and gear for military clients, prosecutors say.

One included a family-owned Rhode Island company that lost more than $639,000 after distributing fake military products that were initially distributed to the business by Kohanbash, according to the Justice Department.

In court documents submitted ahead of Kohanbash’s sentencing, his attorney wrote “the unfortunate and harmful events that led him to a guilty plea are very much at odds with the honorable man described by his wife, children, friends and business associates.”

From 2013 to 2018, Kohanbash had counterfeit military gear created in China and imported into the U.S., court documents state.

Among the fake gear given to the Air Force were at least 13,332 fake jackets detectable by enemies’ night vision goggles and 18,597 non-flame-resistant hoods, according to the release.

Kohanbash worked with at least two other men — Bernard Klein, 41, of Brooklyn and Terry Roe, 49, of Burlington, North Dakota — and sent samples of real U.S. military uniforms and gear to makers in China so they could mass-produce the apparel as accurately as possible, prosecutors say.

McClatchy News contacted attorneys representing Klein and Roe for comment on Oct. 14 and was awaiting a response.

Chinese manufacturers copied the real military products, as well as tags and trademarks, and re-created them before shipping the pieces out to Kohanbash’s warehouse in New Jersey where they would be stored, according to the Justice Department.

Kohanbash and Klein came up with a strategy to fool Chinese and U.S. customs, allowing the fake gear to enter the U.S., prosecutors say.

Then, the counterfeit garments would be sold to the U.S. military “and its suppliers, including a North Dakota supplier where Roe was employed,” the release states.

Under U.S. law, products sold to the military must be made in the country or another country that’s permitted to make them, according to the Justice Department.

“China is not one of those countries,” the release says.

In a letter submitted to court, Maj. Gen. Stacey T. Hawkins, the Air Force’s director of logistics, civil engineering, force protection and nuclear integration, wrote that he appreciates the court “recognizing the Air Force as a victim” and that he learned 30 different types of military gear given to the Air Force were fake.

Hawkins said thousands of these items failed “to protect deployed United States Airmen,” according to his letter.

“These Airmen are our Nation’s fathers, mothers, daughters, sons, brothers, sisters, wives and husbands,” Hawkins wrote. “They deserve better than to be put at risk due to Mr. Klein’s and Mr. Kohanbash’s greed.”

Klein was sentenced to one year and six months in prison in April 2021 and was ordered to pay a fine of $15,000 and restitution of $400,000, according to the release. Klein paid $348,000 as part of a civil settlement agreement related to the case.

Roe’s sentencing is scheduled for Oct. 20, according to the Justice Department. He pleaded guilty to conspiracy to commit wire fraud and traffic in counterfeit goods in February.

“For them, it was just business. But it was much more than that to their victims,” prosecutors wrote in a sentencing memorandum.