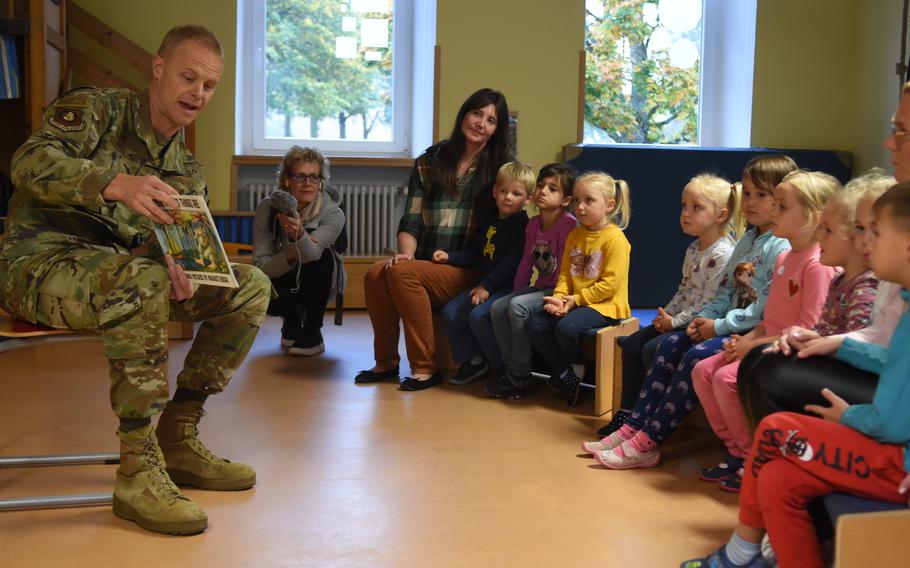 Maj. Gen. Derek France, 3rd Air Force and Kaiserslautern Military Community commander, reads “Where the Wild Things Are” to children at Villa Winzig kindergarten in Dansenberg, Germany, on Thursday, Oct. 13, 2022. The school participates in an early English learning program supported by the U.S. military and the state of Rheinland-Pfalz. (Jennifer H. Svan/Stars and Stripes)

A very young audience listened intently to Maj. Gen. Derek France read Maurice Sendak’s “Where the Wild Things Are,” the classic story about a boy named Max with a big imagination.

The children hear English each day as part of the Kindergarten Ambassadors project, which is supported by the U.S. military and the state of Rheinland-Pfalz.

The program needs American volunteers at three German kindergartens around Kaiserslautern, an area that includes tens of thousands of people affiliated with the U.S. military.

The only skill required is the ability to speak English. An ounce of patience might also help, since the job calls for spending time with preschoolers.

The program began at Villa Winzig, a small day care center in Dansenberg, for children 2 to 6. The school has had an English teacher on staff since 2009 and regularly hosts volunteer English speakers.

Ramstein Air Base sends two volunteers per month to read English stories to the kids for about an hour, a base official said. 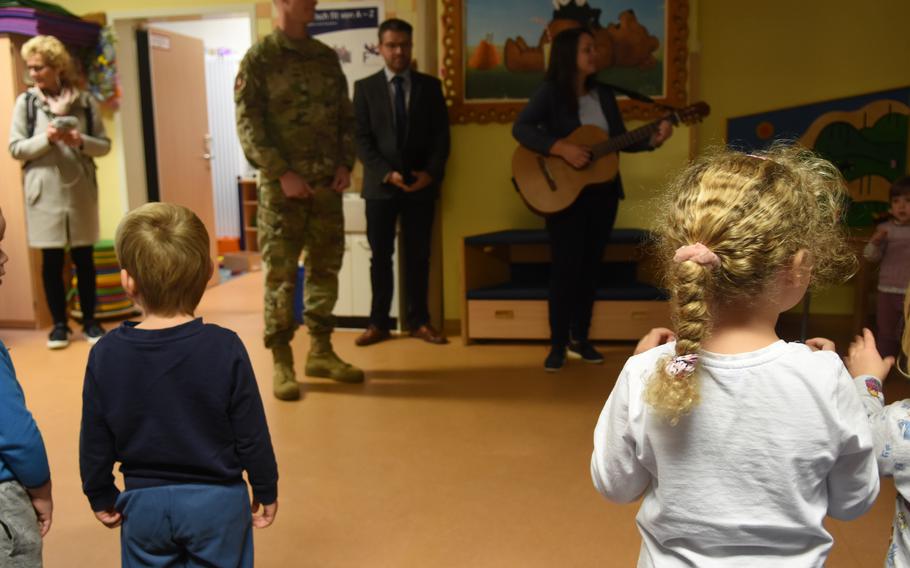 France told the school’s teachers he will encourage more airmen and soldiers to also volunteer.

“It was a great opportunity to read one of my favorite books,” France said Thursday, adding that it provided an example of how partnerships are built at a grassroots level.

Villa Winzig teachers told France the children are “like sponges” at this age, able to rapidly absorb many new English words.

This fall, the program expanded to kindergartens in Moelschbach and Hohenecken. Children there in just three weeks of being exposed to English are already repeating words like “apples, bananas and door,” said John Constance, who leads Welcome to Rheinland-Pfalz, a state program created to help integrate Americans into their German communities.

The goal is to extend the program throughout the region, he said Thursday, adding that English-speaking volunteers are needed “for as many hours as they can give.”

Constance said that since his Facebook post last month about the program, he’s heard from just over a dozen people.