YOKOTA AIR BASE, Japan – Airmen may have an easier time loading chaff and flare canisters for Air Force aircraft thanks to a device created by a former munitions inspector at this airlift hub in western Tokyo.

“I love seeing the progress the cradle is making,” he told Stars and Stripes by email September 28. “When I first came up with the idea, I thought I’d have to make the whole thing myself, but thankfully I had YokoWERX to really work hard in pushing the cradle forward.”

YokoWERX is an innovation lab at Yokota with a dedicated staff to help members of the base community solve technical problems.

The Hendy cradle stores chaff and flare cannisters that are used as defensive countermeasures to confuse or mislead enemy anti-aircraft missiles guided by radar or an aircraft heat signature. Henderson proposed his idea in November 2020, the design stage started December 2020 and the prototype was made in January 2021.

Now the Hendy is in the testing stage at YokoWERX. After years of working on the project, the team is hoping to have the device in use at Yokota by the end of the year and across the Air Force within the next two years, Tech Sgt. Nick Richards, a YokoWERX quality assurance inspector, told Stars and Stripes on Sept. 20.

Innovators and inventors can bring their ideas to YokoWERX where a team of Air Force and civilian volunteers can make them a reality, the wing’s innovation officer, said Master Sgt. Sarah Hubert.

“YokoWERX really is the area for you go to on base where innovation meets the Air Force that you may not be able to find at your regular work center because of restrictions,” she said Sept. 20. “We help remove some barriers and get your ideas not just at Yokota level of support, but also Air Force level support.”

Airman 1st Class Donald Manunta-Lowell, who loads aircraft with the flare and chaff countermeasures, is helping test the Hendy cradle by loading it on trucks, letting it rattle around and exposing it to working conditions.

After working with the Hendy firsthand, Manunta-Lowell said that ammunition loaders would benefit from its use. 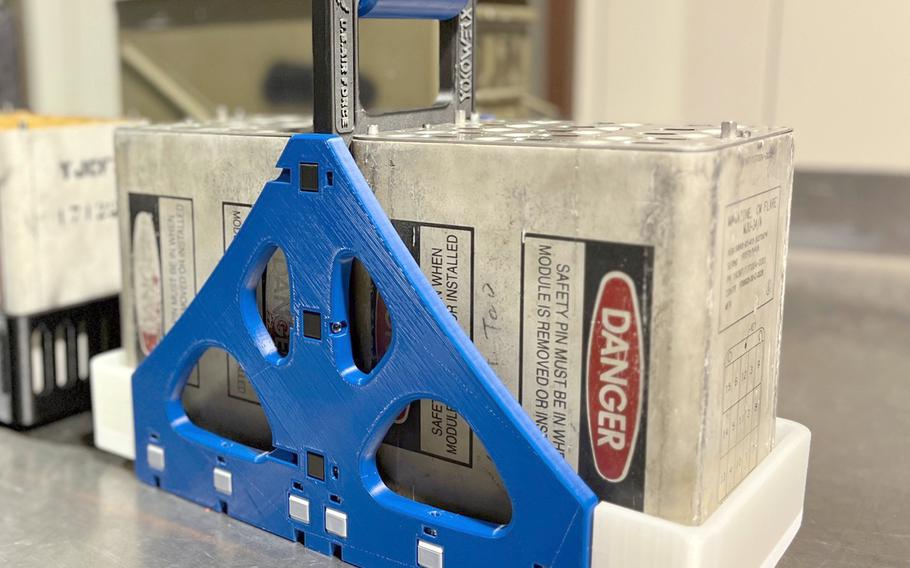 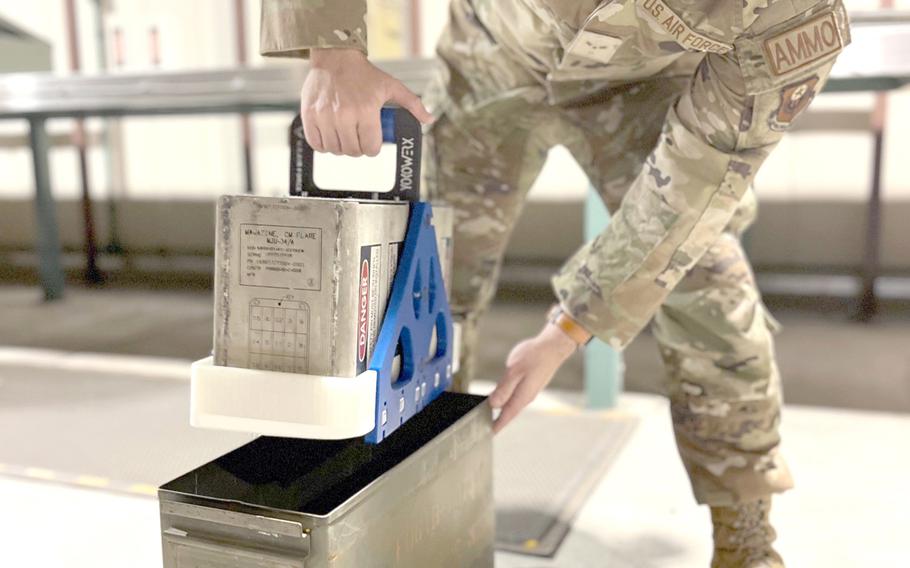 “I am somebody that would benefit from it, using it would make my work life easier, it would make it so we could do our job faster and safer,” he told Stars and Stripes on Sept. 20.

“I think everybody is looking forward to this,” Manunta-Lowell said. "Everybody gets here and deals with these cans in a regular way of getting it in and out and everybody thinks it's a bit of a hassle. So, this is a huge deal for everybody.”

YokoWERX trials discovered that loading canisters with the Hendy cradle took about 10 seconds, versus 44 seconds by the existing method.

The Hendy can carry at least 200 pounds of weight, Hubert said.

Richards said he is trying to create a version that costs $64 per unit to produce. Each Hendy cradle requires 50 to 60 hours to make on a 3D printer.

Instead of selling the idea to a contractor or company Richards says he wants to give the instructions on how to print the parts for the Hendy, so that innovation labs across the Air Force can make the cradle.

“I didn’t realize how much YokoWERX could help make the idea become a reality in the beginning,” Henderson said. “As soon as I explained my idea, everyone at YokoWERX worked together to make the cradle come to life exactly how I pictured it in my mind.”