Day care workers at Robins Air Force Base forced children to fight each other, feds say 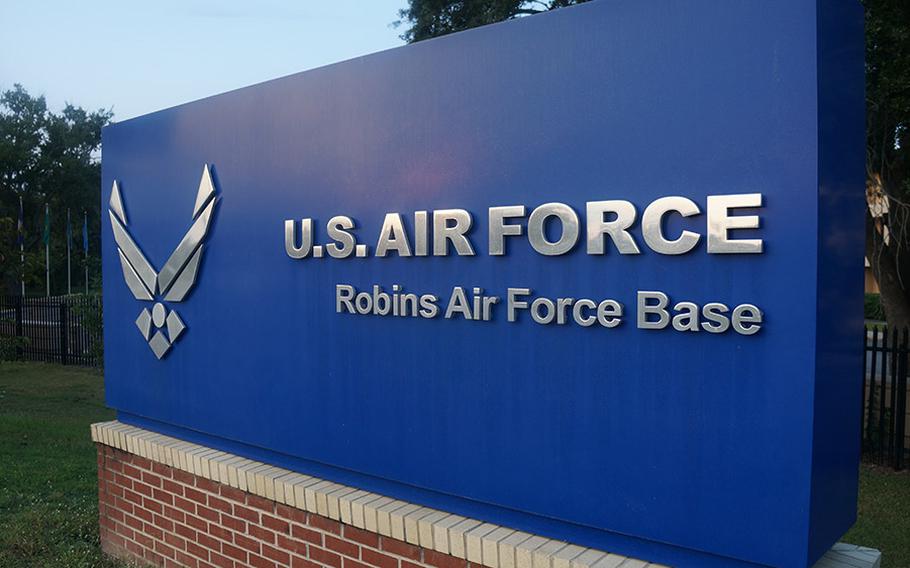 Two former day care workers forced children to fight each other on several occasions at a center at Robins Air Force Base in Georgia, and the facility’s former director kept quiet about the abuse, federal prosecutors say. (Edward Aspera/U.S. Air Force)

(Tribune News Service) — Two former day care workers forced children to fight each other on several occasions at a center at an Air Force base in Georgia, and the facility’s former director kept quiet about the abuse, federal prosecutors say.

While under the care of the three women, at least 14 children endured physical cruelty at the day care at Robins Air Force Base in Warner Robins, according to court documents.

Prosecutors say the events took place in January and February of 2021 and that this is an ongoing investigation.

Zhanay Flynn, 27, of Centerville, and Antanesha Fritz, 29, of Alabama are accused of hitting and kicking children, making them hit each other, spraying children in the face with cleaning solution and more while working at the day care, according to an Oct. 11 news release from the Justice Department.

The former director, Latona Lambert, 51, of Florida faces one count of failing to report suspected child abuse, according to the Justice Department.

Information about the women’s legal representation was not immediately available.

While the indictment does not specify the ages of the children subjected to abuse, Robins Air Force Base provides child care services to children up to 12 years old, according to its website.

The Air Force base said in a statement to McClatchy News that “properly caring for our Airmen and their families is of utmost importance.”

“Our Airmen should have confidence in the care provided at our Child Development Center,” the statement added. “We are fully supporting the ongoing investigation and reviewing processes to ensure the appropriate measures are in place to safeguard our children.”

During at least a dozen separate occasions, Flynn and Fritz caused pairs and groups of children to fight, hit and hurt each other in early 2021, the indictment states.

The two women were ultimately removed from the day care classroom and ended up resigning, the base told McClatchy News. Additionally, Lambert was removed from her position as director.

In some cases during the fights, Flynn and Fritz are accused of grabbing the hands of children involved, and physically forcing them to strike each other in the face, according to the indictment.

One child, specified as “Minor Victim 5,” was involved in several of the forced fights, investigators say. This child’s legs and wrists were “seized” by Flynn and Fritz, who had them kick and strike other children, according to the indictment.

On one occasion, Flynn and Fritz pushed a child to the ground, resulting in them hitting their face on a “hard item,” investigators say.

When the child cried as a result, they were forced into a “small enclosure” as punishment, the indictment says.

During a separate instance, this same child, specified as “Minor Victim 3,” was forced to fight another child before the women sprayed a cleaning liquid in their face, according to investigators.

Flynn and Fritz also sprayed other children in the head and face with a cleaning solution, the indictment says.

Other allegations of abuse include how Flynn and Fritz lifted a cot with a sleeping child on it, resulting in the child falling to the ground, the release states. They’re also accused of shaking a child while threatening to hit them, kicking a child, stepping on a child’s leg, hitting a child in the head with a book and more, prosecutors say.

“Parents and guardians of children who were under the care of the defendants and have concerns about their child are encouraged to contact the Robins Air Force Base Family Advocacy Program at 478-327-8398 during regular business hours,” the release states.

If convicted, Flynn and Fritz face years in prison for the varying counts against them, according to the release. Lambert faces a maximum of one year in prison if convicted on the count of failing to report suspected child abuse, prosecutors say.

The U.S. Attorney’s Office for the Middle District of Georgia is involved in the case’s prosecution. The allegations of abuse are being investigated by the Air Force Office of Special Investigations and Air Force Security Forces alongside the FBI, the release says.

Robins Air Force Base is about 20 miles south of Macon.