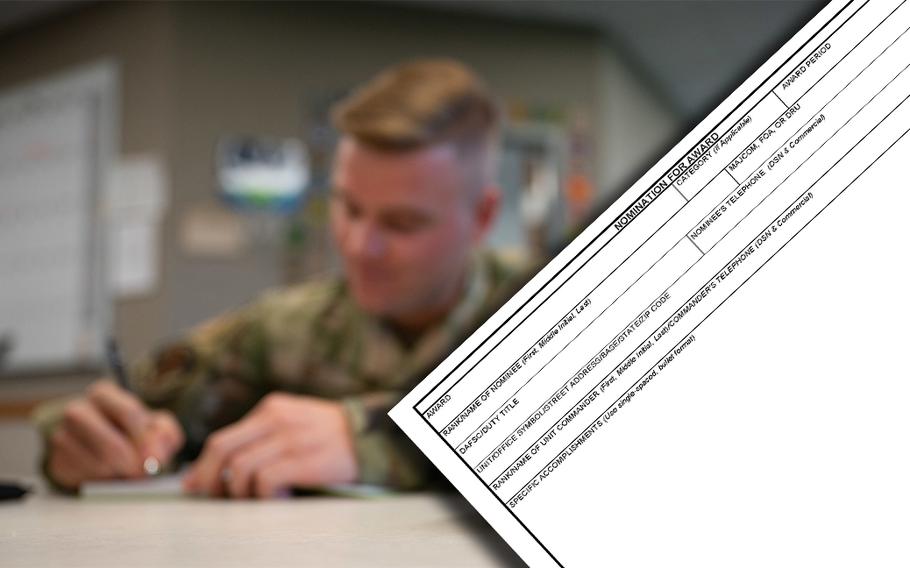 Airmen will need to brush up on their sparkling prose this fall.

The Air Force announced Thursday that it is doing away with bullet points for its airman award submissions in favor of short narratives, effective immediately.

The new submissions, dubbed performance statements, should “consist of plain-language words, (be) efficient, increase clarity and improve the ability to understand an airman’s performance correctly and equitably,” the Air Force said in a short guidance update.

Airmen also are being told to avoid uncommon acronyms and abbreviations, which is effectively asking them to shed years of institutional conditioning.

In the legacy bullet format, each statement included an action followed by impact, results and outcome of the action taken, all packaged within a line of less than 8 inches of text.

In another change, blank space will no longer be considered a potential commendation killer.

Air Force Personnel Center guidance now says that white space in the submission form’s right margin is expected. It’s a move away from an unwritten requirement that asked airmen to fill spaces with each bullet line to avoid the impression they didn’t have enough good things to say.

Some said they worry that a quick shift to narrative formats without training could lead to more confusion from airmen, who are already struggling with a shift to new web-based online tools that include MyEducation, MyFitness and MyEval.

Others welcomed the switch to theoretically plainer English.

“I think people overestimate how much change the narrative format is going to be,” Reddit user Pretermeter wrote. “Only difference is you have to add in words to make complete sentences like ‘and, the, to’. Be prepared to be underwhelmed by the amount of change this is bringing.”

Next year, the change to narrative writing continues with officer and enlisted performance reports.