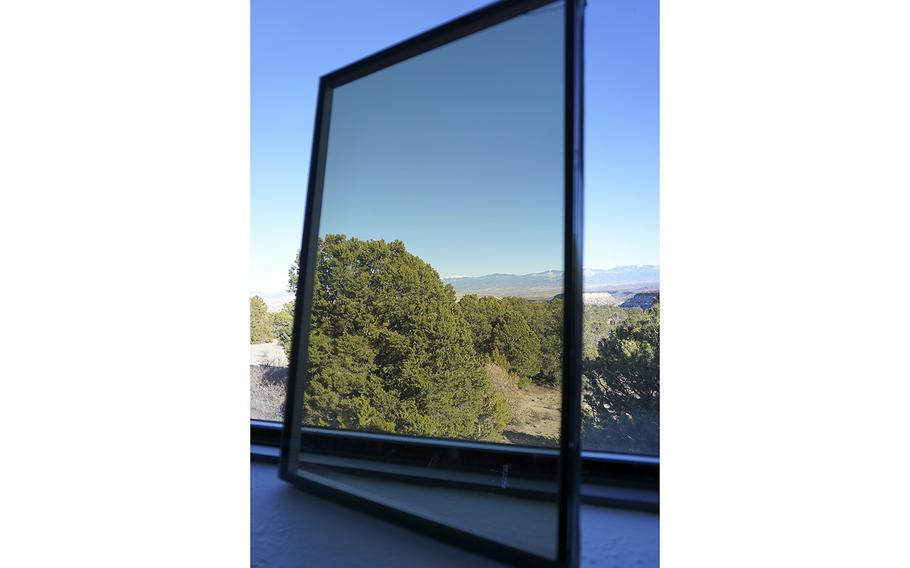 The Small Business Innovation Research, or SBIR, grant will allow UbiQD Inc. to install a dozen quantum-dot-based solar windows on one Ellsworth building, plus another dozen on UbiQD’s own headquarters in Los Alamos, to test and optimize the technology before considering further deployment.

“It’s a phased approach with initial deployment for research and development to first measure and upgrade performance,” UbiQD founder and CEO Hunter McDaniel told the Journal. “If successful, we could then move to fully roll it out at Ellsworth, and potentially at multiple Air Force bases with follow-on funding from more SBIR grants and other programs.”

The Air Force contract could significantly accelerate UbiQD’s march to market for its solar window, or “WENDOW,” technology, which the company began developing in 2014 using advancements in quantum dots originally developed at Los Alamos National Laboratory.

Quantum dots are microscopic, three-dimensional structures that measure about 10,000 times smaller than a human hair. The nanoscale particles manipulate light in unique ways, absorbing it and emitting it back out in specific colors.

They’re used today in everything from transistors and sunscreen to LCD televisions, tablets and smartphones. But traditionally, they’ve been extremely expensive to make, and they’re usually composed of toxic materials.

In contrast, UbiQD’s product is made through an alternative, inexpensive process that uses low-cost and nontoxic elements, paving the way for new market applications, such as the solar-generating WENDOWs, which are imbedded with quantum dots. The dots absorb solar energy, or photons, which are then channeled to solar cells attached to window frames.

The company has already deployed the window technology in various pilot projects, including the Holiday Inn Express in Los Alamos, and at the National Renewable Energy Laboratory in Colorado.

And, in July, it installed the first half dozen WENDOWs of a 36-window installation at Western Washington University’s campus art gallery, where the university plans to power up things like art exhibits, while also offering clean-energy learning opportunities for students.

“This technology helps Western Washington University get closer to achieving our sustainability goals,” Vice Provost for Research and Graduate School Dean David Patrick said in a statement. “I was impressed by how easily the windows were installed, and love how great they look. I’m hoping to see more projects like this on campus in the near future.”

The university installation, and UbiQD’s other pilot projects, are aimed at powering up specific things like art exhibits, or automated window shades that open and close independently, saving energy by shading a room in summertime or opening the blinds in winter for additional heat.

The Air Force installation, however, is aimed at powering up buildings, which is UbiQD’s ultimate goal for commercial deployment.

UbiQD spoke with Air Force personnel around the country under an initial, $50,000 SBIR grant to promote its technology, leading to the phase II, $750,000 grant for installation at Ellsworth.

“Our technology resonated with civil engineers working on base resiliency around the country to reinforce energy reliability at aging military facilities,” McDaniel said. “Apart from Ellsworth, we have letters of support from three other bases.”

When fully installed, the solar windows likely won’t fully power a building, but rather, offset other generating sources. That’s because, unlike traditional solar panels — which generally can convert between 15% and 18% of the solar energy they absorb into electricity — the WENDOW technology is currently only converting about 5%, McDaniel said.

Optimization efforts, such as strategic window locations to maximize light absorption, is expected to raise performance over time.

Meanwhile, the company is making significant headway in other markets for its quantum dots, including solar panels for greenhouses, which produce electricity to run operations while simultaneously emitting red and orange light that can significantly increase crop yields.

To date, UbiQD has raised about $15 million in private equity and grant funding. It currently employs 26 people, including 24 full-time in Los Alamos.

Visit the Albuquerque Journal at www.abqjournal.com