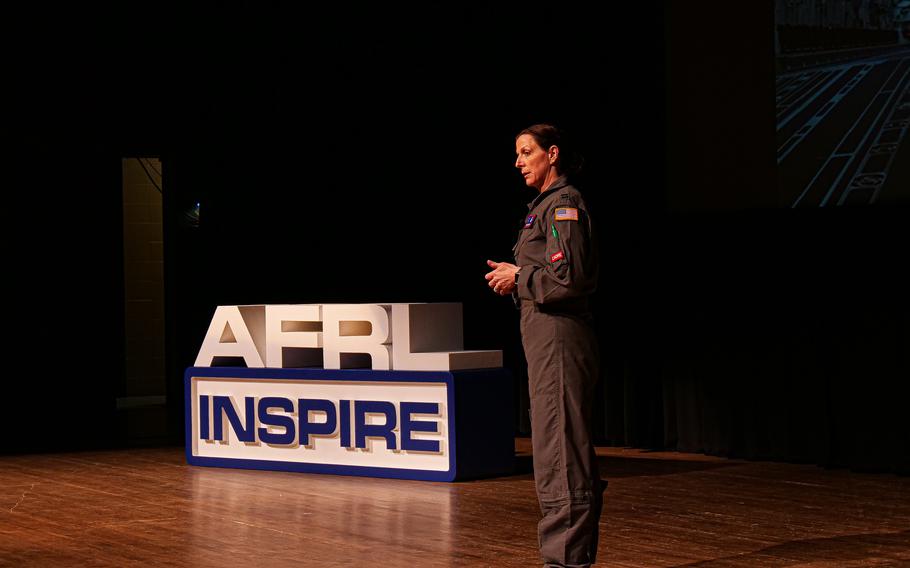 "AFRL Inspire 2022″ drew viewers virtually with a small in-person gathering at Wright-Patterson Air Force Base to hear nine speakers. (The event can be watched on AFRL's You Tube channel at https://www.youtube.com/c/AFResearchLab.)

It's AFRL's sixth such event, and this year's series of TED talk-style presentations draws heavily on the 75th anniversary of the Air Force, on Sept. 18.

"The Air Force has developed some of humankind's most innovative technologies," Raspa said.

Kerianne Hobbs, an AFRL aerospace engineer, talked about the latest AFRL work on machine autonomy, a field the lab has studied for some 30 years.

Space is getting crowded with satellites and debris, Hobbs said. As a result, we are soon approaching a point where pilots will not be able to control their spacecraft 100% of the time.

That may be where artificial intelligence, refined by AFRL experts, comes in. But letting AI control a spacecraft in orbit is complex, Hobbs cautioned. A mistake involving AI on an spacecraft could result in a loss of billions of dollars, or debris hurtling toward Earth, in a worst-case scenario.

"If we're going to put AI in space, we have to ensure that AI is safe," Hobbs said.

The solution involves "training" AI with "re-enforcement learning," with the hope that a spacecraft can be "taught" to dock safely and efficiently, without over-penalizing an AI system to avoid docking altogether. "The difference between docking and crashing is velocity," she said. "It's a fine line."

"Together, humans and AI can explore further than we can on our own," she added.

Melissa Wilson, an AFRL nurse scientist, is exploring ways to ease distress among military health care providers. She described the stresses of caring for patients on a dark cargo plane flying at night.

"In the midst of chaos like this, our military health care providers make frequent life-and-death decisions," he said.

Wilson's goal is to intervene early to prevent these stresses from affecting the military's health care mission. And her findings can be tailored to police officers and social workers, too.

AFRL has a workforce of more than 11,500 people across 40 global operations.