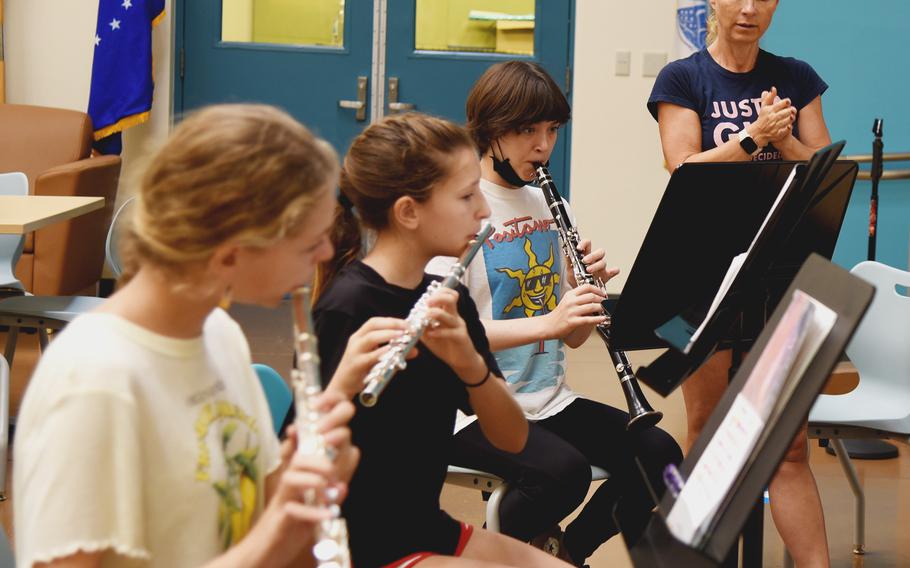 Get ready to kick out the jams — The Panthers are marching again at Yokota High School.

While their classmates enjoyed the waning days of summer vacation, members of the revamped Panther Marching Band at Yokota Air Base assembled for practice Aug. 8 to 13 in the sweltering heat of western Tokyo.

“I don’t mind,” Yokota High senior Cade Kirkpatrick told Stars and Stripes the first day of band practice on the high school basketball court. “I am a band kid.”

Several decades have passed since a marching band last took the field at Yokota, the Air Force airlift hub in Tokyo, in 1979, music teacher Jenny Gaume, 54, told Stars and Stripes.  Putting a marching band requires money, and a cadre of drum and drill instructors, which can be hard to come by, she said. The Panther Marching Band performs "I Got a Feeling," by the Black Eyed Peas, at Yokota High School at Yokota Air Base, Japan, Aug. 13, 2022. (Kelly Agee/Stars and Stripes)

Kirkpatrick, a native of Pittsburgh, is the band president and plays trombone, an instrument he has been playing for three years.

“I love performing,” Kirkpatrick said. “I like any chance that I have to perform music. And this is a new avenue of performing that I’ve never done before and I’m excited to try it out.”

Gaume, a native of Alton, Ill., also revived the marching band based on students’ interest. She served in the Army band from 1988 to 1992.

“Marching band provides an experience for the kids to be a part of a team,” Gaume said to Stars and Stripes on Aug. 3. “It’s a great way for kids to work together and for everyone to put together a beautiful product and share it with the public.” 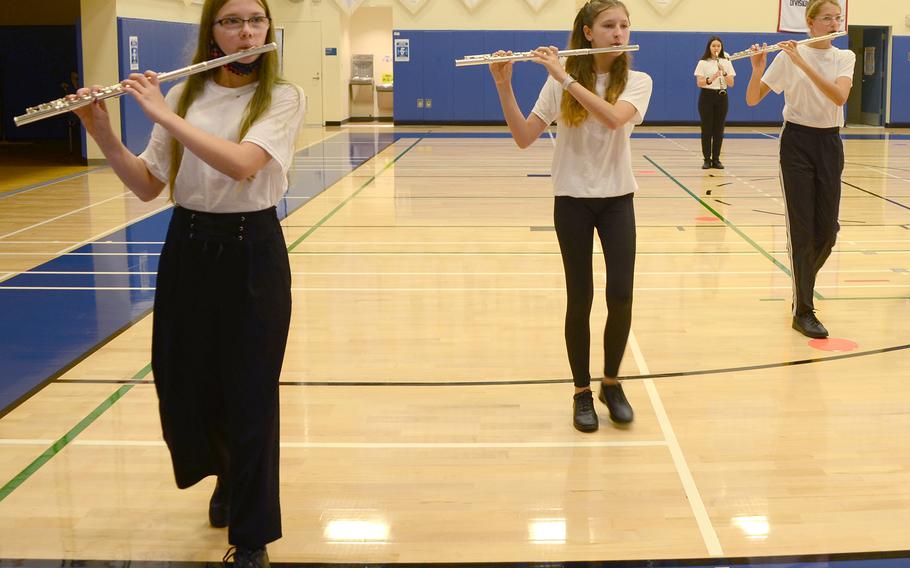 The Panther Marching Band perform "I Got a Feeling," by the Black Eyed Peas at Yokota High School at Yokota Air Base, Japan, Aug. 13, 2022. (Kelly Agee/Stars and Stripes)

A marching band is ideally made up of 40 people, but Gaume started with just 25.

The band learned “Just Dance” by Lady Gaga, “Cupid Shuffle” by Cupid and “Mic Drop” by BTS. The band members also learned to simultaneously march and play “I Got a Feeling” by the Black Eyed Peas.

Band volunteer Audra Kirkpatrick, 40, a middle school teacher in special education and no relation to Cade, helped teach the band marching techniques. A self-described “clarinerd,” Kirkpatrick, a native of Alexander City, Ala., said she grew up as a band kid and took part in middle and high school.

“When Ms. Gaume posted that there was a marching band starting up, I know that I have these skills to help, I was really excited,” Kirkpatrick said.

The band started marching in place while miming their instruments, while a metronome kept time through a large-screen TV. Then they learned to marching forward, backward and side to side, using the correct foot techniques. Finally, they picked up their instruments and put it all together.

Jadon Pierce, a high school sophomore, 15, took on the role of drum major and taught the band to march.

Pierce, of Seattle, was in the Wildcat band at Clear Creek High School, in Houston, before he came to Japan.

“I needed to share my experience with this new marching band.” Pierce said Aug. 8. “We only have a few days. So, being able to teach the drill can be difficult because we only have a limited amount of time of us to learn the drill.” On Aug. 13, the band assembled to show their stuff. Pouring rain moved the show from the football field indoors to the basketball court, where the Panthers marched to the Black Eyed Peas while their parents provided the audience. A cookout followed.

The band performed well for the amount of time it had to practice, Pierce said. “It has helped people grow here, because when we performed, we became a team.”

The band has four more performances at home-game halftime events, starting Sept. 9 and including homecoming Oct. 22.

Audra Kirkpatrick said the most rewarding thing about volunteering with the band was watching the individual musicians gel as a marching team.

“It is amazing, watching the kids take it from not even ever heard of a marching band to putting an entire song on the field in just five days,” she said. “There are always a couple that struggle so you have to find a way to help correct them where they are not wanting to quit.”

This story has been corrected to reflect a change in the history of the band at Yokota High School.