An Air Force base west of Dallas let the robotic dogs out to patrol the installation this month, the second base in two years to give the machines a try.

The security forces squadron at Dyess Air Force Base unleashed an unspecified number of robot dogs – officially designated Vision 60 Quadrupedal Unmanned Ground Vehicles by their manufacturer – on Aug. 5 for a trial and training phase, according to a 7th Bomb Wing news release.

These quadrupeds, unlike their organic counterparts, neither bark nor bite and are limited to a watchdog role, according to the Air Force.

The machines are expected to “provide early warning” of potential threats, said Staff Sgt. Trung Vu, noncommissioned officer in charge of sensors for the 7th Security Forces Squadron, who was quoted in the release. Dyess is home to two aircraft wings of B1-B Lancer bombers and C-130J airlifters.

Each Vision 60, a product of Ghost Robotics of Philadelphia, starts at $150,000, and the price goes up as payloads are added, company spokesman Michael Subhan told Stars and Stripes by email Wednesday. The robotic dog is capable of nearly 7 mph with a range of six miles and three hours of battery life, according to the Ghost Robotics website.

“There are quite a few payloads that can be added to the Vision 60 robot,” Subhan said. 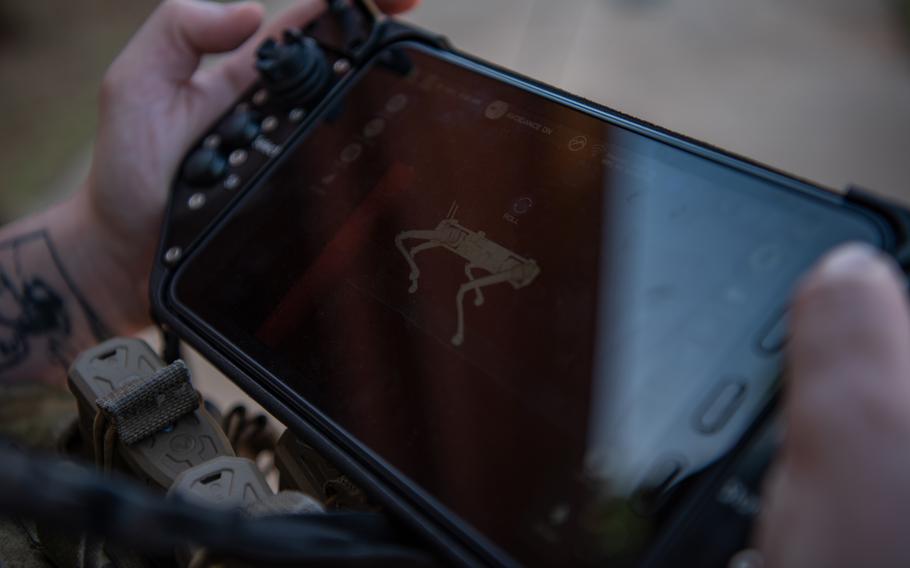 Dyess is the second Air Force base to field mechanical quadrupeds. Tyndall Air Force Base, Fla., set their robot dogs on the hunt two years ago.

The robots will not replace real working dogs, but “will be used as a force multiplier for enhanced situational awareness,” Maj. Jordan Criss, commander of 325th Security Forces Squadron, said in a news release in November 2020.

The robots’ patrol paths are set and monitored by a noncommissioned officer in charge of the security sensor system, Criss said. The machines can transmit real-time data to their operators and be controlled from a handheld remote or laptop.

U.S. Customs and Border Protection also tested Ghost Robotics’ machines as potential patrol partners along the U.S. Southwest border, according to a Department of Homeland news release in February.

The 100-pound robot dog is engineered to traverse a variety of natural terrain and human-built environments like stairs, according to Homeland Security. Robot dogs can get themselves upright again if they fall or are knocked over. Putting them to work reduces the risk to human officers from harsh environments, extreme weather and traffickers in drugs and humans, according to the department.

The Border Patrol tested its autonomous quadrupeds as sentries by programming them to walk specified routes during day and night. The machines also simulated train car inspections at railyards, according to Homeland Security.

“The Vision 60 can run autonomously via either GPS waypoints or recording a route and playing that route back autonomously,” Subhan told Stars and Stripes.