SIOUX CITY, Iowa (Tribune News Service) — The timing couldn't have been much better.

Twenty-nine years and one day after she first enlisted with the U.S. armed forces, Col. Sonya Morrison obtained the highest rank of her career on Saturday when she was officially installed as the first female commander of the Iowa Air National Guard's 185th Air Refueling Wing in Sioux City.

At the ceremony, which began at noon in the base's fuel cell hangar, Morrison participated in the change of command with outgoing leader Col. Mark Muckey, a Sioux City native who occupied the post for more than three years and has served for 38 years in total.

Just after 12:30 p.m., Morrison finally got to speak as the 15th commander of the Air Refueling Wing.

"I will always strive to be the best commander I'm capable of being to you," Morrison told the crowd of more than 200 service members.

In taking over a unit that's won more than a dozen Air Force Outstanding Unit Awards for exceptionally meritorious service, Morrison will work to further the 185th's main mission of mid-air refueling and moving people and equipment around the world. 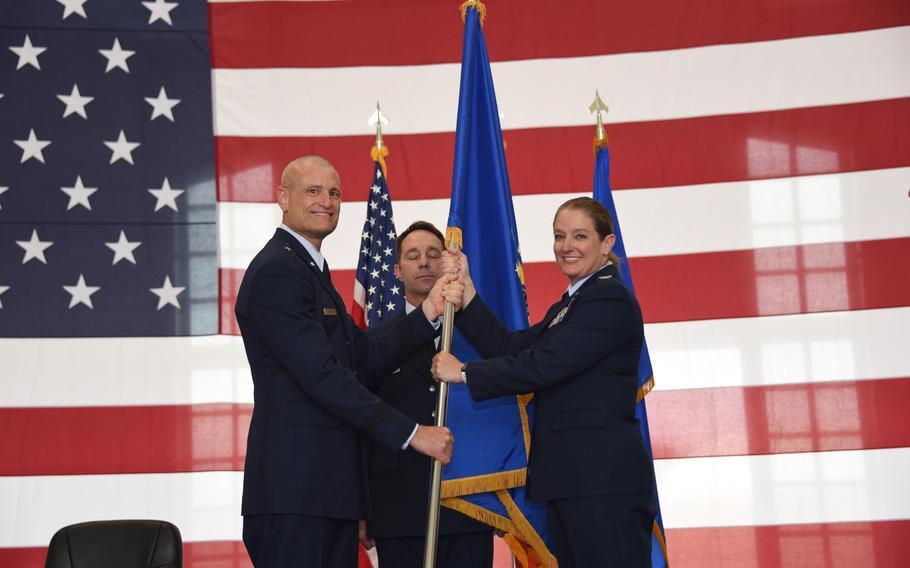 To get to the point of commanding the 185th Air Refueling Wing, Morrison, an Osceola, Iowa, native and University of Northern Iowa graduate, previously served as the vice wing commander of the 185th where she helped prepare almost 1,000 airmen for the possibility of mobilization during state and federal operations.

Prior to her leadership roles with the Air Refueling Wing, Morrison trained as a helicopter pilot with the Iowa Army National Guard and then logged hours as an F-16 fighter pilot with the 132nd Fighter Wing out of Des Moines.

While speaking, Morrison touched on her varied history with the armed forces and on the historical nature of her installation as the first female wing commander of the 185th but didn't spend a great deal of time expounding on either point.

"Sometimes being first at something has a lot to do with timing," Morrison said.

When she was named the new commander on April 28, Morrison struck a humble tone then, too. "I just look at it as I do my job and do what I need to do and serve the Air Force," she said.

Muckey, who spoke before Morrison, was effusive in his praise of her ability to "draw one hell of a crowd" and admired her great potential as a leader.

"I know you have the right commander at the right time," said Muckey, who was away from Sioux City for 30 years before returning to assume command of the 185th.

After the pageantry of the day ended, Muckey added to his admiration of Morrison: "She has a uniquely diverse background," he said. "She comes uniquely suited with both her leadership skills and her background to really take the wings here."

Even though Morrison knew for months she would be taking over for Muckey, she confessed to being a bit in awe of the change of command ceremony once it got going. But she still kept her focus on the mission ahead.

"Some of it is a little overwhelming but just really a lot of excitement … after working for so many years and learning from others and trying to take all of that to do a better job and continue to improve upon things that I've learned from previous commanders."