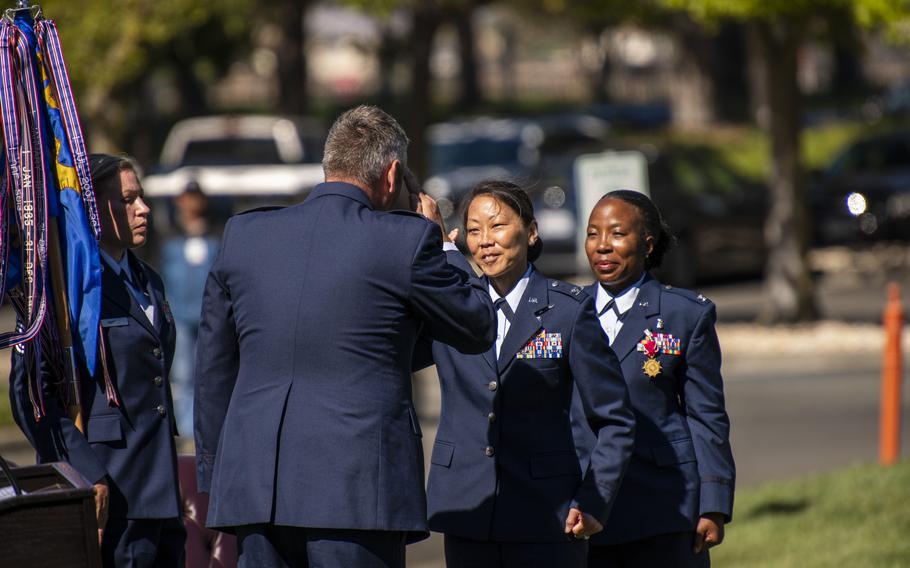 Col. Melissa Dooley assumed command of the 60th Medical Group and the Sacramento Directorship, replacing Col. Gwendolyn Foster at what is considered the flagship of Air Force's Medical Service.

In his remarks welcoming Dooley, Dr. Brian C. Lein, the assistant director for Health Care Administration at the Defense Health Agency, noted the " Sacramento market team' provides medical services not only to active-duty airmen but also to some 276,000 beneficiaries, including family members and retirees in the greater Sacramento and Northern California areas.

Speaking at the ceremony, Col. Corey A. Simmons, commander of the 60th Air Mobility Wing until July 27, said, "Being the Med Group commander is no easy task, and having an incredible support network like Gwen's is very important."

Simmons said DGMC is staffed by some 2,500 personnel and boasts 60 specialty clinics. The hospital also includes the Department of Defense's largest Department of Veterans Affairs joint venture program that provides over $25 million in care.

Dooley earned a bachelor of science degree in physiology/neurobiology from the University of Maryland and also graduated from the Uniformed Services University of the Health and Sciences in 2005. She was commissioned into the Medical Corps and trained in emergency medicine in San Antonio.

Lein advised that Foster, who was awarded the Legion of Merit during the ceremony, "helped drive the local response to COVID-19" and contributed during the last two years to supporting the military's efforts around the world.

Speaking to Foster, Dooley said, "Like you and your family, my family and I will give our all to lead this team of professionals and serve this community with pride as we work to continue building on the trust you have established over the past two years."

Dooley later addressed those under her new command.

"Finally and most importantly, to the professional medics of the 60th Medical Group, I am honored and humbled to have the privilege of serving as your commander," she told them.