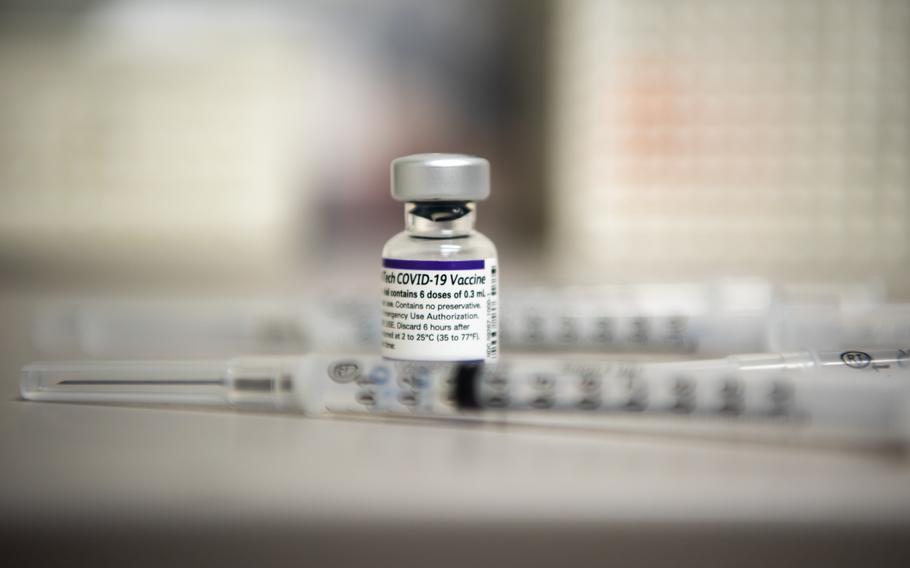 Syringes surround a vial of the COVID-19 vaccine before being administered at the Kadena Immunization Clinic at Kadena Air Base, Japan, Jan. 26, 2022. (Anna Nolte/U.S. Air Force)

The ruling affects 80 to 100 Airmen serving or having served at Wright-Patterson Air Force Base.

The federal court in Cincinnati also entered a nationwide temporary restraining order that prevents the Air Force from enacting disciplinary consequences for refusing the mandate when a request for a religious exemption is at issue.

The order is valid for 14 days, while the court weighs a request for a preliminary injunction, which would protect Airmen with religious objections until a trial.

The order was issued in the case Doster v. Kendall.

“We were pleased by the ruling,” Kentucky attorney Christopher Wiest, who represents the plaintiffs in the case, told the Dayton Daily News on Thursday evening.

“My co-counsel at Siri Glimstad and I were fielding hundreds of calls a week from Air (Force) and Space Force members who were facing imminent punitive actions and in some cases the end of long careers, and the order came in the nick of time,” Wiest said. “Today’s ruling makes clear that Congress’ directive to all federal authorities in the Religious Freedom Restoration Act means something: the Air Force cannot grant hundreds of administrative and medical exemptions and treat religious exemptions in a second-class status.”

“This is a huge victory for our country and religious freedom,” Stephen Crampton, Thomas More Society senior counsel, said in a statement sent to this news outlet. Crampton is one of the attorneys representing plaintiffs in the case. The Thomas More Society is a national not-for-profit law firm.

Reached Friday morning, a spokeswoman for the Department of the Air Force said the department will comply with the court order.

Air Force leaders have argued that vaccination is an important component of fitness and military readiness. In an unsigned order in April, the Supreme Court ruled that the military could take disciplinary action against an Air Force Reserve lieutenant colonel who refused the COVID shot for religious reasons.

A December 2021 memo from the Air Force directs commanders to take “appropriate administrative and disciplinary actions consistent with federal law and Department of the Air Force ... policy in addressing service members who refuse to obey a lawful order to receive the COVID-19 vaccine and do not have a pending separation or retirement, or medical, religious or administrative exemption.”

Refusal to comply with the vaccination mandate could result in discharge from the service, Air Force Secretary Frank Kendall and others have said.