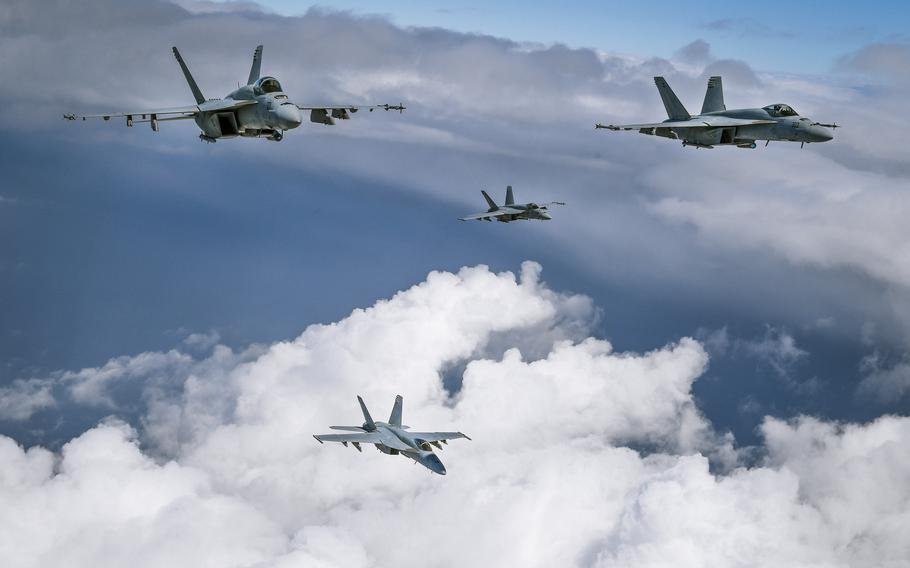 (Tribune News Service) — Hornets and Eagles will battle for control of the skies over Oregon the next two weeks.

The "dissimilar air combat training" exercises began Monday and will run through Friday before taking a weekend break and resuming July 18.

The previously scheduled training comes amid heightened tensions over the Russian invasion of Ukraine. In coordination with allies in NATO, the Air Force and Navy jets are among the military options to respond to an expansion of the conflict into neighboring countries or simultaneous incidents in Asia.

The Oregon training is meant to train pilots from different branches of the U.S. military on how to work together in a combat situation. The simulations also underscore how pilots would both fight with and against aircraft with different capabilities and pilots with different training.

VFA-192, nicknamed "Golden Dragons," is one of the West Coast squadrons assigned to five nuclear-powered aircraft carriers, each of which can carry more than 64 planes and helicopters.

The squadron was most recently attached to the Nimitz-class carrier USS Carl Vinson, homeported in San Diego.

When not at sea, the squadrons are based at Naval Air Station Lemoore in central California. Straddling portions of Kings and Fresno counties, it is the Navy's largest Master Jet base in the world.

The Navy and Marine Corps are the only branches to fly variants of the F/A-18E Super Hornet, a two-seat version of the original single-seat Hornet, which entered service in 1978.

The Air National Guard squadron, nicknamed "Redhawks," flies F-15Cs whose primary role is to knock out enemy aircraft to establish "air superiority" over a battlefield on land or at sea.

The Air Force is the only branch of the American military that flies the F-15C. The 123rd Fighter Squadron is part of the Oregon National Guard's 142nd Wing, a reserve component of the Air Force.

Lt. Col. Joshua Hovanas, the 123rd Fighter Squadron commander, said in a statement that the training provides realistic combat scenarios for pilots to hone advanced aerial tactics that may be used against potential adversaries.

"This training with the Golden Dragons is a unique opportunity for the Redhawks to refine and reinforce joint air-superiority tactics," Hovanas said.

The squadrons will take off and land from the Portland Air National Guard base at Portland International Airport. The jets will fly out over the Pacific Ocean for the actual high-speed maneuvering. Other sessions would be over designated airspace in Eastern Oregon.

To avoid noise disruption in the Portland area, the aircraft will wait until after 8 a.m. to launch and return by 4 p.m.

The Air National Guard F-15C Eagle would also be used to intercept enemy bombers approaching a target. It has a top speed of mach 2.5 — 2 1/2 times the speed of sound, or just under 1,900 mph.

The F/A-18 Hornet have been used in combat to support ground attacks and make bomb or missile strikes against troops or other targets. It also was used to shoot down Russian-built MiG aircraft flown by enemy forces. The Hornet has a top speed of mach 1.6, just over one-and-one-half times the speed of sound, or nearly 1,200 mph.

The 142nd Wing is slated to be the first American squadron — active duty or reserve — to receive the new F-15EX model. The jets have significantly upgraded avionics and materials compared to the original F-15s that entered service with the Air Force in 1974.