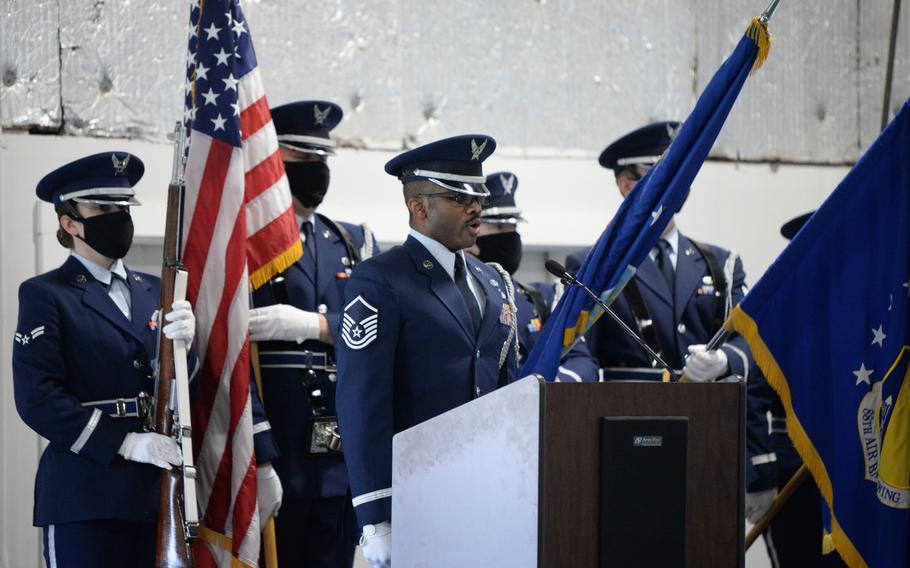 (Tribune News Service) — More than a decade ago, Joshua Lane was a young non-commissioned officer with no interest in serving in an Air Force honor guard.

An assignment at a military funeral in Arizona changed his life.

Then in his mid-20s, Lane found himself handing a U.S. flag to an orphaned child at his parents' military funeral. Both of the 10-year-old child's parents had been lost in the line of duty while serving in Afghanistan.

"It clicked," Lane recalled of that moment. "This is why I do this. This is why this is so important. This is not only closure for a chapter of a military member's life, but also for their family."

That experience led Lane to where he is today, the NCO in charge of the Air Force's busiest and most wide-ranging honor guard at Wright-Patterson Air Force Base.

A member of a military honor guard unit may be the first — and final — uniformed military member a civilian may encounter.

"I've been face to face with a crying widow," Lane said. "And it's my job to be strong."

They represent the military to civilians who may be enjoying a July 4th parade — or experiencing the most painful moments of their lives.

Staff Sgt. Rodney Petrie, a member of the Wright-Patterson unit, said it can be challenging bringing new members up to speed on just what it is an honor guard does and why that matters.

"Whenever they actually go out in the field and perform a ceremony, it's kind of like on-the-job training — it all comes together," Petrie said. "You see the impact it has on the family. That brings it all together for them. They all get locked in."

The Wright-Patterson honor guard unit ended 2021 with more than a million miles traveled, a new milestone in the Air Force, having served some 4,300 funerals and more than 160 color postings.

On a typical day, the base honor guard will be responsible for 10 or more ceremonies; a normal week will see 50 to 60 ceremonies, but in the past two quarters, that weekly allotment of ceremonies has sometimes reached 111, Lane said.

It takes 33 active-duty members and six National Guard and Reserve members to cover that wide expanse. The unit solicits uniformed volunteers on the active-duty side from 17 Wright-Patterson organizations. Volunteers, supported by a staff of 10 full-time staff members, serve six months.

Before they perform, they undergo more than 50 hours of training, mastering some 125 tasks.

"This is a very high-performance job," Lane said. "Very high-viz (visibility) as well. So we do make sure our individuals are well versed in their craft and to hone that craft."

"We spend a lot of time training," he added. "That is our bread and butter."

And if they don't have enough volunteers?

Thankfully, regional Guard and Reserve members augment the unit, Lane said. But there are times when some members are, as Lane put it, "volun-told" to volunteer. And full-time staff members will step in when necessary.

"The Honor Guard is a 'no-fail' mission, especially at Wright-Patterson," Lane said.