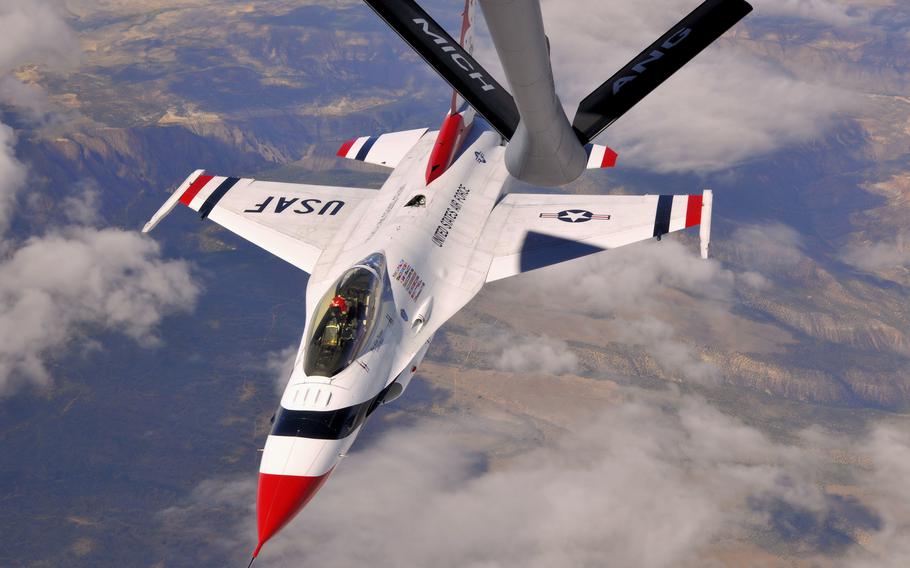 SELFRIDGE ANGB, Mich. (Tribune News Service) — It was a beautiful day for flying and the blue sky over Selfridge Air National Guard (SANG) Base on Wednesday was streaked with silver A-10 Thunderbolts.

"There's your fly by," said Maj. Mark Vaught, standing outside the gate in Harrison Township, as two fighter planes suddenly appeared on the horizon.

Vaught is a pilot too.

He flies the heavies as big military planes like the KC-135 Stratotanker is known. On this day, however, he was on the ground promoting the 2022 Selfridge Open House and Air Show set for July 9-10.

"I got the big show," said the airshow director, who has been flying since he was a kid.

As a teenager growing up on the West Side of Detroit, he was given the opportunity to experience flying with a veteran pilot, Lt. Ralph Mason. He took to flying immediately but what really inspired Vaught's passion for aviation was Mason, who served in the military and as a mentor to young people.

After being deferred from the draft due to his work for a company that designs parts for airplanes, Mason enlisted voluntarily and the following spring attended the Tuskegee Airmen, Class 45 fighter pilots training. He earned the rank of Second Lieutenant Fighter Pilot. He was trained on the AT-6, P-47N, Twin Engine, B-25 and Advanced, single engine. After the war he remained involved with the Tuskegee Airmen Detroit Chapter, until his health would no longer permit it. He died in 2013, leaving behind a legacy of young pilots following his lead.

"I was able to stand on the shoulders of giants as a 16-year-old," said Vaught, who has been assigned to direct this year's show.

"It's been five years since the public has been out to the base for an air show. We had to cancel the air shows (due to the pandemic) but SANG has not slowed down," Vaught said. "It's going to be great to have people back to see what their hometown's military are doing. Every branch of the military will be represented."

"We are happy to once again welcome the public inside our gates free of charge for this extraordinary event," said the 127th Wing commander, in a recent editorial. "This year's theme is 'The Next 100 Years,' and we are delighted to feature the Air Combat F-22 Raptor Demonstration Team as one of our headline acts."

Also being highlighted during the show is the aircraft and equipment of the 127th Wing. That includes its A-10 Thunderbolt II, Army National Guard's CH-47 Chinook helicopter, the U.S. Coast Guard's HH65 Dolphin helicopter and Vaught's KC-135 Stratotanker.

Being the show's director, Vaught is likely to be busy with the show but his crew will be highlighting the importance of this giant fortress, which not only allows fighter planes to extend their missions through its refueling capabilities but also provides military transport for soldiers, emergency evacuations and equipment. Being a part of a crew that does so many things is why Vaught chose to pilot the KC-135.

"There's an overwhelming feeling of accomplishment as a KC-135 pilot," Vaught said, noting that another big bird flying over Selfridge Field will be the C-17 cargo plane and to the delight of Top Gun fans, Canada's Royal Canadian Air Force F-18 demonstration team.

"There will be more than eight hours of aerial demonstrations and performances over the course of two days. You will see high speed chases, tight turns. They're going to be pushing their airplanes to the limits," Vaught said, of the air show's pilots. "I know they're not allowed to break the speed of sound, but they will be flying at high speeds."

SANG celebrated its 100th anniversary with an air show in August of 2017. Over the years the base has grown to more than 70 tenants (from 40 in 2017) and about 5,000 military and civilian personnel who greatly contribute to Macomb County's economy. The last annual report from the 127th Wing stated it has an estimated annual impact of $850 million.

This year's theme looks ahead.

"The significance of the theme ties into where we are going in terms of technology as the world's greatest military," Vaught said.

Team Selfridge Open House and Air Show will be held at Selfridge Air National Guard Base in Harrison Towship on July 9-10. Gates open at 8 a.m. and close at 4 p.m. Saturday and Sunday. Aerial performances will begin at 11 a.m. For more information about the show, visit teamselfridge.com/faqs/.