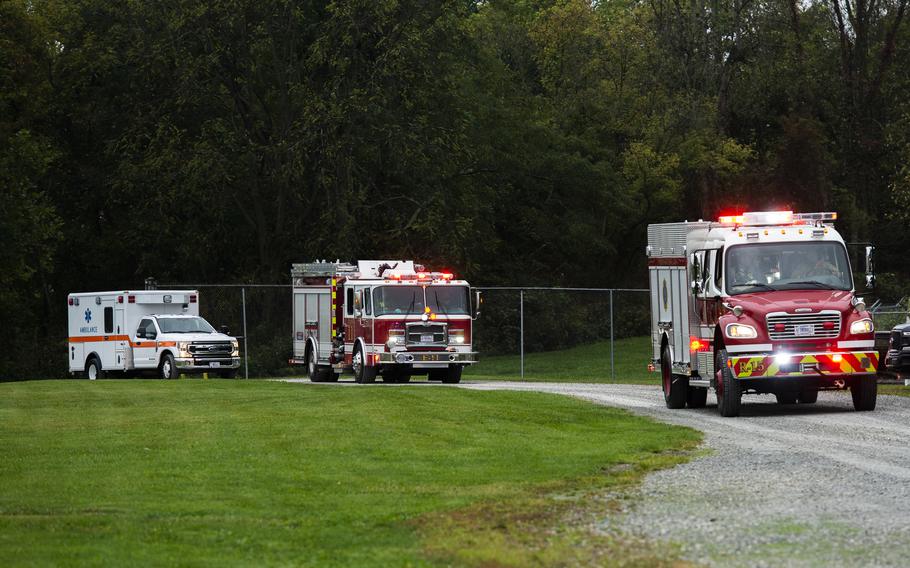 First responders arrive on scene at a simulated C-17 aircraft crash as part of a base exercise, at Wright-Patterson Air Force Base, Ohio. Readiness exercises are routinely held to streamline unit cohesion when responding to emergencies. (Wesley Farnsworth/U.S. Air Force)

The drill will simulate an aircraft mishap with “mass casualties,” the base said in a notice on its website. First responders will immediately head to the exercise location, and an 88th Air Base Wing inspection team will evaluate response across the base.

People may see emergency-response vehicles moving around the base, with temporary blockage of some roadways, traffic backups at some base gates, alert sirens and telephone and electronic-notification methods.

Wright-Patterson is asking individuals on and around the base not to call 911.

Base planners said personnel in the exercise “should perform tasks as realistically as possible, given available resources and each organization’s specific responsibilities.”

“We conduct emergency-management exercises throughout the year to test our first responders such as security forces, firefighters and medical, so the base is prepared for a real-world mishap,” said John Rehak, 88th Air Base Wing exercise and inspection program manager.

“It’s important for everyone to participate in base exercises because an incident could happen at any time,” Rehak also said. “Exercises make us better prepared and lessons learned can potentially save lives.”