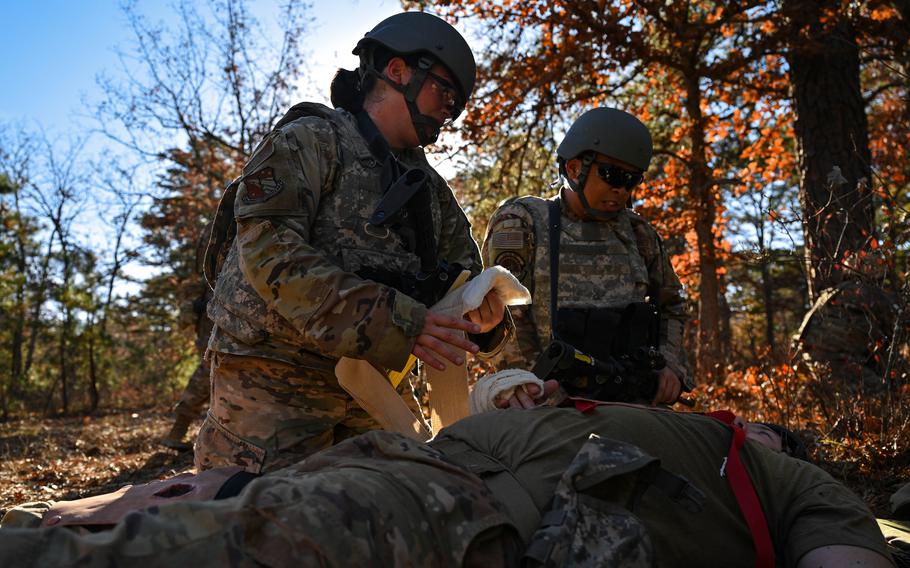 BEAVERCREEK, Ohio (Tribune News Service) — Airmen and guardians will be learning how to deliver lifesaving care while on the front lines at a new training center at Soin Medical Center.

This is the first formal Air Force critical care technician program, according to the project partners.

The first set of students started the program on Monday. One-hundred students will train each year and also do rotations at Kettering Health ICUs.

Col. Tory Woodard, commander of USAF School of Aerospace Medicine, said these military personnel often go out into locations where they don't have the medical resources that they wish they had.

"This allows us to train these technicians in the advanced critical care of skills that they need to help bridge that gap between some of our providers and nurses, especially in that austere location," Woodard said.

The training center has two simulation labs, two classrooms and administrative offices. The training mannequins, which Woodard called "high fidelity," are designed to realistically simulate a patient in distress.

"This training center is made up of labs that recreate complex real life situations," Daniel Tryon, president of Soin Medical Center, said.

Michael Bridges, founder of local defense contractor Peerless Technologies, said the decision to be a part of the project was easy.

Bridges said one of the reasons for the decision was that in 2019, a former employee collapsed against the wall. They called 911 and had an automatic external defibrillator on the wall they used, and help arrived shortly. The man had died but was brought back to life and was able to see his son come home from Afghanistan.

"It impressed upon me how critical every second is when you're caring for someone," he said.

He also said his decision was driven by the care at Soin that saved his wife's life when she had COVID at the very beginning of the pandemic. She was treated in the newly set up COVID unit, and was eventually able to recover.