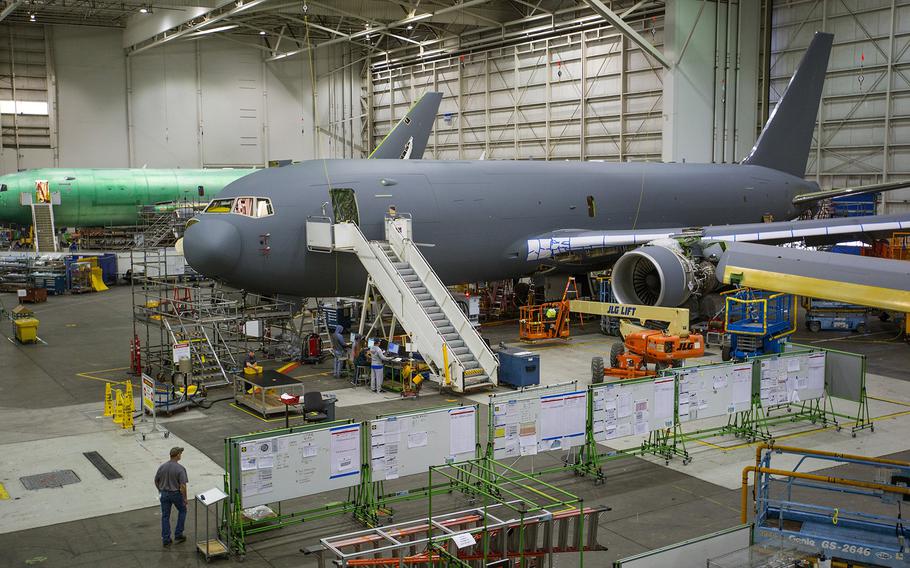 (Tribune News Service) — Boeing this month discovered the latest in a long line of glitches on its KC-46 aircraft: Some trim hanging down above the over-wing emergency exit doors prevents them from opening.

Though the KC-46 is designed as a troop transport as well as an air-to-air refueling aircraft, Boeing somehow missed this basic exit flaw in the tanker's emergency egress system.

Every commercial airplane Boeing designs, including the 767 that is the basic airframe for the KC-46, is tested during certification to make sure all passengers can evacuate in an emergency within 90 seconds.

For this defect-plagued military variant, which entered service in 2019, no such test was run.

"We are carefully examining our processes to determine why this issue was not identified sooner," said Boeing in response to Seattle Times questions.

The timing of the discovery is awkward.

At a media roundtable last Friday, Air Force Secretary Frank Kendall told reporters that the Pentagon will likely not allow Airbus to compete for the next tranche of Air Force tankers, as had been expected, but will instead opt to stay with Boeing and ask only for "a modified KC-46."

The newly discovered door trim problem affects all KC-46 tankers previously delivered, including the 57 already being flown by the U.S. Air Force and the two tankers in service with the Japanese military.

Boeing will have to retrofit all those tankers once it comes up with a permanent fix.

In the meantime, Boeing released a service bulletin to the Air Force with instructions to unscrew the piece of trim that interferes with the doors and attach it with Velcro instead.

Boeing said this provides "a temporary solution to ensure continued safe operation of the aircraft."

In a statement acknowledging the problem, the Air Force said, "This change removes the associated emergency risk until a permanent modification can be made."

Boeing said it identified the problem on March 17 "and immediately notified the Air Force." The service letter with the temporary Velcro fix was issued on March 21.

The KC-46 is primarily an air-to-air refueling tanker. For that mission, it has only a flight crew aboard and they have their own emergency exit doors in the forward section of the aircraft.

However, the plane can also be configured in the rear cargo cabin for an aeromedical mission carrying injured personnel or with passenger seats installed as a troop transport.

"There have been missions with passenger or aeromedical configuration," Boeing said.

The exits over the wing are there to help quickly evacuate from this area of the plane. The Air Force statement said the door trim problem could "hinder egress during an emergency."

It wouldn't entirely prevent passengers exiting because there is one other pair of emergency exit doors in the aft area not affected by the door trim obstruction.

Boeing said no event has arisen in service that would have tested the over-wing exit doors.

"In the more than 7,000 sorties the KC-46 has flown there have been no emergencies requiring use of the over-wing emergency door," Boeing said.

The company said it doesn't yet have a cost estimate for developing the fix and retrofitting the tanker fleet.

The military has not characterized the door trim issue as a serious deficiency, as it has for multiple previous design and manufacturing problems that have plagued the tanker program and for which costs have mounted.

In 2019, Boeing was forced to ground the KC-46s it was then flight testing after the Air Force expressed concern about loose tools and other debris found inside the completed airplanes.

The most serious outstanding problem is with the remote vision system used to operate the plane's refueling boom. That requires a complete redesign, a project expected to take several years.

Airbus, in partnership with Lockheed Martin, had hoped to take advantage of Boeing's troubles and offer its A330-based tanker for the Pentagon's pending second big tanker contract.

And yet last week, Air Force Secretary Kendall indicated Airbus may not even get the chance to compete for that contract.

"As we ... look further out, the requirements start to look like a modified KC-46 more than they do a completely new design," Kendall told reporters. "I think there's still a possibility of a competition out there, but as we've looked at our requirements, the likelihood of a competition will come down."