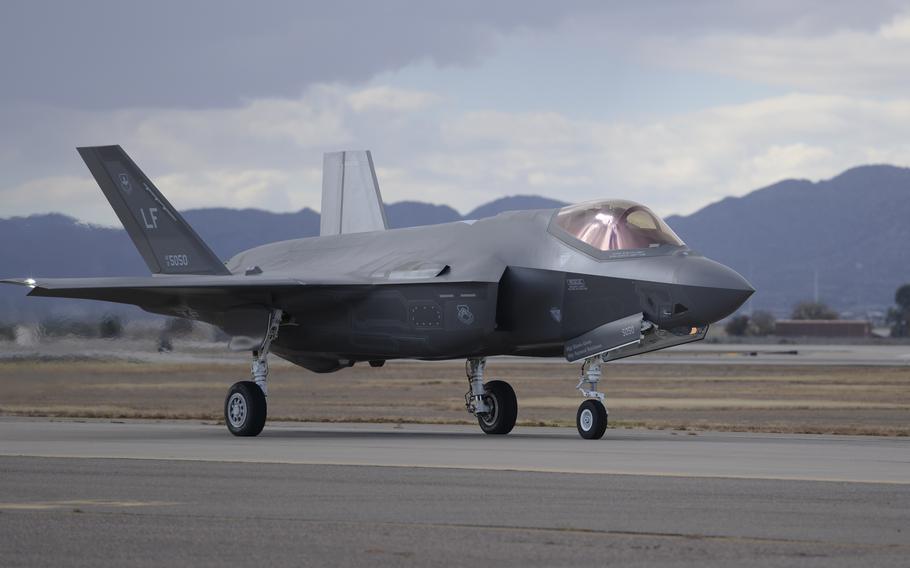 An F-35 taxis from the runway onto the flightline after successfully completing a sortie, Dec. 14, 2015, at Luke Air Force Base. (Ridge Shan/U.S. Air Force)

The complaint asks EPA Administrator Michael Regan to block the deployment of the jets or develop a plan to mitigate noise from the jets and groundwater contamination resulting from the use of PFAS-laden firefighting foam at the airport.

Safe Skies leader Steven Klafka said the complaint is asking the Biden administration to "do the right thing" and honor its commitment to environmental justice, the notion that the negative impacts of policy decisions should not fall disproportionately on disadvantaged communities.

"They were clear that they take this seriously," Klafka said.

Other groups signed on to the complaint, including Midwest Environmental Advocates, Wisconsin Environmental Health Network, the Madison teachers' union and School Board.

According to the Air Force's environmental review, the new — and arguably louder — jets will expose more than 1,000 households to unhealthy levels of noise. City leaders also fear the increased noise could affect as many as 10 schools, including some where large numbers of students are already falling behind their peers.

"Teaching stops when students are distracted by the loud jets flying over the school throughout the day," Lozano said. "Students lose track of the lesson and their learning is interrupted."

Safe Skies also complains the National Guard is not doing enough to clean up toxic "forever chemicals" that have been found in soil and groundwater under the base and are believed to be connected to contamination of Starkweather Creek, Lake Monona and at least one Madison municipal well.

The group claims the total cost of the 20-jet squadron could exceed $2 trillion, yet the military has yet to fully fund PFAS cleanup, which may not be completed for more than a decade.

Safe Skies says the government should purchase impacted homes and relocate residents; fund soundproofing for homes, schools and businesses; stop construction on the base "until there is a comprehensive program" to investigate and clean up PFAS; pay for water filtration; and set up a "fish exchange" program for contaminated fish from Starkweather Creek and local lakes.

The anti-jet group has filed two federal lawsuits since the Air Force selected the 115th Fighter Wing as one of two units to get F-35s next year, replacing the current fleet of 34-year-old F-16s.

The group says they were "complicit in promoting environmental injustice and environmental racism due to their approval, support or acquiescence" in the basing decision.

Spokespeople for the accused officials did not respond to a request for comment.