The Spirit of Georgia B-2 bomber after coming to a stop in a grassy area east of the runway at Whiteman Air Force Base, Missouri, Sept. 14, 2021. A mechanical failure caused the left landing gear to collapse, causing the left wing to make contact with the runway and damaging parts of the left side of the aircraft. (U.S. Air Force)

Worn springs in the landing gear caused a B-2 Spirit bomber to crash on the runway last year at Missouri’s Whiteman Air Force Base, according to a recently released investigation report.

The B-2, assigned to the 393rd Bomb Squadron of the 509th Bomb Wing and known as the Spirit of Georgia, was significantly damaged in the Sept. 14 crash. The two pilots escaped unscathed.

Preliminary estimates put the cost of repairing the B-2 at a minimum of $10.1 million, though the final cost is still to be determined, according to the Air Force Global Strike Command report, which was released Thursday.

The Air Force has said the bombers cost approximately $2 billion apiece, making the B-2 Spirit one of the most expensive aircraft in the world.

The landing gear’s lock link springs didn’t maintain enough pressure to prevent the jet’s left main landing gear from folding in on itself as the plane touched down, the report said.

This spring failure and resulting landing gear collapse was the lead cause of the accident, Air Force Col. Robert Cocke, the investigation board president, wrote in the conclusion of the report, dated Jan. 12. 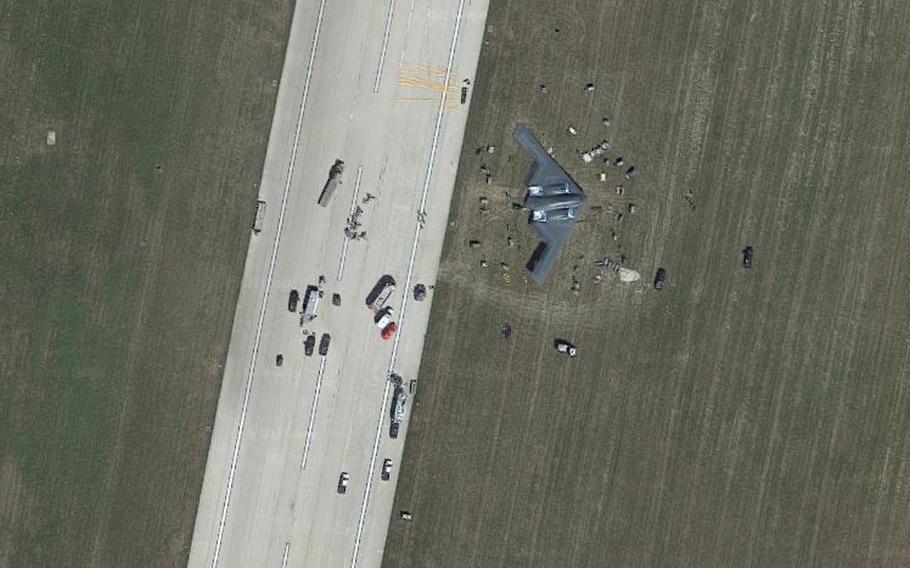 A satellite image screenshot shows a B-2 Spirit bomber, known as the Spirit of Georgia, surrounded by first responders and maintenance personnel in the grass off the flight line at Whiteman Air Force Base, Missouri, Sept. 14, 2021. The stealth bomber suffered an in-flight malfunction due to faulty landing gear springs and skidded off the runway. (Google Maps)

Investigators cleared Air Force maintenance workers and found no evidence of pilot error by the two-man crew. Preflight inspections were conducted properly and both active-duty pilots were fully qualified, physically fit and medically cleared to fly, according to the findings.

Since 2018, a change in maintenance procedures has required replacement of the springs during programmed depot maintenance. The stealth bombers undergo this in-depth maintenance approximately every nine years.

The Spirit of Georgia last went through that process in 2014, long before a change of the spring was made mandatory. After the inspection, the original springs were reinstalled.

Investigators found no evidence that the springs had ever been replaced. The failing pieces had remained untouched for at least a decade, according to the report.

A post-crash analysis of the failed components by the Air Force Research Laboratory at Wright-Patterson Air Force Base in Ohio showed that the springs produced approximately 11% less tension than they should have, clearly outside established tolerance levels, according to the report.

Shape-memory couplings, commonly known as CryoFit couplings, are used to seal tubes and hydraulic or fuel lines in confined areas where welding and brazing with bulky equipment is difficult.

This led to pressure loss that prevented the hydraulic system from helping the landing gear stay down and locked, according to the investigators.

There have been eight previous cases of a dual failure of the B-2’s landing gear hydraulic systems in flight. However, none of those failures resulted in a landing gear collapse.

Immediately after the crash, the Federal Aviation Administration announced a temporary flight restriction around Whiteman Air Force Base. The unusual announcement attracted attention from aviation trackers, which led to the first news reports of the crash.

The B-2A Spirit can deliver both conventional and nuclear munitions. Its radar-evading stealth characteristics are designed to allow the crew of two to penetrate enemy airspace and take out heavily defended targets.

Aerospace manufacturer Northrop Grumman built only 21 of the stealth bombers between 1988 and 1997. After a 2008 crash in Guam and the more recent one in Missouri, only 19 remain in service.

With the expected arrival of the B-21 Raider by the mid-2020s, the B-2’s successor, it remains unclear whether the Air Force will opt to repair the Spirit of Georgia or scrap it for parts for its remaining fleet.