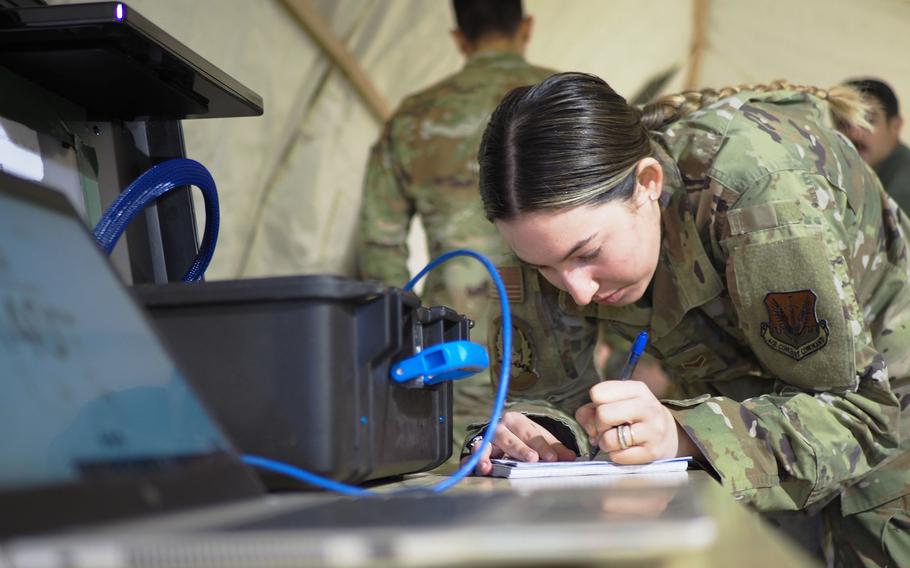 (Tribune News Service) — It made for an unusual exercise at Langley Air Force Base. A group of intelligence specialists were handed some new communications gear and directed to set up a “C3″ operation — command, control and communications — as if they’d just been dispatched to a remote and unused airfield.

Unusual because the observers — a team from Air Combat Command’s new Agile Battle Lab operation — weren’t there to grade the airmen. They were there to learn.

The lessons were about a new Air Force focus on preparing airmen for tasks outside their specialties and to move the force to a mindset more like the expeditionary units at the Navy’s Little Creek base, the Marines who board Norfolk-based amphibious ships and the Army’s Fort Eustis-based 7th Transportation Brigade.

“We don’t want them to have to wait for a comms specialist,” said Master Sgt. Andrea Murray, the Agile Battle Lab’s Langley-based intelligence integration manager.

“They did great. They got everything up and running in 10 minutes ... their web was running I think at 10 times the usual speeds,” she said.

And they showed a new technology developed by the lab and its contractor, including satellite links, on-the-ground gear, software “and stuff I’m not going to tell you about” was simple to set up in difficult terrain and then operate.

“Even a pilot could do it,” she said, grinning at the lab’s commander, Lt. Col. Adam Chitwood.

Looking at the Langley exercise as a learning experience, rather than a way of assessing what airmen know and how well they do already-defined tasks, is emblematic of the Air Force’s new Agile Combat Employment push, Chitwood said.

It is also about moving fast, he said.

That’s why the lab has developed its “chat-bot,” an app that lets airmen, like the ones at the Langley exercise, give staff real-time feedback about what they’re experiencing.

That’s information an exercise observer can’t always see, Chitwood said. And it can be information about issues the lab might never otherwise hear about in any kind of focused way.

That feedback doesn’t always involve the lab’s new hardware, either.

“If you’ve got one airman saying his hands are cold, well that’s one thing,” Murray said. “If you’ve got 40 saying it, you probably need to ask about whether they’re getting gloves.”

To keep the C-3 initiative on a fast track, Murray’s already been out to Davis–Monthan Air Force Base in Arizona to introduce the C-3 systems that the intelligence airmen tested at Langley to the 354th Fighter Group, which files A-10 Thunderbolts in the challenging missions of close air support and forward air control.

She’s heading out shortly to Hill Air Force Base in Utah, on the same mission.

Since the Langley exercise, she’s also been hosting groups at her Langley offices, introducing the system and other Battle lab initiatives.

The work does involve some changes in mindset, Chitwood said.

The focus on technology that’s easy to set up and use, and robust enough to stand rough handling in difficult environments by airmen who aren’t necessarily expert is a design challenge that’s different than what a lot of engineers are used to.

Once ready to use, acquiring equipment can mean moving faster than procurement departments sometimes like to move.

And as for the airmen, he said:

“There’s a mindset thing, in terms of taking risk. When you try something new, you’re going to worry you’re not going to do it as well as what you already know ... but you know, we sign up because we want to serve and we want to do the best job we can.”

That, he said, is what makes the battle lab’s efforts work.