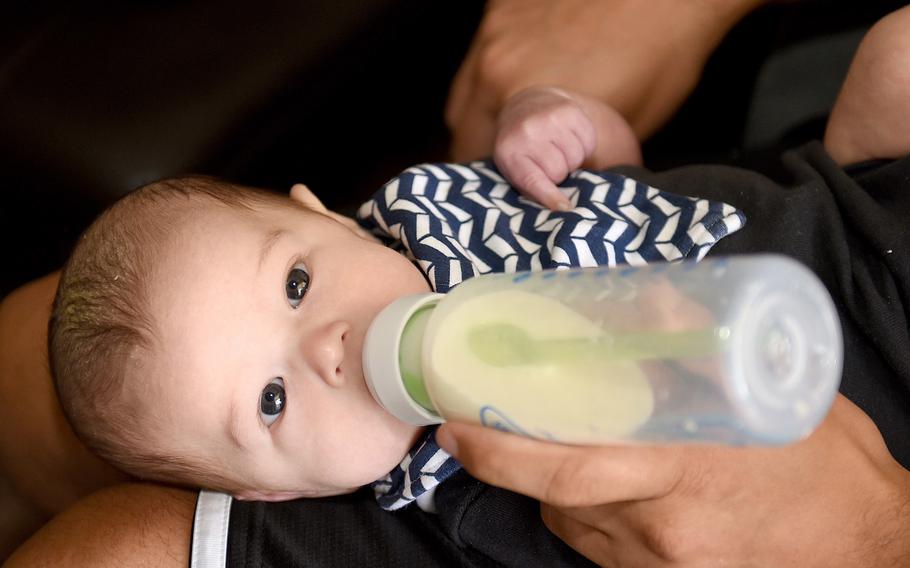 Either parent in dual-Air Force marriages may now request to separate from active duty up to 12 months after the birth or adoption of a child, the service announced this week. (Mercedes Porter/U.S. Air Force)

Either person in a dual-Air Force marriage now may request to separate from active duty up to 12 months after the birth or adoption of a child, the service announced this week.

Prior to the change, the separation option applied only to the mother in such marriages.

It’s the second update of the policy in five years, as the service looks to be more diverse and inclusive. In 2017, the Air Force gave new mothers up to 12 months after having a baby to request separation from active duty.

Previously, pregnant women had the option to leave the service only before giving birth.

The ability to apply for caregiver separation allows “new parents more time to decide how to balance their careers with a new child,” Lt. Gen. Brian Kelly, deputy chief of staff for manpower, personnel and services, said in a statement Tuesday.

The top enlisted leader in the service said the policy took effect March 1.

“We’re getting after it, folks … with more to come,” Chief Master Sgt. of the Air Force JoAnne Bass said on her official Facebook page Tuesday.

Bass’ post had garnered nearly 3,000 likes and 240 comments as of Wednesday afternoon, and many of those who posted welcomed the change.

“Thank you AF! This is the biggest step in the right direction, for both men AND women!” one commenter wrote.

Several women said they wished that this had been the policy when they were in the Air Force.

“I’m so happy those behind me have this option so maybe it’s not as much of a struggle for them like it was for me,” said one post. “I hope more women are able to pursue their ambitions with this option instead of feeling like they don’t have a choice.”

A few said the option needs to be extended to all dual-military couples, not just ones in which both spouses are in the Air Force. Some argued that the choice should be given to Guard and Reserve members as well, and also to airmen married to civilians with full-time jobs.

Requests for caregiver separations are evaluated on individual merit and may be denied if they are not in the best interest of the Air Force, the service said.

Airmen may still apply for pregnancy separation before the birth of a child or for childbirth separation, which allows for voluntary separation for up to 12 months after childbirth.

The Army and the Navy allow for voluntary separation after the onset of parenthood under certain conditions.

Army regulations say a married soldier who becomes a parent by birth, adoption or marriage may apply for separation under hardship. The child or children must be under 18 and reside in the same household.

The service member must show evidence that the roles of soldier and parent are incompatible and that he or she “cannot adequately fulfill his or her military obligation without neglecting the child or children,” according to Army policy.

But the Army also says parenthood alone does not form the basis for hardship.

In the Navy, the Navy Personnel Command determines which member of two-sailor couples will be retained and which one will be separated, the service’s policy states. Commanders of both sailors have a say in the process.

Both the Army and the Navy allow pregnant service members to request separation because of pregnancy. But Navy regulations say that such requests normally are denied unless it determines separation to be in the best interest of the Navy or the sailor demonstrates a compelling personal need for separation.