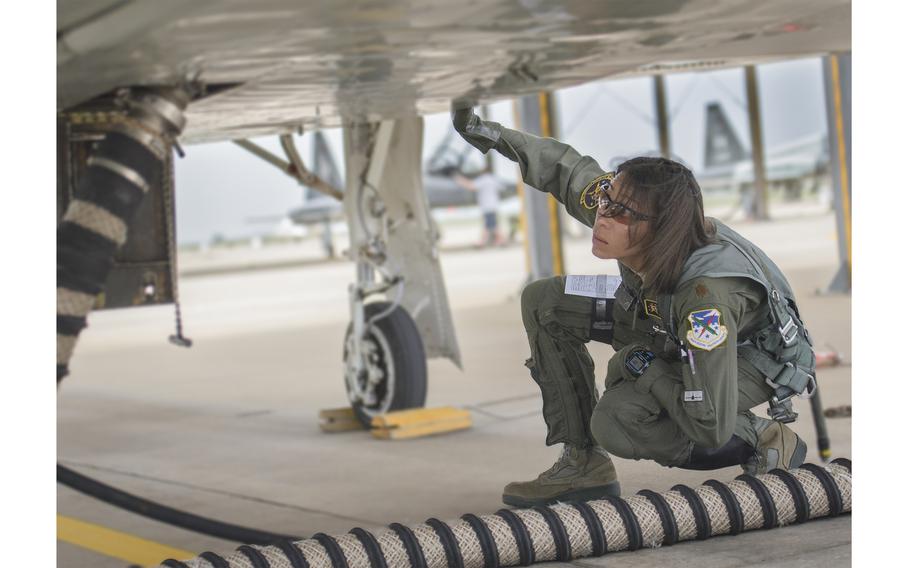 Then-Maj. Christina Hopper conducts a comprehensive check of her T-38 Talon on the flight line at Vance Air Force Base, Okla., in 2015. (David Poe/U.S. Air Force)

(Tribune News Service) — A fighter and instructor pilot in Enid says casting a vision as one of the first Black female pilots in the military has been a highlight of her career.

Lt. Col. Christina Hopper has been blazing a historic trail for women in aviation since she earned her pilot wings over 20 years ago at Vance Air Force Base, where she is now a reserve T-38C instructor pilot with the 5th Flying Training Squadron.

“You be the first. You be the one who gets out in front so that the next generation does see somebody who looks like them,” Hopper said.

Among her firsts is having been the first Black female fighter pilot in a major war.

“I think when we look at the lack of females and minorities in aviation, a lot of it is capturing their hearts and minds, and casting a vision for them when they are young,” Hopper said.

The military’s first Black female pilot and first Air Force lieutenant general was Stayce Harris, who retired a few years ago as a three-star general.

Lt. Col. Rochelle Kimbrell, another Black female student pilot, also was going through training when Hopper got her wings in 2000.

“We are such a small community, we all know each other,” she said. “(Kimbrell) and I were peers, and we kind of went through it together. We were the first two Black female fighter pilots, not just in the Air Force, but really in the military.”

Hopper’s path started at the University of Texas at Austin, where she received a Bachelor of Arts in psychology and was commissioned through the Air Force Reserve Office’s Training Corp (ROTC).

Hopper left active duty after 10 years of service to be at home with her three children. She was a stay-at-home mom for five years, then joined the Air Force Reserve as T-38 instructor at Laughlin Air Force Base in Del Rio, Texas.

In 2014, Hopper moved back to Enid with her children and her husband, Lt. Col. Aaron Hopper, an active-duty instructor pilot at Vance who returned after retirement due to an instructor shortage.

Hopper describes her journey as a non-traditional pathway, though, having never dreamed about being a pilot.

She’d wanted to study psychology because she thought she would be a psychologist or doctor, but when she was a junior at UT, her ROTC commander called Hopper into his office and asked why she hadn’t put in her application for pilot training.

She told him she didn’t think she was qualified, because she didn’t have a technical degree and her aptitude scores weren’t high enough, but the colonel encouraged Hopper to take the test again and think about applying.

Two weeks later, she had a vivid dream that told her to become a pilot. She took the test again and passed in the navigation and aviation category by just a few points.

“At that time, I wasn’t sure I had what it took, if I had the capacity to think spatially, to become an aviator,” Hopper said. “But in the process of going through pilot training, I realized there are a lot of similarities and the athletic mentality and spatial thinking on the court and being able to translate that to the sky. There were a lot of things in aviation that were so similar to the way that I think and process, so I did really well.”

Both of Hopper’s parents were enlisted, so she knew what Air Force life was like growing up overseas and throughout the U.S., but she would never see females flying when they’d go to airshows.

“I was exposed to aviation by going to airshows, but just not exposed in the sense that it captured my heart and my mind,” she said.

Though Hopper said representation is important, the lack of visibility should be seen as an opportunity instead of a barrier.

“I think that when you look at (Kimbrell), myself and Gen. Harris ... we didn’t see somebody who looked like us and we still got out and did it,” she said. “I think that’s how we begin to overcome barriers.”