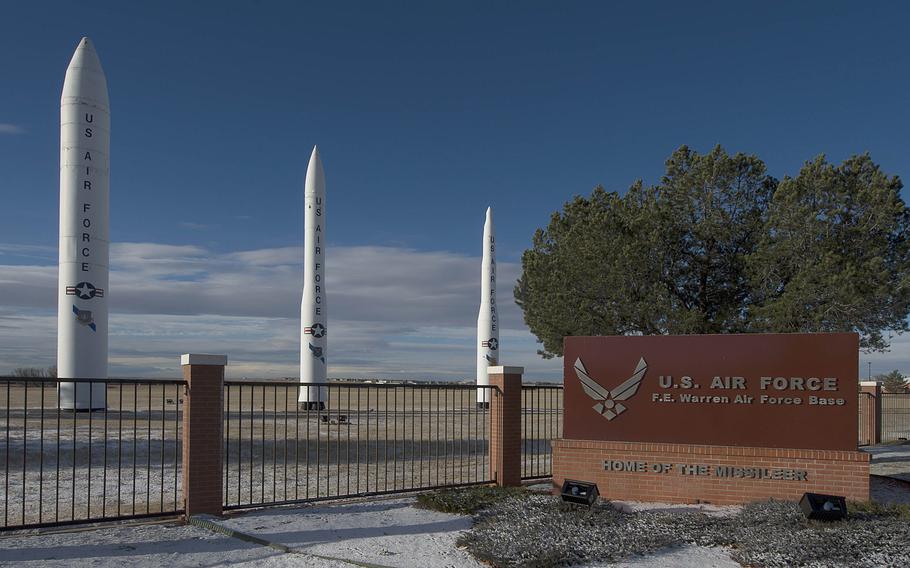 CHEYENNE, Wyo. (Tribune News Service) — In a seemingly aimless, but determined drive, the small tour bus takes highways and dirt roads out to a place so barren, there likely isn’t another human being for miles.

The snow covers the ground and merges with the silver sky, while the cold air seems to penetrate the thick safety-grade windows, through which clouds of horned larks skip and dance out over vast plains like one dense organism.

But then there’s something different: Two tan metal structures, fenced in and containing warning signs that advise approaching vehicles of something their drivers already know.

They have reached Alpha-01 Missile Alert Facility, a structure identical to 15 other facilities found throughout Wyoming. Each one supervises 10 missile silos, every one built to contain an intercontinental ballistic missile known as the LGM-30G Minuteman III.

The warhead on a Minuteman III is estimated to produce around 300-350 kilotons of energy. Though it detonates through a different process, that’s 20 times more than the 15 kilotons of energy produced by “ Little Boy,” the U.S. nuclear bomb dropped on Hiroshima, Japan, during World War II, killing 140,000 people.

It’s rare that the media has the permission to tour a facility like this, but today is different. Normally, the only ones who travel through the heavily secured front gate are the members of the United States Air Force that live at Alpha-01 on and off throughout the year in a series of controlled deployments.

On Feb. 16, there were 15 airmen and women stationed at this location. One facility manager, one chef, four missileers and nine security officers, all of whom make Alpha-01 their home for seven days at a time, each with specific responsibilities.

The facility is unassuming, even underwhelming, but it houses the military personnel that are responsible for the United States’ mission of land-based nuclear deterrence.

Nuclear deterrence provides a level of security that most Americans struggle to comprehend, even in times like these, when Russian President Vladimir Putin has launched an invasion of neighboring Ukraine and threatened the rest of the world with his country’s nuclear arsenal.

Consider the varying levels of security an average person experiences in a day, from protecting themselves with a firearm to knowing that there’s a local police force that will respond to any distress. Think bigger, then think bigger again, and still one might fail to understand how protected Americans really are by the nuclear triad, or the accumulation of all land, air and sea-based nuclear weaponry constantly on alert around the globe, at the ready.

It’s seems like a scary reality to occupy every day, but just by walking through the living quarters of the MAF, it’s hard to tell there’s anything grave at stake. Besides two heavily armored Humvees, equipped with ascending calibers of weaponry, it’s almost like a college dormitory.

There’s a living quarter, where off-shift airmen and women gather to watch TV, play video games and eat food made by services journeyman Nadia Carter, who works as the chef.

It may sound excessive, but having Carter’s fresh cooking is a significant morale booster when those stationed at Alpha-01 could be required to eat MREs for every meal.

The MAF is self-sustaining, and if anything breaks or fails, Staff Sgt. Anthony Glaister, the facility manager, has to take care of it. A “Swiss Army knife” when it comes to responsibility, Glaister keeps operations running according to plan, from clearing snowdrifts to fixing plumbing.

Glaister’s been stationed there since 2016, but his responsibilities have been particularly taxing recently.

The Alpha-01 facility, and others like it, are still largely functioning off of original infrastructure from the 1960s. There are plans to upgrade these facilities in the coming years, gutting them almost completely so the military personnel aren’t regularly working to maintain 50-year-old equipment.

In one sense, these upgrades — to a new missile system known as Ground Based Strategic Deterrent — are well overdue.

“We’ve already pushed the limits of this for three generations, when it was only created for one,” Coslett said. “There’s been somebody on alert out in these fields for the last 50 years. There’s never been a day we have not had somebody on alert.”

This doesn’t stop the facilities from running the way they should. Security operators, such as Airman 1st Class Justin Smith, are on a 12-hour shift, constantly making rounds and responding to signals at the surrounding silos.

Smith had just returned from the field, stepping away from the Humvee to speak with the media on the importance of his role. It is Smith’s responsibility to protect the people stationed at this facility, and the weight of his mission is constantly at the forefront of his mind.

“Security is very meticulous — it’s nuclear, it’s serious,” Smith said. “You’ve got to know how to do everything to a T. There’s checklists to follow. There’s multiple guidelines and standards you need to know to achieve yours.”

Because of security operators, everything looks normal topside. Where things begin to change, and the true purpose of the operation reveals itself, is when one crosses behind security doors and rides an elevator some 60 feet below surface, like descending a mineshaft.

At the bottom, behind doors designed several feet thick that are meant to withstand a nuclear blast, sit the missileers. They just might be in the safest location in the state — a spot designed similar to an egg safely suspended in a shoebox.

The inside of the command console looks eerily similar to any military office space. With khaki-colored walls, carpet and filing cabinets — there are even some papers held up by clothes pins, the old-fashioned way.

It’s in this office, one as unassuming as the rest of the facility, that the missileers monitor the status of the United States’ nuclear missiles. If they had to, in some extreme scenario, they are also the ones that turn the key to launch the missile.

This office is suspended in a grand circular bunker meant to withstand a nuclear blast. Should an incoming missile make contact and rattle the earth, the office would better absorb the blast and keep the missileers safe.

In this disaster scenario, the missileers, now the sole survivors at Alpha-01, would then eventually climb out of command center, open a hatch and ascend to the surface, which would certainly be flattened.

If this sounds like the revealing of classified information, it isn’t. Prior to the media’s entry, the area was swept clean. But yes, normally, there’s restricted data circulating in this office, and it’s heavily secure.

Residents can take a tour like this for themselves at the retired Quebec-01 Missile Alert Facility, which is now a Wyoming State Parks Historic Site, north of Cheyenne.

Protecting America and the world

There’s no “going rogue,” as popular media likes to depict. There are so many checks and balances to launching a nuclear missile that it seems almost impossible to get a shot off. That being said, the entire process for one missile to launch, reach outer space and travel back down to a target across the world take about 20 minutes.

Missileers spend a whole 24 hours underground, each normally serving a 12-hour shift. Matsuo is the Missile Atomic Group Commander, and on Feb. 16, she just wanted to get some sleep after a surprise 36-hour shift.

Being the group commander, Matsuo has to know everything there is to know, even outside her own responsibilities. At a moment’s notice, she must recall all the information she has acquired over the past several days and form it into the decision she makes, should it become time to act.

The current policy of the United States is “second strike,” a defensive stance meaning that no missile will be launched unless an enemy missile is already inbound. Matsuo, and the other missileers, understand their own impact at all times.

“We will only go if we already know something’s on the way, but Americans don’t go down without a fight,” Matsuo said. “So that’s what we’re here for, and that’s what missileers are here for.”

By the end of that week, the team stationed at Alpha-01 will have rotated out, and a new team like them will have moved in to assume their duties. In a month, they will return.

So is the life of the airmen and women of the 90th Missile Wing at F.E. Warren Air Force Base.