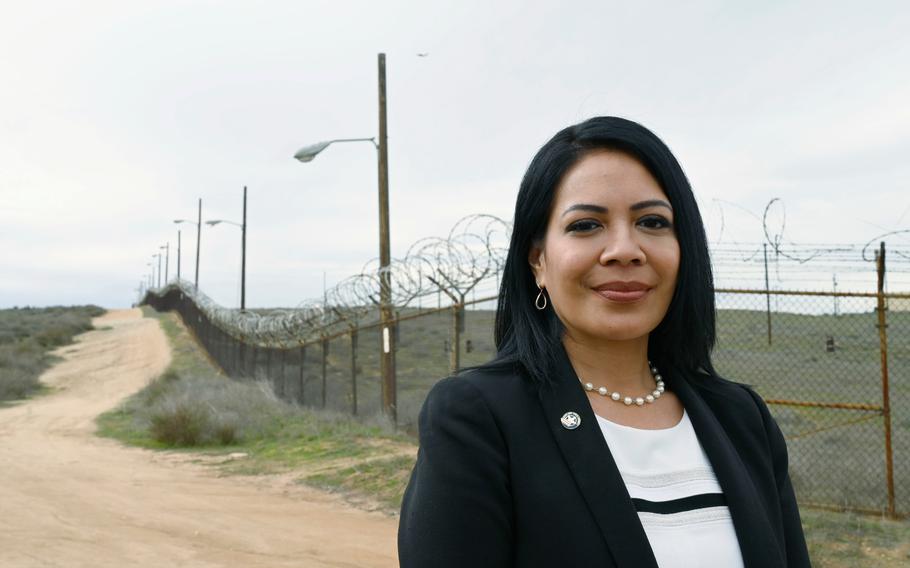 Grace Martin, executive director of the March Joint Powers Authority, stands by former March Air Force Base property ticketed for future development. After almost 30 years, the authority, which helped transform military surplus land around what is now March Air Reserve Base into a bustling hive of businesses, is winding down. (Terry Pierson, The Press-Enterprise/SCNG/TNS)

(Tribune News Service) — Would you trade thousands of jobs for a 4,500-acre ghost town?

The Inland Empire had no choice when March Air Force Base in California downsized in 1996. Left behind in the blizzard of pink slips was a maze of ex-military waste sites and abandoned buildings between Moreno Valley, Perris and Riverside.

Today, that land is home to about 90 businesses employing 12,000 people, parks, trails, senior and veteran housing, a Metrolink station, a widened freeway interchange and infrastructure like a concrete channel to prevent flooding.

Now, the public agency that guided the transformation is set to fade away in three to four years.

The authority’s land is “mostly developed,” said Dan Fairbanks, the authority’s planning director. “We will be essentially all developed (at) the point we wind down.”

Riverside County Supervisor Kevin Jeffries, who sits on the authority’s governing board, supports sunsetting the authority, saying via email that the agency “was never meant to be a permanent long-term form of government.”

As the authority nears the end, March Air Reserve Base’s future looks rosy. The U.S. Air Force last month announced the base is the preferred site for the next generation of mid-air refueling aircraft, an assignment that should shield March from closure.

Originally known as March Field, the base dates to World War I and served as a bomber crew training ground in World War II and a B-52 bomber base during the Cold War. Today, KC-135 tankers, C-17 cargo planes, F-15 and F-16 fighter jets and MQ-9 drones fly out of March.

In 1993, a federal commission recommended March shrink to an air reserve base. Thousands of jobs vanished and 4,500 acres of base property turned into surplus land, some of which became the Ben Clark Training Center used to train police officers, paramedics and firefighters.

Roughly 3,500 acres went to the authority, a joint venture between the county, Moreno Valley, Perris and Riverside. A special district independent of the county or any city, the authority has the power to review and approve development on its property.

While the authority is dissolving, part of it will carry on.

The March Inland Port Airport Authority, which deals with civil and commercial aviation — the base is open to non-military aircraft through a pact between the authority and the Air Force — will remain to work with the public and Air Force.

While the authority had thousands of acres to work with, it wasn’t a blank canvas. World War II prisoner-of-war facilities, 588 homes and an old church occupied land west of the 215 Freeway.

Gas and power lines, a former hospital, a non-commissioned officers club, dumping grounds and other Air Force leftovers had to be razed or cleaned up before anyone could move in. Some remnants of the old base remain today, including doghouses for guard dogs.

After years of planning, the authority recruited private developers to build out its land. Its largest businesses include:

Sysco, which supplies the hospitality industry

UCPath Center, which handles payroll and human resources services for the University of California

“I don’t know that it was possible, back in (1996), for anyone to imagine what this area would be like,” Martin said. “It took us a long time to find the right developers, the right partners to come in and help us redevelop old military lands.”

The authority’s footprint is also home to smaller businesses, from family apparel makers to medical and biotech companies, as well as a company that makes fireworks for Disneyland.

Fresh & Easy, a British grocery chain that debuted in Hemet before closing in 2015, was a tenant, as was cargo carrier DHL, which left in 2008 amid neighborhood outrage over noisy flights out of March.

Roughly 1,000 acres remain to be developed. A 1.9 million-square-foot Target distribution center on land just west of the runway and south of March Field Air Museum is currently under construction.

There’s also March LifeCare, a 236-acre medical, 3.6 million-square-foot campus proposed or pitched as the Inland Empire’s largest health care center. Authority commissioners approved March LifeCare in 2010, the same year then-Gov. Arnold Schwarzenegger attended a groundbreaking for the project, but the hospital towers and other features envisioned as part of it have yet to be built.

Infrastructure to supply the campus with water is under construction and the developer is in “the final stages” of finishing the sizing and layout of an acute care hospital and other buildings, Tomassi said, adding that plans also are moving forward for a continuing care retirement facility.

The authority also helped establish a foreign trade zone covering 400 square miles from Corona to Moreno Valley and Perris. Companies in the zone can defer, lower or eliminate customs duties on their products, among other benefits.

More than $2 billion in merchandise moved through the zone in 2020, according to the authority.

Besides luring commerce, authority projects have built parks and trails and set aside open space. The widening of the 215 at Van Buren Boulevard took place on authority land, which also is home to Metrolink’s Moreno Valley/March Field passenger rail station.

The authority also oversaw an $18 million project to build a concrete drainage ditch parallel to Heacock Street in Moreno Valley to stop heavy rains from flooding the base and 400 homes. Another $12 million culvert under construction will protect the base’s runway from flooding.

Warehouses dominate the Inland Empire, and authority officials estimate that 60% of businesses on authority land are tied to logistics.

Jeffries said his only criticism of the authority “is actually more about how our local economy changed.”

“I believe that much of the original effort for job creation was going to come from manufacturing and other light industrial uses,” he said. “The private sector changed and brought to the (authority) and area cities the warehouse industry and all its tractor trailer rigs.”

Making sure growth doesn’t harm the base — it employed 9,600 as of 2019, according to Riverside County — is one of the authority’s top priorities. Tall buildings, for example, might impede takeoffs and landings, and the wrong project in the wrong place might lead to disaster if a plane crashes like the F-16 that crashed in 2019 into a warehouse near March. Miraculously, no one was killed and only minor injuries were reported.

The authority works with base officials, the Federal Aviation Administration, the county Airport Land Use Commission, Air Force Reserve Command and the Air Force Civil Engineer Center to ensure projects don’t clash with base operations.

“All of these different construction projects that you see going on around the base, they’re able to help us consolidate all that and manage it and work with us,” Haynes said.

“Had I been there from the beginning, I would have done more to protect the perimeter of the base,” said Conder, a retired Air Force officer.

“There’s so much that is literally right on the base security line,” he said. “Over the last 25 years, they’ve allowed industry buildings and warehouses to come up right onto the base. That was a little bit short-sighted knowing what happens around military bases.”

Moreno Valley Mayor Yxstian Gutierrez, who represents his city on the governing board, said his city hasn’t seen a lot of businesses or public works projects on its end of the authority footprint.

“So I’m worried if that will ever be (built),” Gutierrez said. “At the same time, on the other side of the 215 near the Riverside area, that area has developed significantly.”

Under a tentative plan, the county, Moreno Valley, Perris and Riverside would equally split the authority’s tax revenue. That would come out to roughly $2.1 million annually for each of those governments based on last fiscal year’s numbers, and tax revenue would grow as authority lands are built out.

The winddown plan does not call for the authority’s three cities to annex any property. Instead, Riverside County would inherit authority land except for what’s controlled by the airport authority.

The base could be “a vital hub for commerce and defense” 20 years from now, Martin said, adding she hopes it will be “a critical part in building our nation’s Space Force and supporting the movement of people and goods in and out of space.”

“The March realignment was a blow. They came together to say … ‘We can make lemonade out of lemons,’” he said. “I just hope (people) appreciate that this wasn’t another group of people the government threw together for no reason. We were there for a purpose for 25 years. That purpose has been met.”