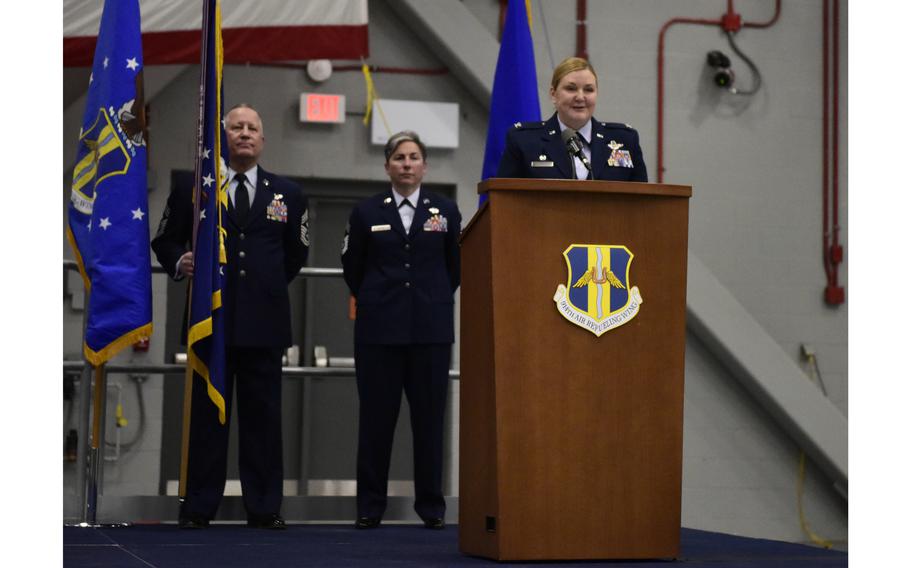 (Tribune News Service) — Commander of the 914th Air Refueling Wing Lara Morrison doesn’t pull any punches over the fact she was inspired as a child to enter the military. Early on, she knew she wanted to continue in the proud tradition of service and there was a reason behind that that, or rather, a person.

That person was retired Lt. Col. Karen Andersen of the Air National Guard, her mother.

“I grew up in the military. I have military in my blood,” Morrison said. “I love what I do. I watched my mother break glass ceilings and do what she did very, very well for a lot of years.”

At the beginning of her three-decade career, Morrison followed her mother by enlisting in the Air National Guard in 1989. She was then commissioned as an officer in 1996. She continued on to complete undergraduate pilot training in 1997 and joined the Air Force Reserves in 2001, and went on to command the 315th Operations Support Squadron.

On Saturday she was the recipient of an Assumption of Command ceremony where she was honored by Major General Jeffrey Pennington of Air Force Reserve Command to formally take command of the 914th Air Refueling Wing.

In her acceptance speech she said she was looking forward to meeting each and every Airman under her command. She also spoke of her fiancee, Jason Biethman, who she was proud to stand beside each day.

Finally she spoke of her mother.

“Here comes the tough part,” she said. “This is the part I’m going to talk about my mother.”

Morrison joked that she couldn’t look at her mother while talking about her.

“A very wise man told me you can either talk about your family or look at your family,” she said. “You can’t do both because it’s not going to go well. So, I am going to talk to you.’

“I wouldn’t be standing before you today if it were not for her love and support,” Morrison said. “When I was in pilot training, a very long time ago, and I was struggling, she sent me a card.”

In the card, which Morrison still has today, was the picture of a man bicycling up a steep hill.

“In the caption below it, it said, ‘No guts. No story,’ “ she said. “That card was her way of telling me to dig in and amazing opportunities would follow. This today, this command, is one of those opportunities and I’m so grateful for her everyday.”

For her part, Andersen said she, “couldn’t be more proud,” of her daughter and she made it a point to go to each of her promotions, traveling from her permanent home in Portland, Oregon.

“I was a Lieutenant Colonel with a medical unit,” Andersen said. “I’d take her in sometimes and that was how she got introduced.”