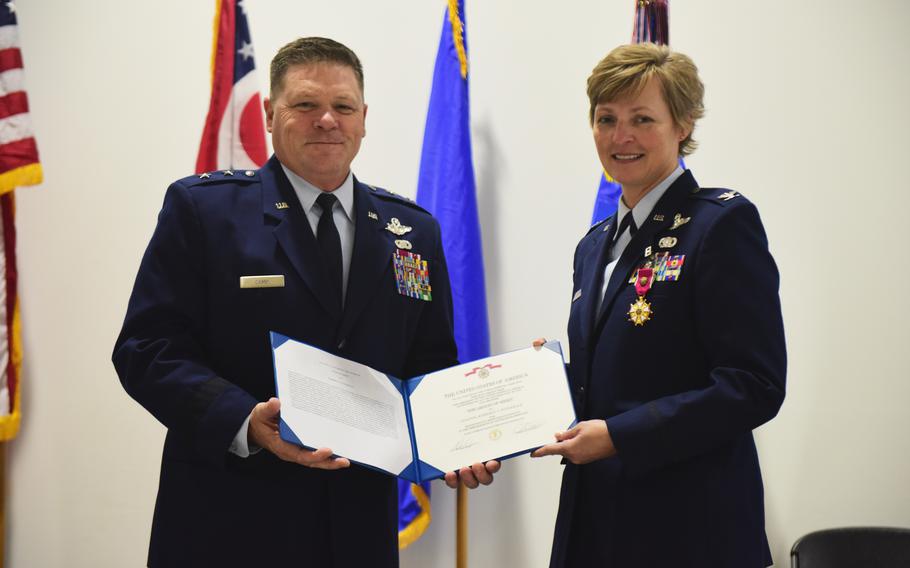 SPRINGFIELD, Ohio (Tribune News Service) — The former commander of the Ohio Air National Guard's 178th Wing unit based in Springfield retired from the branch this week.

Col. Kimberly Fitzgerald said she looks forward to continuing to support the airmen of the 178th Wing in retirement through community organizations. She had been at the wing since 2012 and began her service as commander of the wing shortly before the coronavirus pandemic started.

Fitzgerald stepped down as commander of the 178th Wing last year and Col. Dominic Fago assumed that responsibility during a ceremony in November.

Fitzgerald was the first female commander in that wing's history and her career spanned 28 years of service. After assuming the role as Wing Commander towards the end of 2019, she would soon be responsible for navigating challenges brought on by the global coronavirus pandemic in 2020 as well as supporting community, state and federal missions through troop deployments, according to a November news release from the Ohio Air National Guard.

"The perfect mix of discipline and compassion. (Fitzgerald) will do what she needs to do. She makes very difficult decisions. But she's very compassionate for her airmen and I'm sure that's left the mark here on this unit," said presiding officer Assistant Adjutant General James Camp during the 178th Wing's change of command ceremony in November.

With Fitzgerald's retirement and the change of command, Fago will now lead the wing as it provides intelligence for space operations, which is now under the United States Space Force.

However, the Ohio Air National Guard unit is still under the command of the U.S. Air Force and does not have a Space Force mission. But that could change in the future.

"While we continue to wait for the Space National Guard, our ISR (intelligence, surveillance and reconnaissance) group has pivoted from supporting NASIC (National Air and Space Intelligence Center) to support the new United States Space Force," Fitzgerald previously stated.

Fago has served in the Ohio National Guard for 36 years. As an Air Battle Manager, Fago has deployed on numerous occasions to Kuwait, Iraq, United Arab Emirates and other undisclosed locations, according to the news release.

In addition to previously commanding the 123rd Air Control Squadron, which recently became an official operating unit of the 178th Wing, Fago commanded the Maintenance Group for the 179th Airlift Wing in Mansfield.

Fago remarked on the beginning of his new command. "I'm replacing an outstanding officer and wing commander. And it's huge shoes to fill. It's a little bit intimidating, but I worked with her a long time. She helped and I am ready for the job."