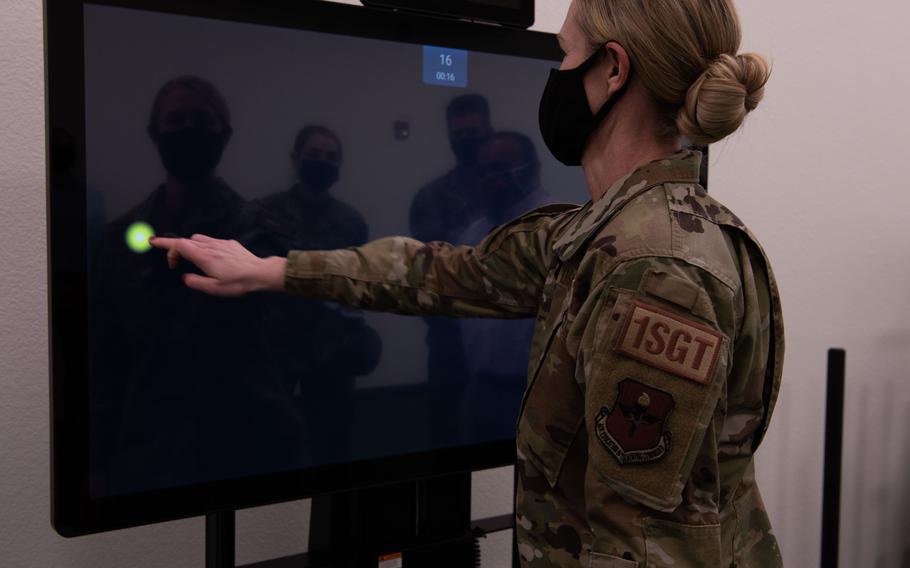 ENID, Okla. (Tribune News Service) — The new and improved human performance lab at Vance Air Force Base is much more than a fancy weight room.

The Comprehensive Readiness for Aircrew Flying Training (CRAFT) opened in a new location Friday, expanding to accommodate the needs of student and instructor pilots and human performance staff on base.

While CRAFT had been open on base for over a year, Vance's pilot instructors said the space in which they had to train students was improvised and too small for their needs.

Through the direction of expert strength and conditioning, cognitive performance specialists and dietitians, CRAFT is readying student pilots both physically and mentally.

For example, during a strength and conditioning workout trainees will be given concentration grids, puzzles, all sorts of other stressors which will begin to mimic patterns of what they are going to do in the air, instructor pilot Maj. Ryan Holets said.

The strength and conditioning coaches have experience in special warfare and working with Division 1 college teams and Olympic athletes. The dietitians help teach the students to fuel themselves correctly. Cognitive specialists help teach students to reframe their thoughts to be more productive and bounce back after a failure.

During flight simulation, the trainee's biometrics are tracked as they work through their flight patterns, identifying where they hit issues with information from the biometric data. Cognitive specialists will help a student reframe their thoughts around the mistakes, Holets said.

"When you start mixing all of these programs together, and that's really the benefit of the program — the true holistic nature of it," Holets said. "Strength and conditioning is pretty easy to understand because as students and instructor pilots are pulling G's in a T-6 or T-38, there is a lot of force on their bodies so it makes sense that we want to be in physical shape to handle the forces of the job."

Vance was the first Air Force base to scale undergraduate pilot training (UPT) 2.5, which was developed with help from Pilot Training Next, out of Texas, said Col. Jay Johnson, commander of the 71st Flying Training Wing. Vance has been a model for others in the Air Force, as other bases like Columbus Air Force Base in Mississippi begin scaling the UPT, Johnson said. That innovation and momentum has continued through to Vance's human performance lab.

"Human performance programs in the military are not a new concept," Holets said. "But CRAFT has improved the approach to training world-class pilots — treating student pilots like professional student athletes."

The tools and foundations of the program are meant to be used to holistically help pilots become better people, a better operator and a better fighter pilot, Holets said.

"The genesis of the program starts in Air Combat Command (ACC) and Air Force Special Operations Command (AFSOC), so think fighters and special operations, they have programs that do human performance," he said.

If a pilot can't get into their plane because they are "just that broken" after 10 years of flight, Holets said the Air Force loses a valuable, experienced pilot.

All at once, student pilots have to learn to do the maneuvers, while stressed out, listening to radios, checking instruments while experiencing a lot of these things for the first time.

This program started a little over a year ago and in that time, the program has gotten rave reviews, Holets said.

"The question always is, 'How good is this stuff?' Based upon the comments I get from students all the time, I'd say it is hitting the mark," Holets said. "The challenge we have is always showing its benefit, whether it is to the community or to Congress."