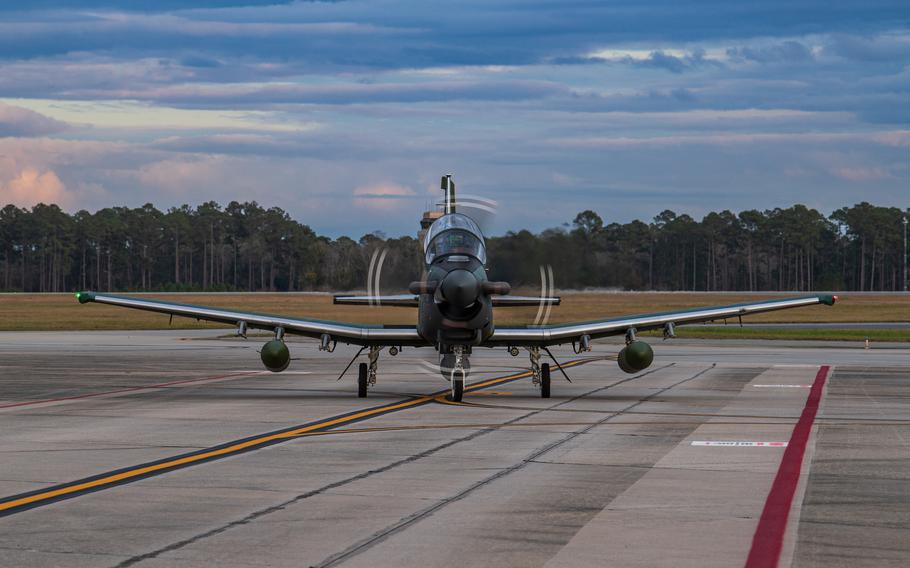 A U.S. Air Force AT-6E Wolverine taxis on the flightline during its arrival at Moody Air Force Base, Ga., Jan. 12, 2022. Pilots from the 81st Fighter Squadron, who are on loan to the 23rd Wing, will be flying the AT-6 aircraft alongside partner nation personnel. They will be working together to build the capacity and capability of the U.S. partner nations, enhancing the ability to seamlessly work together and enabling the successes of any future operation. (Andrea Jenkins/U.S. Air Force)

The 23rd Wing received two AT-6E Wolverine aircraft on Jan. 12, a statement from the base said.

The AT-6E is an armed version of the T-6A Texan II training plane.

81st Fighter Squadron pilots, on loan to the 23rd Wing, will be flying the AT-6 aircraft alongside personnel of partner nations invited to help develop tactics, techniques, and procedures to counter violent extremist organizations while also demonstrating the capabilities of the Airborne Extensible Relay Over-Horizon Network, an exportable and affordable data link, Moody said.

The collaboration, set to conclude in May 2022, will demonstrate AERONet's ability to enhance communication between partner nations and U.S. forces.

The presence of the new aircraft will not make things noisier in the surrounding area, the base said.