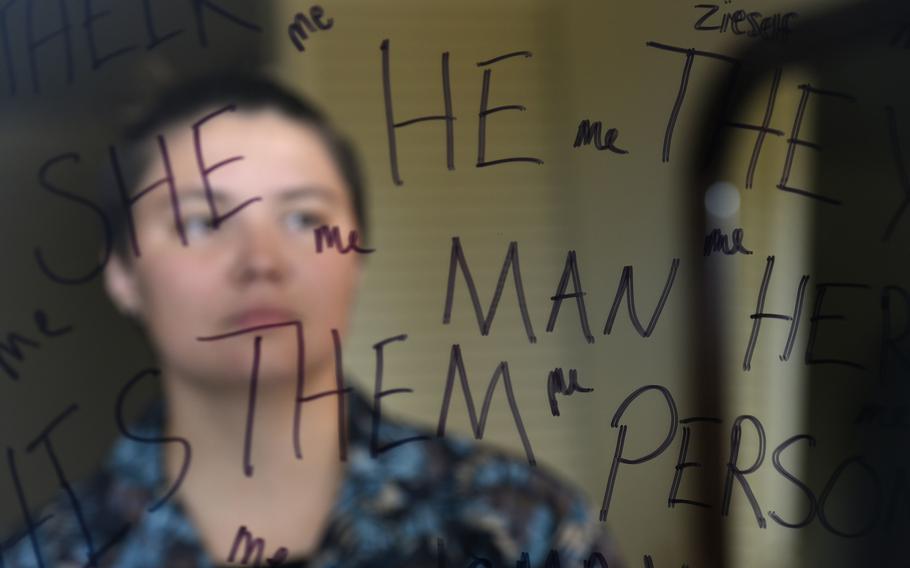 Senior Airman Max Miller looks into a mirror at home in Waianae, Hawaii, on which pronouns are written. The Air Force recently authorized the use of gender pronouns in official signature blocks. (Elizabeth Taranto/U.S. Air Force)

Citing the need for clear and effective communication, the Air Force has authorized the optional use of gender pronouns he/him, she/her and they/them in electronic signature blocks for official email correspondence.

The mandatory update will be included in the Air Force handbook, The Tongue and Quill, the service’s leading reference on writing and speaking, said an Air Force memorandum issued earlier this month.

“An inclusive force is a mission-ready force, and I’m thankful to the LGBTQ Initiatives Team for helping us realize this opportunity to be a more inclusive force,” Under Secretary of the Air Force Gina Ortiz Jones said in a statement Monday.

The Lesbian, Gay, Bisexual, Transgender and Queer/Questioning Initiative Team was created earlier this year to identify and work to resolve issues that impede the success of LGBTQ airmen and Guardians, according to the Air Force. The change was driven “by awareness of a restrictive policy that was being used against transgender Airmen and Guardians who were authentically representing themselves,” Lt. Col. Bree Fram, a co-lead of the initiatives team, said in a statement.

A Wednesday email from the Air Force’s director of diversity and inclusion that was posted over the weekend on the unofficial Air Force amn/nco/snco Facebook page says the changes “address multiple concerns from our Airmen and Guardians and promote a more inclusive environment.” Air Force officials verified the authenticity of the email to Stars and Stripes Monday.

The new guidance “promotes greater respect for and recognition of an individual’s identity,” says the email, which was addressed to Air Force diversity and inclusion officers. It states that not all names are “Anglo/Western,” and some are gender-neutral.

The use “of pronouns facilitates addressing unfamiliar names and mitigates common confusion with electronic communications,” the email says.

The Dec. 9 memorandum directing the change was sent to major commands and other Air Force agencies. It spells out how to appropriately close official email. It is available online at https://www.e-publishing.af.mil.

“Do not add slogans, quotes or other personalization to an official e-mail/social media signature block,” the document says. “The use of pronouns (he/him, she/her, or they/them) in an email signature block is authorized but not required.”

Pronouns can be placed immediately after the name in parentheses or on separate lines within the signature block, the Air Force said.

Many of more than 400 comments on the Facebook post derided the change as an unnecessary nod to political correctness when the military is faced with more pressing issues, from suicide in the force to tensions with China and Russia.

But some people with gender-neutral names expressed appreciation for the change.

“This is SO helpful. My first name is Parker so when I was (active duty) i was ALWAYS getting “Sir.” So this is great!” said one comment.

Earlier this year, the online professional networking site LinkedIn began allowing members in some countries to list pronouns beside their name in their profiles.

Members most commonly use he/him, she/her and they/them but others use different combinations, such she/they and they/he, the company said.