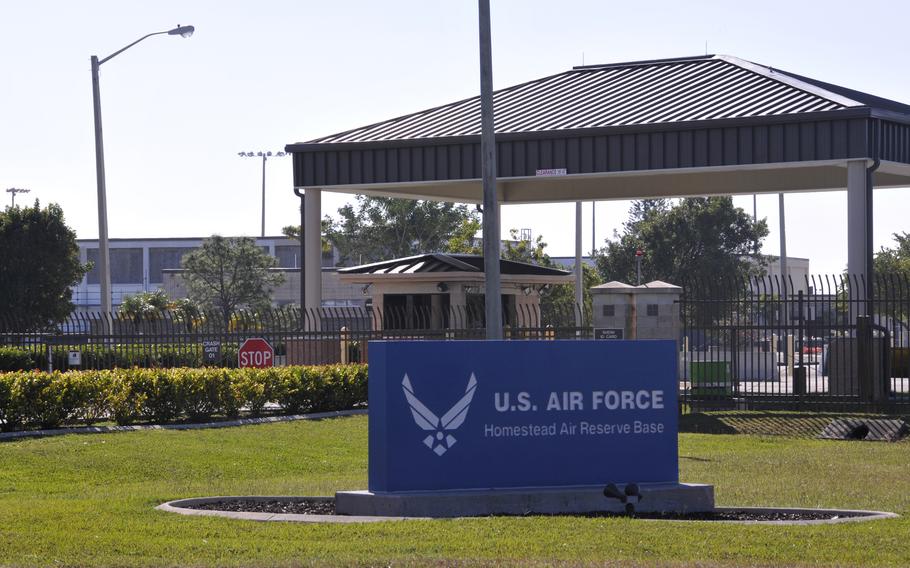 Homestead Air Reserve Base was evacuated Wednesday, Dec. 15, 2021, ‘out of an abundance of caution,’ officials said. A bomb dropped from an F-16 fighter jet on the ground caused the alarm, a source said. An explosives ordnance demolition squad was sent in to disarm or isolate the dropped bomb. (Jacob Jimenez/U.S. Air Force )

MIAMI (Tribune News Service)— The Homestead Air Reserve Base was evacuated Wednesday night after a 500-pound bomb fell off an F-16 fighter jet while it was still on the ground, a source with knowledge of the base said.

The source, who requested to remain anonymous, said the device rolled into an area near where more 500-pound explosives are stored — and added that an explosives ordnance demolition squad was sent in to disarm or isolate the dropped bomb.

Homestead Air Reserve Base said in a post on Twitter around 7:30 p.m. that the evacuation was due to “an incident involving damaged ordinance [sic].” (Ordnance means ammunition. An ordinance is a law)

Shortly before 10 p.m., the base announced that the situation was under control.

“Once the damaged ordinance [sic] was repaired, the all-clear was given. No one was injured in the incident,” the post said. “We will be providing additional information as it becomes available. The safety of HARB personnel and the local community is our top priority.”

The evacuation of base personnel was “out of an abundance of caution,” according to the post. When the incident was first announced, Tyler Grimes, the base’s public affairs chief, urged civilians and local residents to avoid the area.

Miami-Dade police asked people to avoid the area of Southwest 137th Avenue to Waterstone Boulevard from Southwest 288th Street to 312th Street. Residents in the area are advised to stay in their homes.

At around 8:30 p.m., an officer in a Miami-Dade police cruiser was blocking traffic along Southwest 127th Avenue just south of Homestead Air Reserve Park.