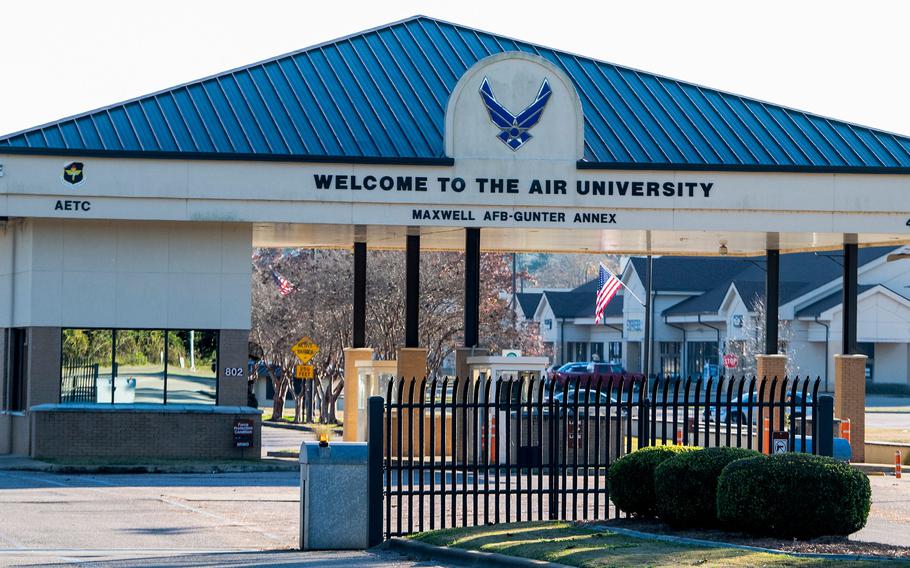 The main gate at Maxwell Air Force Base Gunter Annex in Montgomery, Ala., on Monday, December 13, 2021. (Mickey Welsh, Montgomery Advertiser/TNS)

MONTGOMERY, Ala. (Tribune News Service) — Lakiesha McCall is just as confused as the general public by the events that unfolded at the visitor center of Maxwell Air Force Base's Gunter Annex Gate, and she was the one attacked.

Officials at the base are providing few answers.

It wasn't until Monday that a spokesperson for the base acknowledged four people — two service members and two visiting civilians — were involved in the ordeal and one died. They'd previously only mentioned three people injured.

Lt. Col. Kimberly Bender, director of public affairs for Air University, said in an emailed statement Saturday afternoon that the incident occurred about 8 a.m. and that the two service members and one civilian were "evaluated for injuries" and were released from the hospital.

Bender did not answer questions regarding the injuries each person suffered or what fatal injuries were inflicted upon the fourth person.

"There is an active, ongoing investigation by AFOSI and FBI, and please contact them for more information. We thank you for your patience and understanding as the investigation continues," she wrote in a statement. "We thank the City of Montgomery for their support during this difficult time. Our thoughts remain with all those involved."

Questions to the FBI and the Air Force Office of Special Investigations were not answered.

"FBI Mobile is aware of the incident and is currently assisting the Air Force with the investigation. It is our policy not to discuss ongoing investigations," Thomas Loftis, with the FBI office in Mobile said.

McCall, 28, had gone to the gate with her sister, a recent graduate of basic training, and her mother for a friends and family event. The three arrived at the gate about 7:45 a.m. and were stopped by security forces. After being asked for a visitor's pass they did not yet have, the service member instructed them to go to the visitors annex to acquire a pass.

"So we backed the car up, parked and went into that building," McCall said. "We spoke with another officer and he asked us what we were doing and where we were going. That's when we learned we were at the wrong gate. I guess we needed to be at the other one down the road."

As the three women readied to leave, McCall said she looked out the window to see a man get out of a parked truck and run at a full sprint toward the building.

"His clothes were torn, he was holding his pants and he was running," she said. "My mom was about out the door when he pushed her down, then pushed my sister down when he got in the building and grabbed me."

McCall was stunned by the man's aggression. He pushed her head into the wall and landed several blows on her before security forces personnel inside the building could intervene.

"He reached for the officer's gun while the guard was trying to pull him off me," McCall said. "The next thing I knew, I heard a gunshot. Once I heard the gunshot, that was my getaway. There was so much blood, I didn't know if it was mine, the guard's or the man's."

McCall believes the man was having a mental health crisis and that he was known to medical professionals. She recalled hearing someone yelling and begging the officers not to kill him.

"'Don't kill him, he's mental. Don't kill him,'" McCall said she remembered hearing. "A woman, I think with the ambulance company, told me 'he's never attacked a woman before.'"

McCall wants to know why security forces outside the building did not intervene.

"The same way they stopped us, to make sure we had our credentials, the guards outside didn't do that with him," she said. "He was at a full run. They didn't do what they were trained to do."

McCall has been left in a daze.

The physical scars may fade over time, but the emotional scars likely will endure. McCall said her attempts at sleeping have been difficult.

"Every time I close my eyes, all I can see (is) him with no clothes and bleeding, being wheeled past me to the ambulance," she said. "My sister feels like it's her fault. My mom feels helpless. She feels like she's supposed to protect me as her child."