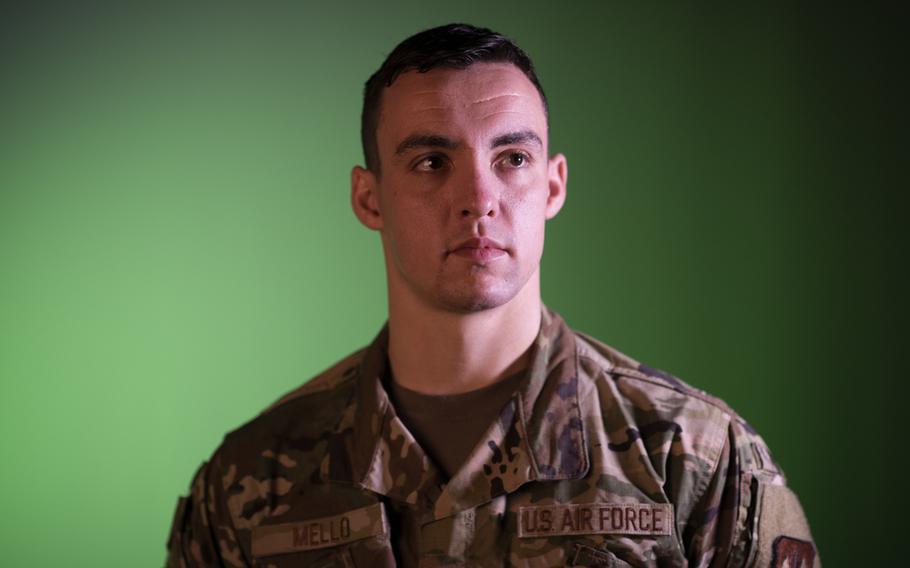 Airman 1st Class Camden Mello went missing Thursday morning. He was found after his unit launched “an all hands” search for him, Camilletti said in a Facebook video “There was no shortage of manpower” to help find Mello, the video statement said.

Mello was a crew chief assigned to the 748th Aircraft Maintenance Squadron, the Air Force said in a December 2020 statement about his struggles to adjust to his first overseas duty station.

He arrived early in the COVID-19 pandemic and was apart from his wife, Lauren, for the first time since they were in college, he said at the time. On top of that, his mother died a week after he arrived in England, he said. She was killed in a hit-and-run accident while on vacation in New Orleans, according to media reports.

Lauren Mello, his wife, joined him in England eight months after he arrived, he said in late 2020, describing how he’d relied on friends and the services of the base’s mental health facility to cope.

“Having her here with me again is the best Christmas present of all,” he said in the Air Force statement last year.

Now his wife is left struggling with his absence.

“I have no idea how I am going to make it through life knowing the plans we had made together have slipped away,” Lauren Mello wrote Friday on Facebook. “But I promise I will be strong for you. I promise I will carry on for you.”

Her husband had driven her to work the morning before his death, took her hand from her lap and brought it to his lips to give it “the softest kiss,” before pulling over to kiss her and say that he loved her. She said the same and wished him a good day at work.

“If I had even the slightest inclination that this would be the last time I saw those big puppy dog eyes stare back at mine, I would have got back in that car and told you to keep driving,” she said.

Camilletti, in his Facebook statement Friday, expressed his condolences to Mello’s family, who lives in Massachusetts. The commander also addressed airmen at Lakenheath, asking them to “keep battling” and telling them they are loved and important to those around them.

Facebook commenters offered their condolences to Mello’s loved ones and support for Camilletti’s message.

“This kind of loss is felt by so many. Rest easy,” said Chloe Hodges in the comments.

“This is the most genuine response from a commander I’ve ever seen,” said Carlos Ruiz.