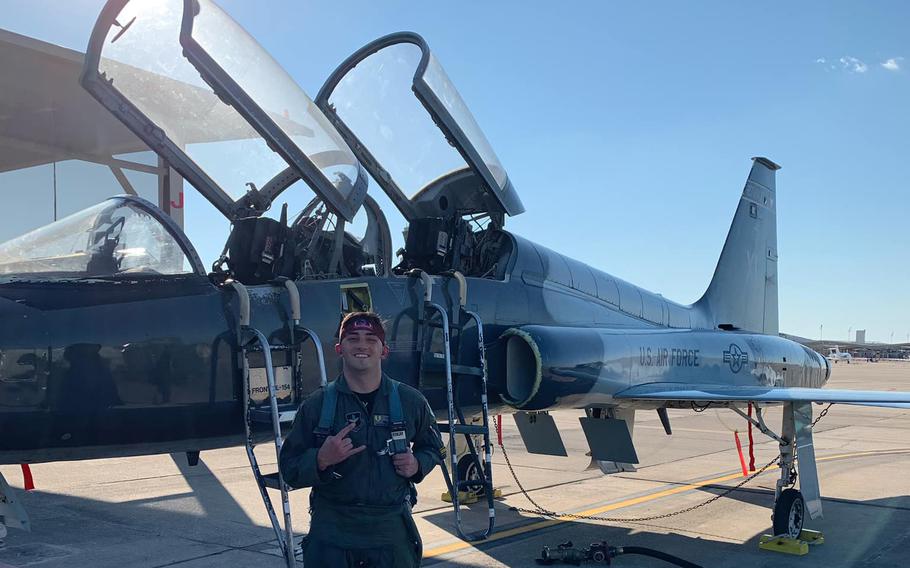 (Tribune News Service) —Second Lt. Anthony D. Wentz, a student pilot killed Friday morning in an incident involving two trainer aircraft on a runway at Laughlin Air Force Base in Texas, wanted to follow in his father’s footsteps as a pilot.

"I've always wanted to serve in the military," he said a few weeks before he graduated from Falcon High School in Colorado in 2016 and headed to a four-year appointment to the U.S. Military Academy at West Point in New York.

Two other pilots were injured in the accident that killed Wentz, 23, a member of the 47th Student Squadron, according to a news release from the 47th Flying Training Wing.

The supersonic T-38 Talon jet trainer is mostly used to prepare airmen to fly fighter and bomber planes, according to the Air Force.

The pilot in critical condition was airlifted to Brooke Army Medical Center in San Antonio, Texas, the 47th Flying Training Wing said in its release. The other injured pilot was treated and released from Val Verde Regional Medical Center in Del Rio, where the base is located, along the Texas border with Mexico.

"A loss such as this affects us all, but one thing we never fail to do in times of crisis is come together, support one another and respond," Col. Craig Prather, 47th Flying Training Wing commander, said in a statement. "Our focus remains on supporting the families involved and our thoughts and prayers continue to be with them and our teammates today."

Wentz told The Gazette five years ago that he was eager to join his brother, who was finishing his freshman year at West Point.

"One of the perks is that it's free," Wentz said. "You get a paycheck every month and a really good education."

He aspired to become an Apache helicopter pilot and was one of six Falcon High School students to receive appointments to a U.S. military service academy that year — a record for the school.

"I've been doing a lot of running, push-ups, sit-ups and pull-ups, and will try to enjoy my freedom while I still have it," Wentz had said. "It's going be a tough, crazy four years, but I can do it."

Wentz’s LinkedIn profile said he joined the Air Force in 2020 after his West Point graduation.

The cause of the incident that killed Wentz is under investigation, the news release said. Another fatal T-38C training jet crash on Feb. 19 in Montgomery, Ala. was found to be instructor and student pilot error, according to an Air Force investigation.