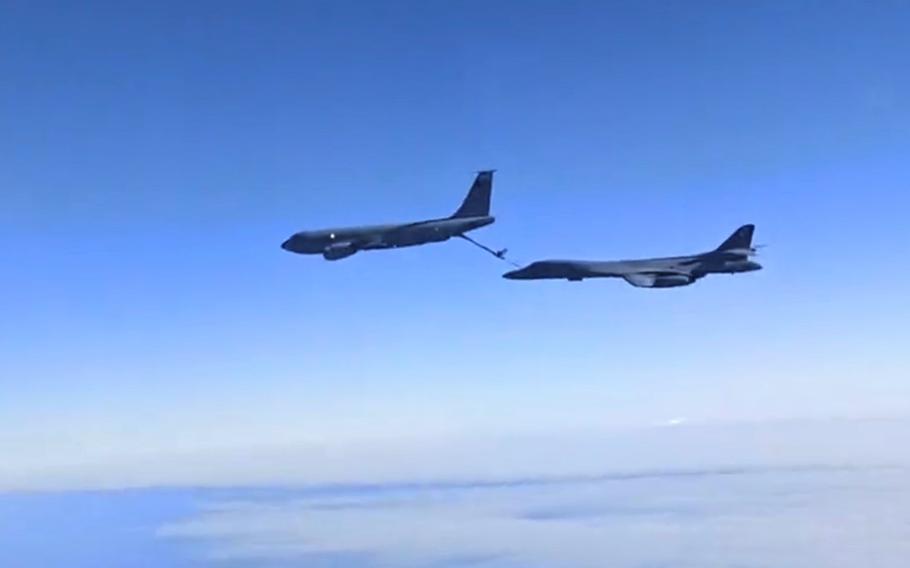 A U.S. Air Force KC-135 Stratotanker refuels a B-1B Lancer in flight over the Black Sea, Oct. 19, 2021. This still image from video was recorded by Russian crew members aboard a Sukhoi Su-30 fighter jet, which mobilized in response to the U.S. flights over international waters. ((Russian Defense Ministry))

The Russian Defense Ministry said the two Su-30 fighters had been scrambled to “prevent a violation of Russia’s state border.”

The encounter, which appears to have occurred without incident, happened amid NATO’s annual deterrence exercise Steadfast Noon, taking place this week all across southern Europe.

Aircraft from 14 NATO countries, including the U.S., are taking part in the drill. The U.S. B-1B Lancers operating in the Black Sea are from Dyess Air Force Base in Texas and have been carrying out missions across Europe as part of a bomber task force rotation. The U.S. military regularly flies in international airspace over the Black Sea, and encounters with Russian aircraft have become commonplace. While most intercepts occur without incident, the U.S. has cited instances in recent years of Russian planes flying too close to American aircraft or buzzing Navy ships on patrol.

The Black Sea has been a focal point this week for the Pentagon. Defense Secretary Lloyd Austin is touring the region, making stops in Georgia, Ukraine and Romania.

On Thursday, Austin will attend a NATO defense ministers meeting at alliance headquarters in Brussels.