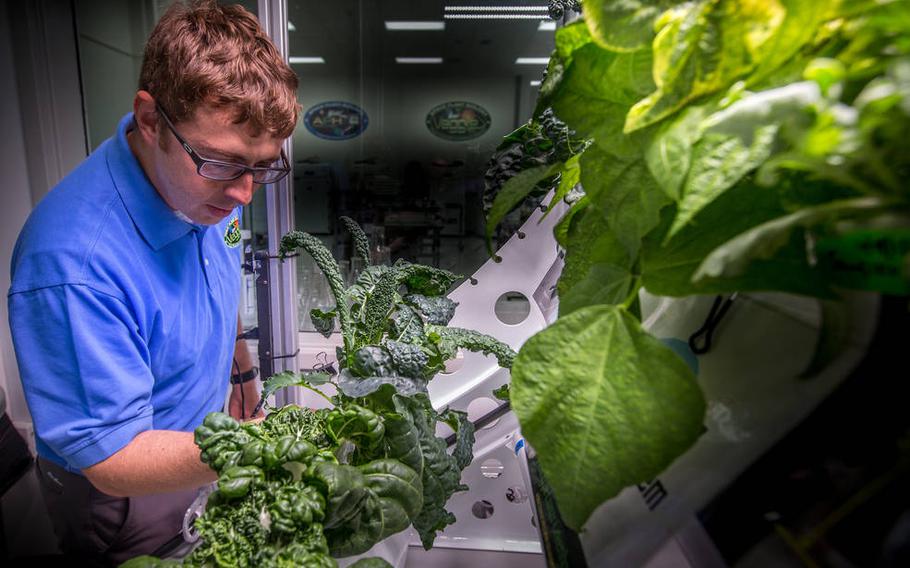 A NASA employee checks plants in the Crop Food Production Research Area of the Kennedy Space Center in Florida in 2018. U.S. Air Force Academy cadets are now pitching the idea to create a similar facility in Colorado to research food production for both terrestrial and extraterrestrial deployments. (Cory Huston/NASA)

Some Air Force Academy cadets want the service to fund a facility to study farming techniques that could someday be used on the moon to feed U.S. troops deployed in space.

The cadet club USAFA Green designed an agricultural testing facility for entry into the Air Force’s annual Spark Tank innovation challenge. While it would be based in Colorado Springs, Colo., it would allow research for “any environment,” they say.

The cadets envision a site to experiment with various farming methods that they say could support airmen and Space Force guardians deployed anywhere from the Middle East to Antarctica and far beyond.

“Our warfighters will need to feed themselves in any terrestrial or extraterrestrial environment,” Cadet 2nd Class Caroline Harshbarger says in a 2½-minute video submitted this week.

The cadets’ proposal calls for a facility with three areas to test different growing methods, including a greenhouse focused on researching aeroponics and hydroponics, techniques that use air or water, respectively, as a growing medium instead of soil. Other areas would study mushroom cultivation and more traditional methods.

The video cites a renewed U.S. focus on space, as evidenced by the launch of the Space Force in 2019 and the creation of NASA’s Artemis program, which aims to take humans back to the moon for a long-term stay and eventually to Mars.

“As we get closer to having bases on the moon and further space exploration, it is vital we have dependable and viable solutions to grow food in space,” Cadet 1st Class John Subick says in the video.

From early on, astronaut program foods were based on military survival rations or developed with the services, according to the National Air and Space Museum website.

In 1962, John Glenn was the first American to have a meal in space. It consisted of applesauce packed in an aluminum tube and sugar tablets with water.

For later Gemini and Apollo missions, freeze-dried meals were developed and produced with the help of the U.S. Army Laboratory in Natick, Mass., the museum website says.

They’re meant to feed NASA astronauts on the International Space Station and the Orion spacecraft, which is designed to take crews to the moon and beyond.

NASA has also been researching how to grow fresh food in space, conducting experiments at a desert test site in Arizona over a decade ago and aboard the International Space Station beginning in 2014.

Astronauts first got to sample freshly grown food on the space station in 2015 after they grew red romaine lettuce from seeds contained in “rooting pillows” under LED lights, according to NASA.

It might also be possible for a Mars colony to one day farm the red planet. After the release of the 2015 film “The Martian,” in which Matt Damon plays a stranded space botanist who grows potatoes to survive, NASA said the soil there does actually have the nutrients needed to support plant life.

Harshbarger says in the Spark Tank presentation video that the USAFA Green cadets want their proposed facility to be a hub for industry and university partners to work on addressing food sustainability issues for the Air Force.

It’s not the only Spark Tank submission related to both astrological and gastrological issues.

A master sergeant at the Phoenix-based 161st Air Refueling Wing proposed restarting low-gravity research using modular kits to convert KC-135 Stratotankers into something like the defunct NASA research KC-135A, which was dubbed the Vomit Comet.

“I call my innovation RALF, the Reduced-gravity Aircraft Laboratory Framework,” the master sergeant says in his video submission.