Air Force might look at Hawaii for updated radar aircraft 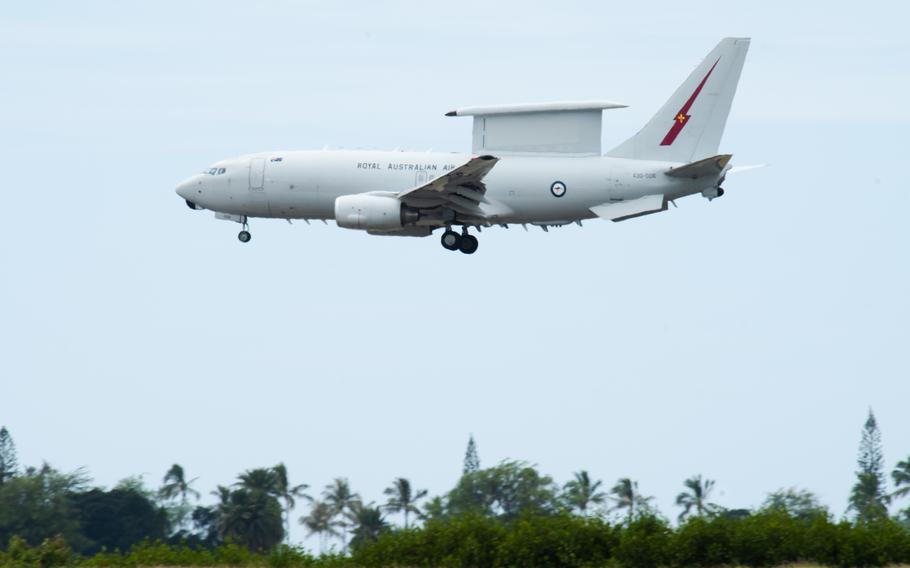 (Tribune News Service) — Hawaii didn’t get 18 Navy P-8 Poseidon maritime aircraft a number of years ago as planned, but it would be a great location for another 737 derivative, the E-7 Wedgetail airborne early warning and control platform, according to one missile defense expert.

Riki Ellison, chairman of the nonprofit Missile Defense Advocacy Alliance, said Air Force Wedgetails could soon be ordered to help guard against rapidly advancing Chinese and Russian cruise missile threats across the Pacific and as a gap-filler until space-based sensors gain greater maturity.

The aircraft would be a replacement for older E-3 Sentry Airborne Warning and Control System, or AWACS, jets with a 30-foot rotating radar dome atop the fuselage.

“You ( Hawaii) are in the center of the Pacific, “ Ellison said in a phone interview. “You don’t have overhead (space) surveillance for cruise missiles. You are going to put (Wedgetails) right there, and you are going to fly to wherever you want from there. They can go anywhere.”

Ellison said the long-range aircraft — the top unfunded requirement for Pacific Air Forces — would be a huge asset for the region as an air battle-space management platform capable of detecting hostile aircraft and cruise missiles.

The Boeing 737-700 airframe comes mated with a more powerful Northrop Grumman fixed radar that has 360-degree capability with a range of 200-plus nautical miles in all weather conditions, the missile defense advocacy group said. The E-7 “provides significantly longer detection range and vastly better discrimination and combat identification,“ according to the group.

Ellison said. Although the E-7 can provide “defense for all of the Pacific,“ it would have a Hawaii defense role in that the state will “get picked on a little bit by submarines “ and other platforms that can present a 360-degree threat.

“So this (the Wedgetail ) picks up 360,“ compared with the $2 billion proposed Homeland Defense Radar ­— Hawaii, which is facing one direction, Ellison said. That direction is North Korea.

Over the past year, Pacific Air Forces commander Gen. Kenneth Wilsbach, who is based on Oahu, and Air Force Chief of Staff Gen. Charles “CQ“ Brown, who had Wilsbach’s job in Hawaii before him, have talked up the Boeing-built Wedgetail as a replacement for the aging E-3 Sentry AWACS.

Based on the Boeing 707, the E-3 was manufactured between 1971 and 1984. A late-2020 U.S. Government Accountability Office report said from fiscal years 2011 through 2019, the E-3 fleet did not meet any of its annual aircraft availability goals.

“The E-3 faces sustainment challenges related to supply of needed parts and maintenance of the aging aircraft,“ the GAO report said.

“The fact is, we actually need something relatively quick because of the reliability of the E-3. It gets harder and harder to get airborne,“ Wilsbach was quoted by Air Force Magazine as saying.

BreakingDefense.com reported the Pacific air chief as saying that given “it’s already a proven capability, and having seen it in action, I think it’s something we do want to use.” Wilsbach flew an Australian Wedgetail in mid-April in Hawaii.

Brown, the Air Force chief of staff, said, “We are doing internal analysis, “ according to Breaking Defense. “The E-7 is a good platform. It’s flown by the Royal Australian Air Force, and the Royal Air Force is getting ready to procure some as well.”

The Missile Defense Advocacy Alliance said the Air Force has an inventory of 31 older E-3s assigned to Joint Base Elmendorf-Richardson in Alaska and Tinker Air Force Base in Oklahoma, as well as overseas at Kadena Air Base in Japan and al- Dhafra Air Base in the United Arab Emirates.

In 2008 the Navy said it planned to base 18 P-8A maritime surveillance and sub-hunting jets at the Kaneohe Bay Marine Corps base. The aircraft is a military version of the Boeing 737 with 800 and 900 series features.

Four years later the Navy indicated it was reconsidering the basing to save $300 million by consolidating all of the aircraft in Washington state and Florida. In 2014 that plan became a done deal, with periodic rotations of P-8s to Hawaii instead of the permanent basing.